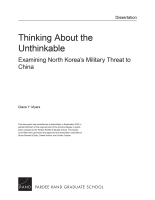 Thinking About the Unthinkable

Given the Democratic People's Republic of Korea (DPRK) and the People's Republic of China (PRC) partnership spanning for over seventy years, conventional wisdom holds that they are "blood allies." However, the inherently fragile foundations of the DPRK-PRC alliance are reflected by the PRC stating that it will not allow war or chaos on the Peninsula and will not be coming to Pyongyang's aid in the case where the DPRK initiates conflict with the ROK.

In a future DPRK contingency where the regime amasses one to two hundred nuclear warheads and carries out a major diversionary attack on the ROK in a time of serious instability, Beijing would almost certainly intervene to secure its national interests. Beijing's role as a third-party intervener would probably be adversarial against the DPRK. Kim would thus likely worry that any PRC intervention would pose an existential threat and will be prepared to take strong military action against the PRC. With inferior conventional military forces, Kim would almost certainly be forced to confront the PRC with nuclear weapons to deter or defeat PRC intervention.

Analysis of the existing literature and expert interviews revealed that the DPRK's future nuclear threat towards the PRC is under examined and frequently dismissed. However, given that the DPRK's missiles are omnidirectional, and with Kim's heavily xenophobic tendencies, including his fear that Beijing would prefer a pro-Chinese leader of the DPRK, Beijing might not be excluded from the list of Kim's future nuclear targets.

The dissertation concludes that Kim could decide to threaten nuclear weapon use against the PRC and actually use them if the PRC is not deterred, seeking to avoid a substantial PRC intervention in the DPRK. Furthermore, as the DPRK develops survivable capabilities to manage escalation against nuclear-power adversaries, Kim may become more confident that he could threaten nuclear weapon use and execute it in a limited but very deliberate manner.

This document was submitted as a dissertation in September 2022 in partial fulfillment of the requirements of the doctoral degree in public policy analysis at the Pardee RAND Graduate School. The faculty committee that supervised and approved the dissertation consisted of Bruce Bennett (Chair), Daniel Norton, and Cortez Cooper.