In 2006, the Communities Foundation of Texas allocated $5 million to the Dallas Police Department to acquire and install digital video recorders and laptop computers in patrol cars, helping the department modernize its operations. An evaluation of the initiative considered the devices' uses and frequency of use by officers, officers' opinions of the devices, and trends in the proportion of citizen complaints that led to disciplinary action. 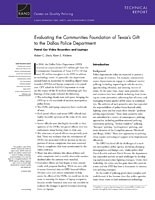 Police departments today are expected to pursue a wide range of missions beyond simple crime-fighting. With these new responsibilities come new requirements, particularly in the area of technology. In 2006, the Communities Foundation of Texas allocated $15 million to the Dallas Police Department, of which $5 million was intended to address the department's technology needs. The funds were used to acquire and install digital video recorders and laptop computers in patrol cars, helping the department modernize its operations. The foundation asked RAND to evaluate the impact of its technology gift and help it determine whether the funds were well spent. The evaluation considered the devices' uses and frequency of use by officers, senior and patrol officers' opinions of the devices, and trends in the overall number of citizen complaints and the proportion of complaints in which disciplinary action was taken as a result of video evidence. It also revealed a number of implementation problems with the video recorders that stemmed from a lack of backward compatibility between different models of video recorders. The evaluation was limited by a lack of historical data on before-and-after measures of officers' time allocation, which prevented a determination of time savings resulting from the use of computers in patrol cars.

Despite Implementation Challenges, the Value and Perception of the Technology Was Positive Overall

This research was conducted under the auspices of the Center on Quality Policing (CQP), part of the Safety and Justice Program within RAND Infrastructure, Safety, and Environment (ISE).