In 2006, the Communities Foundation of Texas allocated $10 million to the Dallas Police Department to establish the W. W. Caruth Jr. Police Institute. An evaluation of the institute's first course considered participants' opinions of the course's impact on their approach to their jobs, their relationships with supervisors and subordinates, and their sense of solidarity with their coworkers. 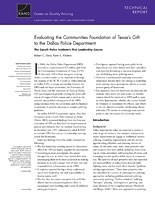 History has shown the importance of strong and effective police leadership, but it is no longer enough to learn the principles of policing early in one's career: The explosion in technology has made it essential that police managers keep current with new developments and that organizations have the flexibility to change appropriately. In 2006, the Communities Foundation of Texas allocated $15 million to the Dallas Police Department, of which $10 million was used to establish the W. W. Caruth Jr. Police Institute (CPI), a partnership between the department and two local universities. CPI was designed to provide training for police officers at all stages of their careers and to serve as the research and problem-solving arm of the Dallas Police Department. The hope is that the institute will play an integral role in supporting leadership training, staff development, and career advancement among all Dallas police officers. An evaluation of the first course offered by CPI, a leadership training course for lieutenants in which participation was voluntary, revealed that participants had favorable opinions of the course in terms its impact on their approach to their jobs, their relationships with supervisors and subordinates, and their sense of solidarity with their coworkers. The evaluation contrasted the experiences of participants with those of a control group of lieutenants in the department to determine whether there were changes in leadership style as a result of completing the course. It also included interviews with senior Dallas Police Department staff to gauge their perspectives on the course and how the institute could be used for the benefit of the department.

This research was conducted under the auspices of the Center on Quality Policing (CQP), part of the Safety and Justice Program within RAND Infrastructure, Safety, and Environment (ISE).