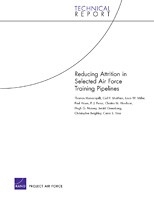 The Air Force has a continuing interest in reducing high attrition and training-block failure (washback) rates. High attrition requires a significantly greater input into the schoolhouses, increasing training and recruiting costs. High washback rates reduce schoolhouse capacity by requiring that seats be set aside for students who need to retake training blocks, and they incur greater costs by increasing training time. This report describes research into these issues for nine career fields: air traffic control, combat control, pararescue, aerospace ground equipment, explosive ordnance disposal, operations intelligence, network intelligence analysis, Far East linguist, and Middle East linguist. The authors find that significant savings can be realized through reductions in training attrition and washbacks. Interviews and focus groups provided a wealth of information that was not apparent from an analysis of the personnel and training databases. In addition, although there were concerns common across career fields, every career field studied had unique issues. This underscores the need for caution in applying findings in one career field to the circumstances in other career fields, even if they are ostensibly similar.