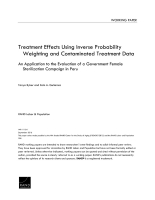 by Tanya Byker, Italo A. Gutierrez

This research was conducted by RAND Labor and Population.