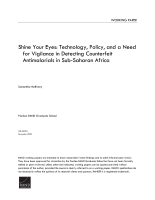 Technology, Policy, and a Need for Vigilance in Detecting Counterfeit Antimalarials in Sub-Saharan Africa

Malaria remains a significant global health problem, despite continued efforts made for its eradication. Nearly half of the world's population lives in malaria-endemic regions, with the burden resting primarily in low- and middle-income countries in sub-Saharan Africa. Malaria and the costs of treatment trap families in a cycle of illness, suffering, and poverty. Despite the efficacy of malaria treatments, malaria remains highly virulent due to the prevalence of substandard and falsified medicines. For decades, drug counterfeiting has remained underestimated and ignored, though fraudulent pharmaceuticals are on the rise in many countries because, simply put, it is a profitable business and there is high demand, particularly for lifesaving drugs such as antimalarials. These medicines, which may be produced or distributed deliberately or unintentionally, neither prevent nor cure malaria in the individuals who take them and often cause significant adverse effects and premature death. They can also cause the parasite to develop drug resistance, which is especially dangerous for those living in malaria-endemic countries.

However, there are ways in which countries can stem the importation, production, and dissemination of fraudulent antimalarials. In this report, we will first outline the problem at hand before diving into a case study of Nigeria, an impressive example of how to reduce the prevalence of substandard and falsified pharmaceuticals in a given country. We will then finish the report by discussing, at a high level, what remains to be done to continue making strides toward malaria eradication.

The research described in this report was conducted by the Pardee Initiative for Global Human Progress within the Pardee RAND Graduate School.