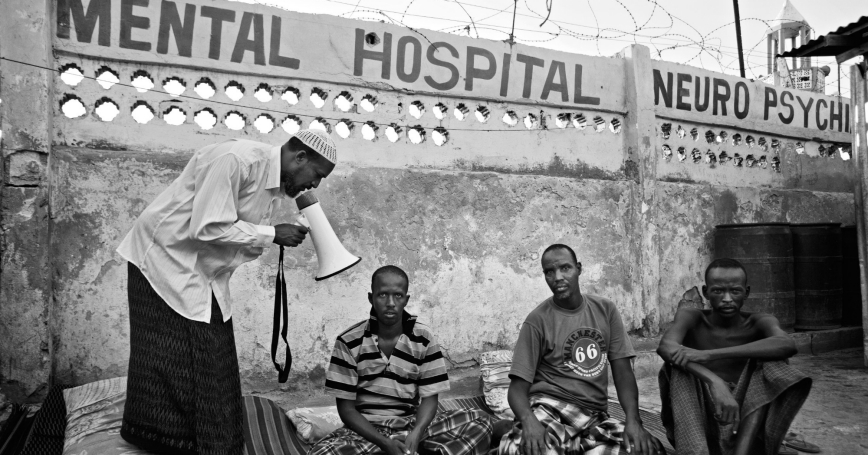 An Imam recites verses from the Koran through a megaphone in an effort to 'heal' patients with mental health problems in Mogadishu, Somalia

Depression is the leading cause of disability throughout the world and is especially prevalent among low-income African countries, where 75 percent (PDF) of the people who suffer from mental illness do not have easy access to the mental health care they need.

Besides the high unmet need for mental health services, low-income countries allocate 0.5 percent (PDF) of their health expenditures to mental health, compared to more than 5 percent for high-income countries. While mental health care providers in these countries lack the money to expand, buy needed medications, and to find and train sufficient caregivers, the cost for this absence of services is steep. Expenses related to treating mental disorders and lost worker productivity are currently estimated to cost low- and middle-income nations $870 billion a year (PDF). This is projected to soar to $2.1 trillion by 2030.

The United Nation's Millennium Development Goals (MDGs) seek to act as a catalyst to end poverty and accelerate development in low- and middle-income countries. Although the MDGs set out specific targets for defeating diseases like HIV and malaria, they failed to call for similar measures to improve mental health outcomes. Yet there is an urgent need to set up initiatives that address mental health needs in the post-2015 development agenda, which will succeed the MDGs at the end of 2015. The Secretary General's High-Level Panel, a group of experts tasked with making recommendations to the Secretary General on the post-2015 development agenda, concluded that it needs to be driven by five “big, transformative shifts.” They include diversifying economies with opportunities for all and achieving basic standard of well-being for every person. Mental health is relevant to achieving these goals.

There is little doubt that effective care for depression and other mental health disorders can lead to significant improvement in overall health outcomes. For instance, a meta-analysis of the effects of anxiety and depression on adherence to HIV treatment has shown depression to be a risk factor for patients' nonadherence to antiretroviral therapy. Addressing mental health problems must be integral to any health system strategy trying to achieve key development goals.

The World Health Organization Comprehensive Mental Health Action Plan (PDF) for 2013 to 2020 outlines targets for member countries, which include updating existing mental health policies and laws, integrating mental health care into community-based settings, and strengthening evidence-based research. One major concern of the plan is the limited research in mental health care in the sub-Saharan region. However, studies have shown that the absence of mental health treatment doesn't mean there is a lack of need.

Moreover, the stigma tied to mental disorders is also an obstacle to care. In the sub-Saharan region, this reaction is deeply rooted in cultural beliefs and associations that some communities make between mental disorders and witchcraft.

Freelance photographer Robin Hammond has put a human face on mental health challenges in Africa. In his award-winning photo book “Condemned,” he documents the absence of mental health care in conflict-affected African countries. His photographs show the deplorable conditions under which the seriously mentally ill must struggle, and the absence of help or infrastructure to address their special needs. Unfortunately, governments there have used incarceration as a solution to ostensibly prevent the mentally ill from injuring themselves and also protect the public.

Despite the challenges the region faces and the constraints that many mental health professionals labor under, new efforts aimed at improving the scenario are emerging in sub-Saharan Africa. One effort is a consortium of research institutions and ministries of health in Uganda, Ethiopia, India, Nepal, and South Africa, with partners in Britain and the WHO that was formed in 2011 to expand mental health services in low-and middle-income countries. The program runs pilot projects to measure the impact of mental health treatment programs in primary health care settings.

Another group, the Africa Focus on Intervention Research for Mental Health (AFFIRM), is working in Ethiopia, Ghana, Malawi, South Africa, Uganda, and Zimbabwe. Its activities include capacity building and conducting randomized controlled trials of low-cost, task-sharing interventions for severe mental disorders. RAND researchers (PDF) have also undertaken a three-year research project in Uganda that aims to identify an effective and sustainable approach to integrate depression treatment into HIV care. The INDEPTH project involves capacity building in depression care across 10 HIV clinics and evaluates the effectiveness, implementation, and cost-effectiveness of a protocolized approach to task-shifting depression care to providers in HIV settings.

Of course, these initiatives come with challenges. RAND's Glenn Wagner, who headed the INDEPTH project said, for example, that untreated depression is a major threat to the success and benefits of antiretroviral therapy and condom use in combatting HIV. A severe shortage of mental health professionals is another problem.

Limited access to the necessary drugs is also a complication, according to Atalay Alem, an Ethiopian researcher in psychiatry and principal AFFIRM investigator. He says he also worries about the lag time before primary health care professionals and district health bureaus make mental health care an integral part of health services. But he points out that the Ethiopian National Mental Health Strategy has laid out important directives to decentralize that nation's mental health services, which has given health professionals a better chance to improve mental health care locally.

Many mental health problems among African populations have been tied to poverty, warfare and natural disasters — problems that have displaced 10.5 million sub-Saharan Africans. The increasing number of refugees with mental health problems will likely create even greater burdens for the already under-resourced and underfunded health care services of African nations who host refugees. Development programs that respond to the mental health needs of their target population are more likely to be successful with meeting their objectives. Therefore, governments and donor countries can no longer ignore the immense need for better mental health care in Africa — or the need to better fund it.

Mahlet Woldetsadik is an assistant policy analyst at the nonprofit, nonpartisan RAND Corporation and a Ph.D. candidate at the Pardee RAND Graduate School. This blog was written for the Pardee Initiative for Global Human Progress.