How Trump Can Deter Russia and All of America's Other Enemies 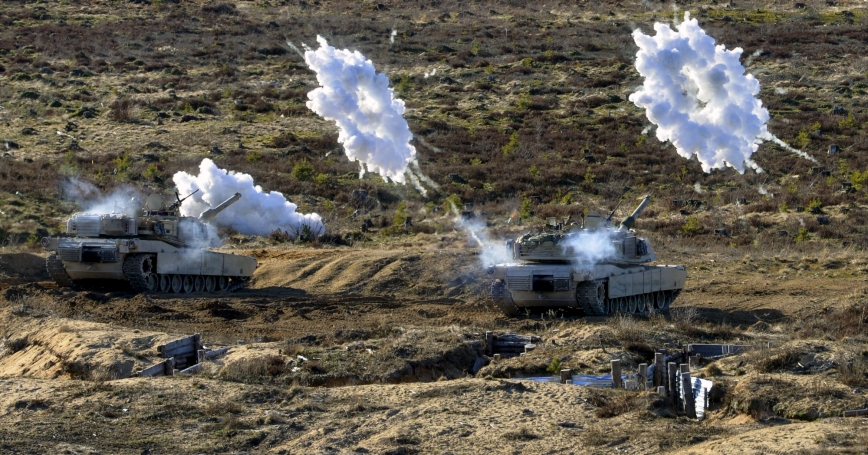 Even the word “deterrence” sounds musty. A Cold War construct, deterrence was a complicated theory and then a collection of evolving policies that kept the U.S. and the Soviet Union from a nuclear Armageddon. It was largely mothballed during the post-Cold War era.

But that was then. With a new set of threats playing out across the globe — in North Korea, Syria, the Baltic States, the South China Sea, and beyond — the Trump administration could benefit by relearning and reapplying the lessons of deterrence to this turbulent new era.

Why does deterrence matter?

First, because the American power to deter is critical to maintaining U.S. alliances, the Trump administration's problem isn't deterring other countries from attacking the U.S. with nuclear weapons. Few would doubt the U.S. willingness or ability to obliterate any nation that launched a nuclear strike against it. But, as the Obama administration rediscovered when Russia annexed Crimea and invaded Ukraine, the U.S. does have a growing problem in deterring adversaries from using conventional weapons or even “little green men” to attack weak regional states. That's destabilizing.

The second reason why deterrence matters is that security threats to the U.S. and its allies are increasing. The wars of the last quarter century, especially since 9/11, have come at great cost to the U.S. The U.S. has wrestled with protracted wars in the Balkans, the collapse of Somalia, the conflicts in Iraq, Afghanistan, Libya, and Syria, and a growing crisis over Iran's nuclear ambitions, but none of these threats were existential. Not yet. None threatened the survival of the American people, or large-scale destruction on U.S. territory. And, for the most part, none directly threatened key U.S. allies.

The threats emerging over the next quarter century are likely to be much more consequential.

The threats emerging over the next quarter century are likely to be much more consequential.

China, Russia, and North Korea are rapidly modernizing their nuclear arsenals and upgrading their delivery systems. Moscow and Beijing are also vastly improving their conventional military capabilities, shifting the balance of power and introducing new uncertainties. Chemical and biological weapons are easier to get than ever, the threat from cyber attacks seems limitless, and international terrorism is not going away any time soon.

How can the U.S. deter these threats? First, it must understand that there is no such thing as blanket deterrence. Rather, one must deter a specific adversary from taking a specific action.

Deterrence means anticipating an adversary's intentions, and influencing them. The U.S. cannot, for example, “deter Russia.” It could, however, plan to deter President Vladimir Putin from seizing Estonia in a lightning strike. Two years ago, RAND experts warned that such a scenario was quite possible. NATO and the U.S. have since taken steps to instill doubt in Russian leaders' minds that such an attack could succeed.

Similarly, the U.S. can deter North Korea from initiating a nuclear attack on the Republic of Korea or Japan, or initiating a large-scale conventional attack on the Republic of Korea. In both instances, the U.S. and its allies offer credible responses that would be both overwhelming and devastating. Yet, we don't think it is possible to deter North Korea from its pursuit of nuclear weapons — it is doing so out of a survival instinct — or its regular provocations of the south, which have brought it international attention and rewards over the decades. An end to the North Korean nuclear program would require a negotiated outcome that would likely necessitate that China be a guarantor for the regime.

A holistic approach to these threats should include ramping up U.S. government capabilities to anticipate emerging threats, including events that are unlikely to happen but would be devastating if they did. The U.S. will never succeed at “predicting” the future, but it can foresee multiple possibilities and take appropriate action.

Civilian and military planners should also develop specific policies and capabilities to deter those major threats that they can foresee. They should emphasize conventional means of deterrence more than nuclear means — America's threats need to be credible — and prepare to deter across multiple domains, including space and cyberspace. And they should tailor deterrent capabilities and messages to influence different potential adversaries. What deters Vladimir Putin might not disturb Kim Jong Un.

Finally, some threats will not be anticipated or deterred: pandemics, natural disasters, or sneak attacks, for example. Boosting national resilience could help the U.S. bounce back faster and stronger from any disasters or attacks that do occur.

Disruption may be inevitable, but more anticipation, deterrence and resilience can help.

Andrew Hoehn is senior vice president for research and analysis and Sonni Efron is managing editor, Strategic Rethink Series, at the nonprofit, nonpartisan RAND Corporation. Both are authors of the book, Strategic Choices for a Turbulent World: In Pursuit of Security and Opportunity.

This commentary originally appeared on Fortune on April 26, 2017. Commentary gives RAND researchers a platform to convey insights based on their professional expertise and often on their peer-reviewed research and analysis.