Can the Islamic State Survive If Baghdadi Is Dead? 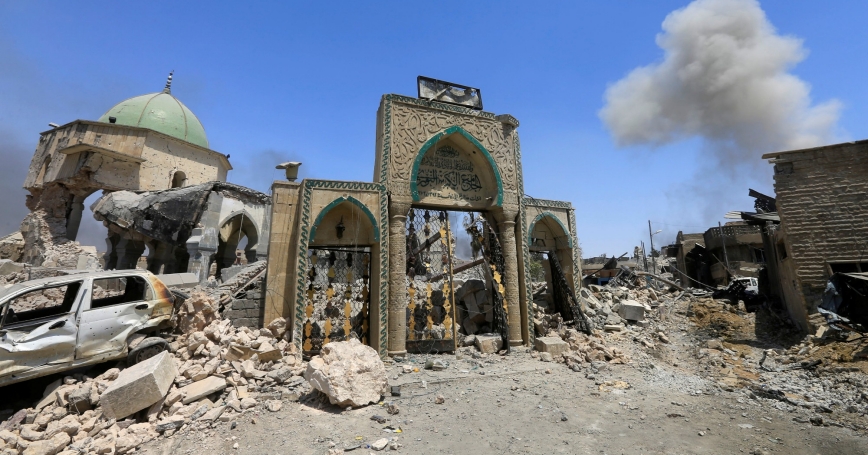 The Grand al-Nuri Mosque where Baghdadi declared a caliphate in July 2014 is seen in ruins after it was retaken by Iraqi forces from ISIS militants, June 30, 2017

If and when self-declared Caliph Abu Bakr al-Baghdadi is eventually killed, it will have little effect on the threat posed by the Islamic State to global security.

Reports surfaced in mid-June that the Russians may have killed the reclusive Baghdadi in a May 28 airstrike near Raqqa, Syria. And while skeptics pounced on the news, highlighting the dubious nature of the source, the Russians doubled down on their claim a week later, disclosing last week that it is “highly likely” Baghdadi was killed.

Even if this turns out to be true, it will merely serve as a symbolic and short-lived tactical victory in the fight against the Islamic State. The terrorist organization is not built around one man, but rather it has been designed as a global organization with official wilayats, or provinces. That makes the group at once more networked and bureaucratic than al Qaeda, and affords it with a level of built-in resiliency unique to violent nonstate actors. While Baghdadi's ascent to caliph was important in recruiting foreign fighters and building a facade of legitimacy around his state-building project, the far more important objective is to continue dismantling the organization as a whole, including its affiliates in Libya, Egypt, Nigeria, and Afghanistan.

Down, but Not Out

For the past year and a half, the Islamic State has lost significant swaths of territory, its finances have been severely degraded, and its recruiting efforts have faltered. Yet, the group continues to demonstrate its deadly global reach with recent attacks in London, Tehran, Manila, and points elsewhere. Even though it may not have had a direct hand in all of these attacks, its ability to inspire militants to act in its name demonstrates its global reach.

As operations against the Islamic State in the cities of Mosul and Raqqa gain momentum, the terrorist group has begun shifting men and materiel to its stronghold in the eastern Syrian governorate of Deir Ezzor, notably the city of Mayadeen, foreshadowing a potentially bloody conflict closer to the Iraqi and Jordanian borders.

Regardless of where the decisive battle against the Islamic State takes place, the United States will need to craft a multipronged strategy that addresses the threat posed by the group on a local, regional, and global level. Killing Abu Bakr al-Baghdadi simply isn't going to be enough — Washington needs an overarching strategy that employs all the political, economic, social, and humanitarian means at its disposal.

The primary factors that led to the rise of the Islamic State, including the Syrian civil war and pernicious sectarianism throughout the Middle East and North Africa, continue unabated. The region remains a source of violent energy, with the consequences rippling outward to pose a threat far beyond its borders. Throughout the globe, the extremist ideology promoted by the Islamic State has raised the risk of homegrown radicalization and lone wolf attacks. More specifically, the threat of returning foreign terrorist fighters should be a major concern for the West.

As the Islamic State suffers further losses in Mosul and Raqqa, its fighters may seek to flee abroad and replenish existing affiliates or expand into areas like Southeast Asia, where the group has made recent inroads in the Philippines. Failed states and ungoverned territories offer fertile sanctuary to the Islamic State and its affiliates, as well as other militant groups.

To date, the Trump administration has yet to unveil any details of its promised new strategy to combat the Islamic State, although there have been murmurs that National Security Advisor H.R. McMaster and others in the administration's foreign-policy brain trust are crafting one. The strategy has been described as very similar to Obama's counter-Islamic State strategy, with a focus on denying jihadists safe haven and support, cutting off the group's access to funding, and discrediting the ideology it has relied on to attract new recruits.

The most effective way to reduce support for terrorism is to address the root causes.

What more could be done in the ongoing fight against the Islamic State in the Middle East? On a political level, the most effective way to reduce support for terrorism is to address the root causes, which probably can be accomplished only by establishing legitimate and capable governance in areas where Sunni groups feel marginalized.

In all likelihood, these areas will need to be more well-defined than the “zones of stability” U.S. officials sometimes refer to. Iraqi provinces such as Salaheddin, Ninewa, and Anbar require, and need to be assured, genuine political autonomy. Carving out a Sunni zone in Syria will be more difficult, but decentralization of that country's political authority seems like the only realistic pathway toward reaching a negotiated settlement in the near future. The anti-Islamic State coalition can further reclaim territory from the Islamic State by continuing to focus on providing advisory support to indigenous forces. But unless there is an emphasis on reconciliation and political inclusion in these areas, any territorial gains are likely to be ephemeral.

The coalition should focus on the continued use of American airpower and special operations forces, in addition to a reliance on capable local partners to liberate territory controlled by the Islamic State. Importantly, however, the United States must also closely evaluate its current strategy to assess what it portends for the future territorial and political ambitions of the Kurds seeking greater autonomy or even independence. The United States recently announced that it would “take back” weapons it supplied to the Kurdish People's Protection Units in northern Syria after the Islamic State was defeated, although such a policy would be far-fetched in practice. The Trump administration seems to be approaching a difficult decision on whether to assuage Turkish concerns about the Kurds or to continue backing what the United States sees as the most effective fighting force on the ground.

Sound policies invariably involve tradeoffs and unknown future consequences. But a judicious use of military force, backed by a political strategy aimed at depriving terrorists and insurgents of legitimacy, should limit the Islamic State's ability to conduct attacks with impunity on a global scale, while strengthening regimes in the Middle East that are indispensable to regional stability.

If Baghdadi is dead, the Islamic State would probably move quickly to replace him and almost certainly has a process in place to pick the next leader, most likely through a Shura council, or Ahl al-Hall wa'l-Aqd (qualified people). However, the group will be careful in allowing the newly appointed leader to use the title of caliph, because that remains an honorific reserved only for those who can trace lineage back to the Prophet Muhammad, as Baghdadi supposedly could.

Nevertheless, Baghdadi's most important role has always been that of a symbol, not a military strategist. As the most visible representation of the Islamic State's state-building project, his cult of personality was most meaningful from 2014 to 2016, when the flow of foreign fighters to Iraq and Syria was at its peak.

Eliminating the self-styled caliph will not completely reduce the threat from the Islamic State, as both the ideology of Salafi jihadism and the splintered remnants of its organization will remain potent. Far more important is to continue reclaiming territory from the Islamic State, which will help diminish the appeal of its brand while eliminating its safe haven in Iraq, Syria, Libya, and elsewhere. Don't expect the death of one man to transform the fate of an entire region. Despite suffering massive losses of top-tier leadership, the Islamic State still boasts a deep bench.

This commentary originally appeared on Foreign Policy on June 30, 2017. Commentary gives RAND researchers a platform to convey insights based on their professional expertise and often on their peer-reviewed research and analysis.