NATO: Prepared for Countering Disinformation Operations in the Baltic States? 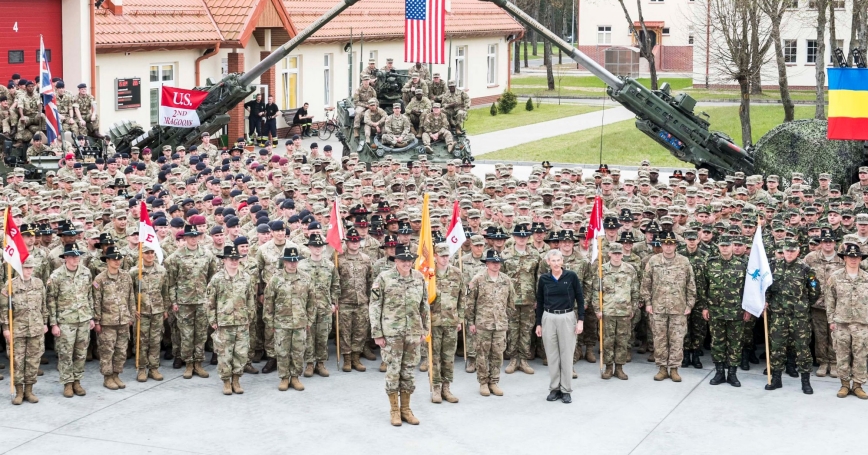 NATO plans to have around 3,000 troops in the Baltic states by the end of May as part of the Enhanced Forward Presence (EFP) — the largest reinforcement of NATO troops in the region for a generation. This represents a geopolitical shift of focus for NATO, from its earlier Central European theatre vis-à-vis the Soviet Union, further eastwards to the Baltic region vis-à-vis Russia. The aim is to demonstrate the “strength of the transatlantic bond,” reiterating to Russia the message that an attack on one ally would be considered an attack on the whole NATO alliance, an alliance which now includes the three ex-Soviet members of Lithuania, Latvia and Estonia. These NATO troops will be joining the US troops deployed there as part of Operation Atlantic Resolve that the Pentagon claimed demonstrates continued “US commitment to collective security” in Europe.

Strategic communications planning is part of preparing any military deployment; however, this deployment could face the Kremlin's sophisticated disinformation operations and propaganda in NATO territory. This represents the “geopolitics of disinformation,” currently being tracked by the Centre for European Policy Analysis (CEPA), who argue that such Russian “disinformation has specific geopolitical objectives;” namely to try to decrease public support for the NATO deployments in both the troop-sending states and the host nation countries.

The disinformation campaigns waged by Russia in the Baltic region may take different forms. NATO defence planners and decisionmakers need to prepare for “fake news” stories, which report fictional incidents and opinions. For example, a recent “fake news” story alleged that German soldiers deployed in Lithuania had raped a teenage girl. A Lithuanian police investigation determined that the report was false and that the email from which the story originated was “sent from a country outside the European Union.” Other deceptive reports include: (1) claims that bad behaviour by allied soldiers deployed in the region has become the “norm;” (2) reports that allied troops in Latvia would be permitted to roam the country with loaded weapons; and, (3) allegations that American soldiers in Latvia have been poisoned with mustard gas that have been sunk in the Baltic sea, the latter having been published on a Lithuanian news site after it was hacked. Specific disinformation was deployed “to rally the country's [Latvia's] Russian-speaking minority against NATO.” Other methods include using provocations to create incidents, such as the alleged attempts by a Russian TV crew to pay local youths to riot in Sweden. Actual incidents may also be used to give them political colour and portray the allied soldiers as disrespectful of the host Baltic states, their culture and people, as well as using compromising information published by the allied soldiers in social media. The risk of allied troops being provoked in order to discredit the alliance has also been raised by the head of the Estonian intelligence agency Estonian Information Board (EIB).

Despite Russian disinformation, the populations of the Baltic states are very supportive of the allied presence.

In this regard, the Baltic states have been heavily targeted by Russia for their eagerness to have allied forces on the ground and accused of “plotting an attack on Russia.” The Baltic states are, however, hardened and sensitised to information attacks, having learnt many lessons from their history of dealing with Soviet era Kremlin propaganda. Despite Russian disinformation, the populations of the Baltic states are very supportive of the allied presence. For example, a Lithuanian poll, carried out in December 2016, suggested that 81 per cent of respondents supported the permanent presence of NATO troops in Lithuania. Typical of Russian disinformation strategy was the rejection of the poll by the website newsbalt.ru (based in the Russian enclave of Kalingrad), which argued that the poll was skewed “to please” the Lithuanian Ministry of National Defence.

However, many of the troop-sending countries are less aware of the character of the Kremlin's information warfare. Information warfare is part of the Russian approach to non-linear warfare that encompasses old and new methods and tools. One such example is the Soviet “reflexive control” that aims to interfere with the decisionmaking processes of the adversary through disinformation and deception and the use of today's information technologies and media, not only in Russian but many other languages. It also encompasses “strategic masking,” which is spreading disinformation via media and manipulation of the adversary into believing reports of military movements. With the proliferation of information technologies and the amounts of private information that people make available online, national governments, international organisations and societies have become more vulnerable to information warfare.

It is clear that NATO needs to prepare for such disinformation campaigns. Some of the EFP framework nations have already announced that they are aware of the need to deal with these challenges. Most recently Gen. Jonathan Vance, the Canadian Chief of Defence Staff, announced that Canada will “take all the precautions” it can and noted that they “[…] have to take on a sophisticated, strategic communications role so that truth prevails.” Gen. Curtis Scaparotti, NATO's Supreme Allied Commander and the Commander of the U.S. European Command, has also suggested doing more to deal with Russian disinformation, telling the US Senate Armed Forces Committee that “I think we're focused on it, I don't think we've had enough of a response at this point.”

While the varied nature of disinformation warfare complicates preparation, NATO could pursue well-designed and holistic strategic communications approaches in the Baltic states, while also recognising the threat of disinformation beyond the region. Countering Russian disinformation requires rapid investigation of the information and its sources, establishing the facts and ensuring that the facts reach the same audiences that were targeted with the disinformation. However, reactive responses alone will likely be inadequate to deal with the threat. NATO could be more proactive and shape the information agenda with support and possibly led by the host nations. Soldiers and their commanders also could be educated on the nuances of preparing for and reacting to information warfare. The Allies might learn from Lithuania's “information influence identification and analysis ecosystem (PDF)” project that monitors and analyses physical and electronic information environments. Consulting with the NATO Strategic Communications (STRATCOM) Centre of Excellence, based in Latvia could also help, given its work on Russian information war and propaganda efforts elsewhere in the region.

In managing disinformation, allies will need therefore to strike the right balance between combating the disinformation threat and maintaining secrecy about military details. This balancing act could be a challenge for NATO and its allies. However, a proactive and open communications strategy could help to ensure that disinformation does not impact on military operations in the Baltic states. Finally, the efforts would likely need to move beyond a centralised strategic communications messaging plan and involve each and every soldier, and member of society. This could demand a higher level of information resilience, especially during the first months of the deployment.

To conclude, NATO alliance countries deploying in the Baltic states should be prepared to deal with increasing levels of disinformation, both proactively and reactively. A high level of preparation, including an open and robust communication strategy, could be crucial in tackling a sophisticated Russian disinformation campaign aimed to disrupt support for these deployments in the sending and host nations.

Marta Kepe is a defence analyst at RAND Europe. She previously worked for the Latvian Ministry of Defence.

This commentary originally appeared on European Geostrategy on June 6, 2017. Commentary gives RAND researchers a platform to convey insights based on their professional expertise and often on their peer-reviewed research and analysis.