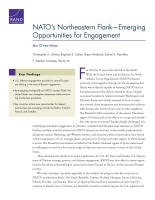 Russian aggression in Ukraine, combined with Russian snap exercises on NATO's borders, multiple aerial incursions into NATO and partner territory, cruise missile modernization, nuclear modernization, anti-Western rhetoric, and domestic political uncertainty, have forced a deep reassessment of U.S. strategy, plans, and posture in Europe and other regions in which Russia is active. Renewed tensions with Russia have important implications for Air Force strategy, posture, and regional engagement in Europe. RAND was thus asked to assess opportunities for enhanced partnering in the region in the face of Russian aggression, and the study for which this document is the executive summary focuses on the implications of the changing relationship with Russia for U.S. Air Force partnership activities in a group of key allies and partner states in northeastern Europe.

The research reported here was sponsored by the United States Air Force and conducted by the Strategy and Doctrine Program within RAND Project AIR FORCE.