Beyond Strategic Patience with North Korea: What Comes Next? 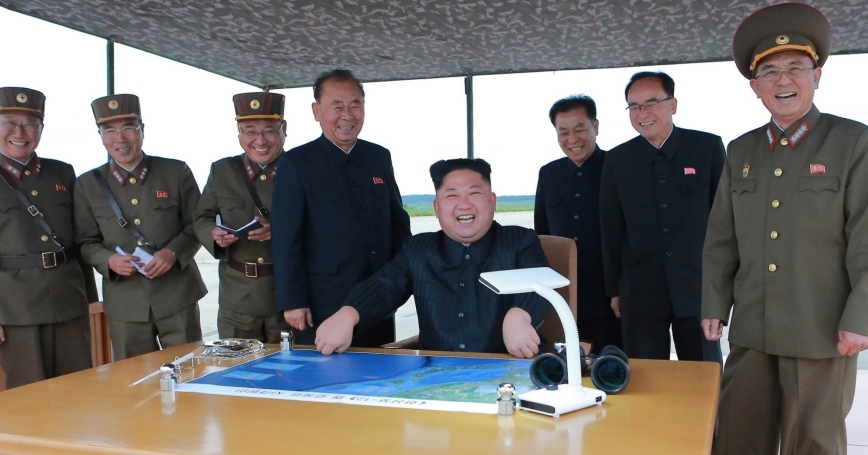 In recent weeks, the world has been on edge over the escalating tensions between North Korea and the United States. Convinced that it cannot live with the growing North Korean nuclear weapon and ballistic missile threat, the U.S. has decided to end its policy of strategic patience.

What has changed? Simply put, with the ICBM tests on July 4th and 28th, North Korea appeared to be taking the first steps toward posing an existential threat to the United States. Yet North Korea's exaggerated description of the success of those tests may have caused greater worry than is yet justified. Theodore A. Postol, a Massachusetts Institute of Technology physicist, and colleagues argued much the same in a paper published August 11th in the Bulletin of Atomic Scientists.

The July 4th test, which appeared to demonstrate a missile range adequate to cover much of Alaska, may not have carried a warhead heavy enough to accommodate a North Korean nuclear weapon. The July 28th ICBM test, while appearing to have adequate range to reach much of the United States, had a warhead that was almost certainly too small to carry a North Korean nuclear weapon, and in any case reportedly burned up on reentry (though Postol and colleagues dispute what actually burned up, saying they believe that it was the nearly empty upper stage of the missile that actually burned up). The warhead may have burned up because North Korea reduced the weight of the warhead shields in order to obtain greater range.

Unless the nuclear weapon and missile programs are reined in, at some point North Korea will be able to target San Francisco or other major U.S. cities.

Many experts in South Korea have expressed concern over what would happen to the U.S. commitment to maintaining the nuclear umbrella if U.S. cities could be targeted by North Korean nuclear weapons. In the early 1960s, French President Charles de Gaulle faced a similar Russian challenge to the U.S. nuclear umbrella. He declared that he did not think the United States would trade New York City for Paris. In the future, would the United States trade San Francisco or New York City for Seoul?

In March, U.S. Secretary of State Rex Tillerson announced the end of the “strategic patience” approach to the North Korean nuclear weapons threat. Strategic patience applied some pressure on North Korea to stop its nuclear weapons program, but still allowed the North Korean threat to grow rather than jeopardize regional peace. The U.S. is “exploring a new range of diplomatic, security, economic measures,” Tillerson said. “All options are on the table.”

The U.S. commitment to the defense of South Korea has been important since the Korean War and will be even more essential in the future.

The recent evolution of the North Korean nuclear weapon threat raises issues because the U.S. commitment to the defense of South Korea has been important since the Korean War and will be even more essential in the future. The North Korean Army and security services have perhaps three times the manpower of the South Korean Army. Since the North Korean forces are qualitatively inferior, there is a tendency to dismiss the North Korean quantitative superiority. But South Korea's military is growing dangerously small. Their Army has been reduced from 560,000 active-duty personnel a decade or so ago to 485,000 today. Those numbers could shrink to 370,000 over the next three to five years because of the country's historically low birthrate and the expressed desire of new ROK President Moon Jae-in to reduce the number of months that military draftees must serve. Within a decade, ROK Army manpower would likely drop to about 300,000.

While U.S.-ROK military qualitative superiority may win many regular battles, the sheer numbers of personnel can be more important in some fights, especially against the insurgent forces that can be expected to rise up after major battles. The 2003 U.S. invasion of Iraq raised a similar problem: Once the main battles of the conflict ended, the United States had to increase the size of its military forces in Iraq to deal with the insurgency that developed. North Korea reportedly has some 200,000 active-duty special forces, and while they are not all as capable as U.S.-ROK special forces, their covert military culture would make them troublesome in a chaotic or insurgent environment.

While many of the North Korean weapons are old and would not perform well against U.S.-ROK forces, once the supply of U.S.-ROK precision munitions is exhausted, the combined forces could lose much of their qualitative advantages.

Moreover, North Korea has some selected military advantages — areas where quantity can significantly offset quality. These include its large ballistic missile force, its massive artillery force, and its weapons of mass destruction. For example, North Korea has perhaps 5,000 to 6,000 artillery and rocket launchers within range of the Seoul metropolitan area. If even a fraction of these were fired into Seoul, they could cause substantial damage. South Korean military personnel believe that the South would significantly escalate against such an attack, likely seeking the destruction of the North Korean regime.

The Kim dynasty that has ruled North Korea since 1948 has amassed these military capabilities to deter potential U.S. action against them. Many of the theoretical options that might impede further North Korean development of nuclear weapons and missiles are unlikely, including economic sanctions that are only partially implemented by China. And other options, like military attacks on the North, could escalate to a major war that would be devastating to the region and perhaps the United States. The U.S. could also threaten to use its missile defenses to shoot down North Korean missile tests when it is determined they pose a threat.

Many experts argue that the best way to try to resolve this threat is to persuade North Korea to negotiate an end to its nuclear program. But North Korea has made it clear that it has no intention of abandoning its nuclear weapon capabilities. It says that nuclear weapons are essential to regime survival. North Korea has criticized the late Libyan leader Moammar Gadhafi for agreeing to give up his weapons of mass destruction, because he was then overthrown with U.S. help. The Kim family regime has said it will never be so foolish.

The U.S. should consider broadcasting information into North Korea that will embarrass and undermine the Kim Jong Un regime.

If the United States wants North Korea to deal, then it should figure out how to persuade the North Korean regime that it is less likely to survive by posing a nuclear threat than by cooperating with the international community. Economic sanctions and military threats apply part of the needed pressure. But the other part likely needs to include U.S. information operations aimed at North Korean internal politics. To that end, the U.S. should consider broadcasting information into North Korea that will embarrass and undermine the Kim Jong Un regime.

Kim's major concern is with his regime survival, and he appears to be extremely sensitive to any threats. His purges and brutality have reportedly alienated many of the North Korean elites. Kim is also regarded as a weak leader in many ways and is not the most capable person in North Korea, reportedly a requirement of the socialist and “juche” (self-reliance) philosophies promulgated by his grandfather in the 1950s. The North Korean economy appears to be growing as a result of capitalism, with many of the elites becoming business people.

In the past, the United States has established “red lines” that North Korea has crossed without suffering any significant consequence. The U.S. should consider pursuing a multidimensional approach — including economic sanctions, threats of military actions, and disseminating information in North Korea that would threaten its internal politics — to try to persuade Kim Jong Un that his nuclear weapons do more to jeopardize his regime than secure its survival.

This commentary originally appeared in The Ripon Forum on September 6, 2017. Commentary gives RAND researchers a platform to convey insights based on their professional expertise and often on their peer-reviewed research and analysis.