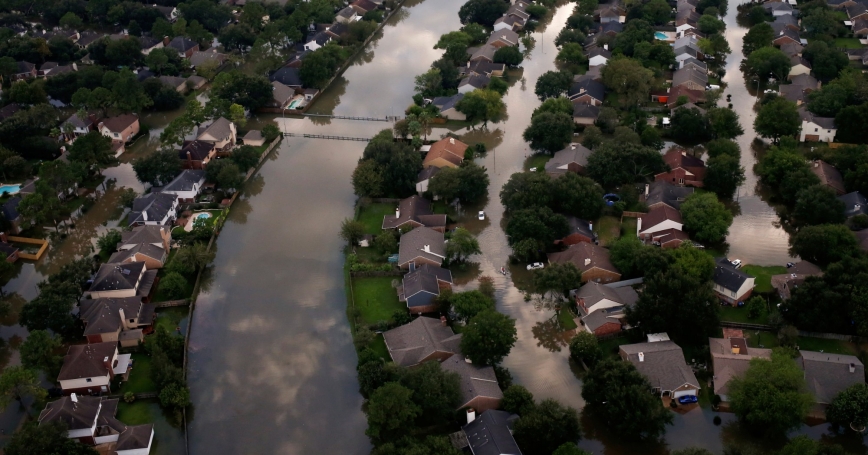 by Lloyd Dixon and Noreen Clancy

Even though the full extent of Hurricane Harvey's devastating impact is still becoming apparent, one thing is for certain—thousands of Houston-area homeowners will face massive, uninsured losses due to flood damage. It is likely that only 25 to 45 percent of the flooded one- to four-family homes had flood coverage, though precise figures for Houston are not yet available.

Consequently, the percentage of homes with flood insurance coverage that were flooded by Harvey will depend on the percentage that were outside the high-risk flood zone. Initial analysis from U.C. Davis and the New York Times suggest that roughly 60 percent of flooded homes were outside the high-risk flood zones, but more precise numbers are still coming in. It seems entirely plausible that the percentage of flooded homes with flood insurance coverage will end up between 25 and 45 percent.

People tend to ignore low-probability risks. And some people think that they have flood insurance when they do not.

FEMA has been trying to increase the percentage of households that carry flood insurance for decades through education and marketing programs, but has had limited success. Way back in 1973, Congress established the mandatory purchase requirement precisely because so few homeowners purchase flood insurance voluntarily.

High flood insurance take-up rates are desirable for the individuals affected and for society as a whole. Homeowners with flood insurance can expect reasonably quick payment from the National Flood Insurance Program (NFIP), the provider of most residential flood insurance in the United States.

The average claims payment to homeowners was about $90,000 from the Baton Rouge floods in 2016 and $65,000 for Superstorm Sandy that struck the Northeast in 2012. The picture is not so rosy for homeowners without flood insurance. FEMA's Individual Assistance Program can provide financial assistance for home repairs, rental assistance, and other needs but the average payouts are much smaller, on the order of $6,000 to $8,000 per household. Homeowners can turn to the Small Business Administration for low-interest disaster assistance loans, but not all households will qualify, and some may find it very difficult to take on additional debt on top of their mortgage payment.

Congress will most likely make some sort of assistance available through a supplemental disaster response appropriation, but it can take years for this money to reach individuals. For example, the rebuilding program Build It Back in New York City was established with supplemental disaster response funding after Superstorm Sandy in 2012 and it is still assisting homeowners repair and rebuild from that storm. Higher flood insurance take-up rates mean that individuals and their communities will recover more quickly from flooding events and taxpayers will face fewer demands to finance disaster recovery.

With this in mind, what can be done if policymakers want to increase the number of households with flood insurance? We would argue that in that case, the most effective strategy would be to extend the mandatory purchase requirement, perhaps expanding the requirement to all homes in the high-risk flood zones, regardless of mortgage. Policymakers could also consider extending the mandatory purchase requirement to the 500-year flood zone, perhaps with a lower requirement on the amount of coverage that needs to be purchased. We've seen catastrophic flooding outside the high-risk flood zones in Houston again and again, a problem that will likely only increase in coastal areas as sea levels rise, land subsides in coastal Louisiana and Texas, and development weakens natural protections against flooding.

The NFIP is set to expire in early December. While mandates are seldom popular, Congress should consider extending the mandate as it debates renewal of the program. A number of factors will need to be addressed in the discussion. For example, what should be done about low- and moderate-income households that have difficulty affording flood insurance? But even with challenges like that in mind, as Hurricane Harvey demonstrated anew, there are reasons why policymakers might decide that insurance for flooding should be more widespread.