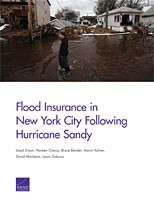 When Hurricane Sandy struck New York City on October 29, 2012, it caused flooding in all five boroughs. The storm surge reached nearly 88,700 buildings, more than 300,000 housing units, and 23,400 businesses. The federal government offers flood insurance through the National Flood Insurance Program (NFIP), a program administered by the Federal Emergency Management Agency (FEMA) since 1968, a time when affordable private insurance was difficult to find. This insurance is mandated for structures located in high-risk areas (the 100-year floodplain) if there is a federally backed mortgage on the property and is subsidized for structures that predate FEMA's first Flood Insurance Rate Map (FIRM) for the area. However, many residential structures in high-risk areas do not carry such policies. Two major changes will affect the cost of NFIP policies for structures in New York City: (1) an update of the maps that define the flood risk areas in New York and (2) legally required reform to the NFIP. Flood insurance plays an important role in addressing and managing flood risk posed. Insurance payments can help households and businesses recover from an event and get the economy moving again. When properly priced, insurance premiums can also provide appropriate incentives to avoid or mitigate risk. This report examines dimensions of the changing flood insurance environment in New York City and explores the consequences for the city's residents and businesses.

The research described in this report was sponsored by the New York City Mayor's Office of Long-Term Planning and Sustainability and conducted in the Center for Catastrophic Risk Management within RAND Justice, Infrastructure, and Environment.