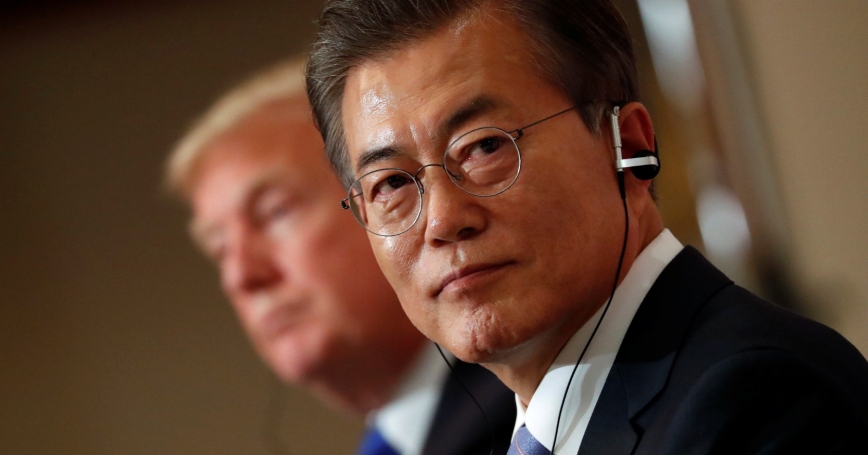 As 2018 begins, tensions in Asia continue to mount. North Korea is increasing the range and sophistication of its nuclear weapons and ballistic missiles as well as its cyber capabilities; China is building up its military, militarizing artificial islands, repressing human rights, and engaging in coercion against Japan, South Korea, Vietnam, Taiwan, and India.

To preserve the “free and open Indo-Pacific” that has served as the basis for peace and prosperity in the region, the United States needs the help of other regional stakeholders, particularly its South Korean and Japanese allies. Unfortunately, while Washington and Tokyo are well-coordinated on messaging and policy, the Moon Jae-in administration in Seoul has taken a number of steps that are driving a wedge in relations with Tokyo, despite Moon's promise this past June not to let historical issues hamper the development of cooperative ties with Japan.

During Moon's December state visit to China, a country that waged economic warfare against the South for more than a year over Seoul's decision to permit the United States to deploy a Terminal High-Altitude Area Defense (THAAD) battery on the peninsula, Moon focused on remembering the Sino-Korean experience of Japanese invasion and colonization in the early 20th century. He even went so far as to commemorate the 80th anniversary of the Nanjing massacre perpetrated by the Japanese Imperial Army.

Moon's solicitous approach is unlikely to earn him any leverage with Beijing. His humiliating treatment while in China — where he was met at the airport by an extremely low-ranking foreign ministry official, was refused a lunch with Prime Minister Li Keqiang, and suffered the indignity of watching members of his own traveling press corps beaten by Chinese security guards — gave a clear indication of what such efforts will elicit from Xi Jinping in terms of gratitude.

Additionally, despite the intensifying military threat from North Korea, the Moon administration opted to go ahead with a military drill to defend the disputed Liancourt Rocks, even though Tokyo has never evinced any signs of planning to use force to regain them. And just two years after the previous South Korean government inked a deal with Japan to resolve the “comfort women” issue “finally and irreversibly,” the Moon administration announced that it believes the 2015 agreement “contained major flaws” and “does not resolve the issue.”

Seoul has even dragged the United States into its disagreements with Japan during the bilateral U.S.-Korea summit in early November. At the state dinner, Moon served President Trump a dish called “Dokdo shrimp,” the Korean name for the Liancourt Rocks. Going one step further, the Korean hosts ensured that a prominent former comfort woman who opposed the 2015 agreement was photographed with the U.S. president in a move intended to suggest Washington is siding with Seoul against Tokyo on the issue.

To be sure, Japanese politicians have made historically insulting comments in the past and hurt bilateral ties with visits to the controversial Yasukuni Shrine. But in recent years, Japanese Prime Minister Abe Shinzo has avoided touching on sensitive historical issues, and Tokyo has upheld its part of the 2015 agreement. While many Koreans are unhappy with that deal, Japanese observers note that every time they sign an agreement to resolve historical issues with Korea, the goalposts seem to move, pointing out that both the 1998 announcement that liberal President Kim Dae-jung made with Japanese Prime Minister Obuchi Keizo to resolve their differences and the 1965 normalization agreement between the two countries also purported to put the historical tensions between the two sides to rest.

Tokyo's response to Seoul's moves has been measured, though Prime Minister Abe is unlikely to attend the PyeongChang Winter Olympics and the country is weighing recalling its ambassador for the second time in under a year. Any degradation of bilateral ties would be unfortunate, especially at a time when the threat from Pyongyang is growing since Japan serves as the most crucial rear-area logistical support hub and force-flow jumping off point for U.S. and UN troops in the event of a war with North Korea. If that nightmare day ever arrives, cooperative ties with Japan will ensure a much more rapid response by the United States and others to help South Korea.

To date, Washington unfortunately has neglected to make clear to Seoul how such unhelpful moves work against not only U.S. interests, but Seoul's security as well. In the past, Washington successfully pressed leaders from both Seoul and Tokyo to set aside their differences and focus on their common interests. For example, in 2014 the United States brought them into a trilateral information-sharing agreement that was subsequently used for monitoring North Korean missile launches; the three sides have also participated in a collective missile-tracking exercise as well as a naval search-and-rescue exercise.

They can, and should, be advancing these examples of success into other realms. For the sake of U.S. national security, the U.S.-ROK alliance, and South Korea-Japan relations, it may be time for Washington to take a more active role in encouraging Seoul to find ways to cooperate with Tokyo in confronting the threats posed by the region's revisionist actors, rather than picking fights with its democratic neighbor.

This commentary originally appeared on The Diplomat on January 6, 2018. Commentary gives RAND researchers a platform to convey insights based on their professional expertise and often on their peer-reviewed research and analysis.