Can Europe Save the Iran Nuclear Deal? 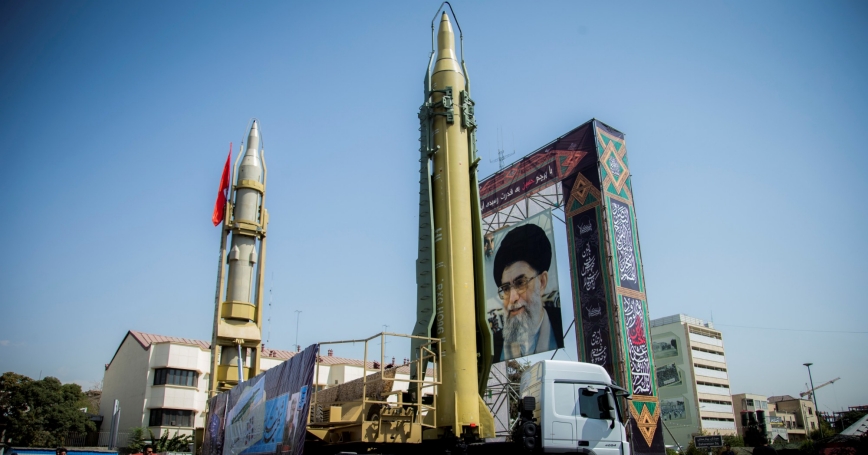 A display featuring missiles and a portrait of Iran's Supreme Leader Khamenei at Baharestan Square in Tehran, Iran, September 27, 2017

In his recent meeting with Donald Trump, Israeli Prime Minister Benjamin Netanyahu again urged the United States to fix the Iran nuclear deal—or else abandon it. The U.S. president has always seemed eager to scrap the Iran deal, calling it “the worst deal ever.” Soon we will know if he'll get his wish.

Since October, Trump has signaled that the United States was prepared to leave the nuclear agreement, which the United States, Russia, China, Europe, and Iran agreed to in 2015. All the other parties believe the accord is working, but the president gave Congress 60 days to improve the deal or kill it. They chose neither. In mid-January he waived the nuclear-related sanctions, a necessary step for the deal's survival, but he threatened to withdraw if Europe does not “fix” the agreement within four months. The critical question between now and mid-May is whether Europe can save the Iran deal.

There are viable steps Europe could take to address the concerns about the deal Trump outlined in his January address, particularly on missile development, inspections, and sunset clauses.

We recently joined colleagues from three European think tanks in offering concrete proposals that, while politically feasible, would require compromise on both sides of the Atlantic. These measures are consistent with the strongly stated European position that they will not renegotiate the agreement, only strengthen or supplement it. Needless to say, the other parties to the agreement—the Russians, Chinese, and Iranians—are far less amenable to American concerns given there is wide international consensus, backed by multiple International Atomic Energy Agency assessments, that Iran is adhering to the deal.

We proposed a number of measures, including utilizing mechanisms within the agreement to strengthen nuclear inspections. We also suggested pursuing side agreements that would consider extensions to the agreement in the future as well as regional cooperation forums to address wider regional security issues outside the deal's scope, particularly missile development.

The State Department is reportedly seeking to secure an agreement along these lines with the European parties to the original deal, formally known as the Joint Comprehensive Plan of Action. Whether Washington's European partners will agree and whether this will be enough to satisfy the White House remains to be seen.

Europe could work with other international powers to keep the deal alive without U.S. participation.

Our transatlantic group put forward a Plan B. If the Trump administration withdraws the United States from the agreement, Europe could work with other international powers to keep the deal alive without U.S. participation. This will require a “soft exit” that would secure American agreement to delay enforcement of secondary U.S. sanctions so European and other international companies could continue trading with and investing in Iran without the threat of their losing the American market. Such an arrangement would also avoid a transatlantic trade war and the re-imposition of European blocking sanctions that would penalize companies for adhering to U.S. sanctions.

If the Europeans and others manage to keep the deal in place without triggering a major transatlantic rift, the door would be left open for the United States to rejoin the agreement at a future time. But for this backup plan to work, Iran has to want to stay in the deal when the United States leaves. This outcome is far from certain.

Iran recently signaled it may leave the agreement if it does not receive the economic benefits that Iranians expected to result from the deal. Iranian leaders, including President Hassan Rouhani, Iran's most prominent proponent of the nuclear accord, are facing increased domestic pressure following widespread protests across the country in recent months. Rouhani has not been able to deliver on high expectations that the nuclear agreement would help bring economic relief to ordinary Iranians, who are struggling with high unemployment and losing patience with corrupt governance.

The uncertainty sparked by Trump's threats to leave the deal has already had a chilling effect on international trade with and investment in the country, even without the formal collapse of the agreement. Such disenchantment may only weaken public support for the accord and the leaders who promoted it, giving hardliners who never liked the nuclear accord an opportunity to blame the United States and deflect attention from their own failings.

Europe will likely seek to preserve the Iran agreement with or without the United States. Iran will probably seek to shift the blame for its collapse onto Washington. If the United States and its European allies cannot find a common path forward, the result is likely to be a resumption of Iran's nuclear program, a transatlantic trade war, and a widespread view that the United States is responsible for both.

Dalia Dassa Kaye is director of the Center for Middle East Public Policy and senior political scientist at the nonprofit, nonpartisan RAND Corporation. James Dobbins is a senior fellow and Distinguished Chair in Diplomacy and Security at RAND, a former assistant secretary of state, and the author of “Foreign Service: Five Decades on the Frontlines of American Diplomacy.”

This commentary originally appeared on Reuters on March 12, 2018. Commentary gives RAND researchers a platform to convey insights based on their professional expertise and often on their peer-reviewed research and analysis.