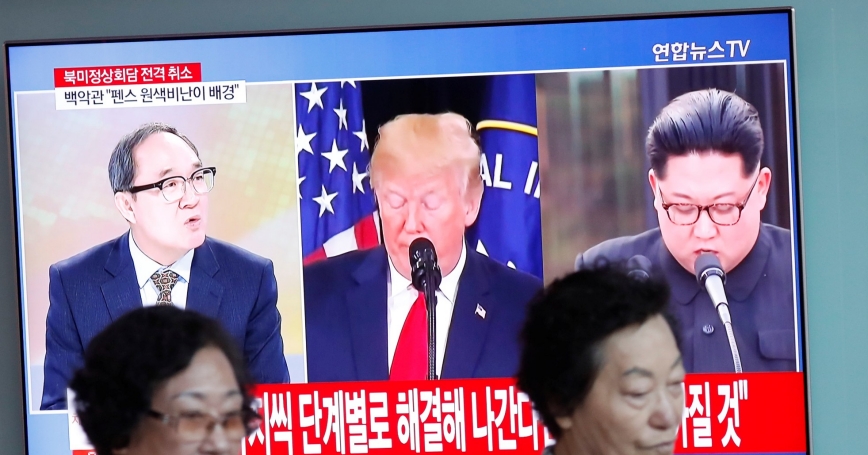 Women walk past a TV broadcasting a news report on the cancelled summit between the U.S. and North Korea, in Seoul, South Korea, May 25, 2018

The June 12 Trump-Kim summit seems to have fallen victim to White House message indiscipline. Anyone familiar with Muammar Gaddafi's demise should have suspected that the Libya model of denuclearization was unlikely to appeal to the young North Korean dictator.

Yet, National Security Advisor John Bolton proved unable to avoid the analogy. This led to a sharp North Korean reaction following which President Trump himself stepped in to correct the record, stating that he could accept a phased approach to denuclearization. He also assured North Korean leader Kim Jong Un that he would be safe and his country prosperous as a result.

Then Vice President Mike Pence, who apparently had not received the memo, repeated the Libyan reference, sparking yet a second sharply worded North Korean protest. Shortly thereafter, Trump canceled or at least indefinitely postponed his meeting with Kim.

Are we back to debating whose button is bigger? Perhaps. But in his letter to Kim, Trump left open the door for a future get together. Kim may not take up Trump on his invitation to give him a call, but it is possible that Secretary of State Mike Pompeo, who seems to have handled the dialogue with Kim more deftly than his colleagues in the administration, can resume preparations for an eventual meeting between the two leaders.

If the result is a more deliberate and methodical move toward summitry based on more realistic expectations for the outcome, this experience might even prove salutary.

For the moment, however, the U.S. position is weakened. China and South Korea, the two countries whose cooperation is essential to any campaign of maximum sanctions, will likely hold the United States principally responsible for this setback.

For many observers in the international community, Kim will seem the more reasonable of the two leaders. In the U.S., some will criticize Trump for agreeing to the summit in the first place, others for canceling it. Few will argue that this was deftly handled.

Even if Trump had succeeded in securing a commitment from Kim to complete denuclearization, the chances of full implementation were slim, and not just because North Korea would likely fail to follow through.

Nuclear diplomacy with North Korea can succeed only if it produces and sustains relationships with all the essential parties in support of implementation of any deal reached.

In 1994, Kim Il Sung, grandfather of the current North Korean leader, agreed to dismantle his nuclear program in exchange for American fuel oil to offset the loss of nuclear power and new proliferation-resistant nuclear reactors to eventually replace those being dismantled.

Neither side fully delivered on these promises. President Bill Clinton could not persuade Congress to fully fund the fuel oil program or get Japan and South Korea to provide the new reactors. North Korea, for its part, began a clandestine nuclear-enrichment program.

President George W. Bush chose to walk away from this Clinton-era agreement rather than try to fix it, only to repeat the cycle of agreement and flawed follow-through during his second term.

Nuclear diplomacy with North Korea can succeed only if it produces and sustains relationships with all the essential parties in support of implementation of any deal reached.

Any agreement between Trump and Kim would, at best, only be the opening of a multi-year process of denuclearization and reciprocal economic benefits, a process that has already failed twice for lack of follow-through.

Success will require tending and fostering American relations with China, Japan and South Korea while forging an entirely new relationship with North Korea.

It's called foreign relations for a reason. For enduring results, President Trump will need to move beyond the art of the deal to also master the art of the relationship.

James Dobbins is a senior fellow and distinguished chair in diplomacy and security at the nonprofit, nonpartisan RAND Corporation, a former assistant secretary of state, and the author of “Foreign Service: Five Decades on the Frontlines of American Diplomacy.”

This commentary originally appeared on The Hill on May 25, 2018. Commentary gives RAND researchers a platform to convey insights based on their professional expertise and often on their peer-reviewed research and analysis.