A Democratic Spring Could Be Stirring in Eurasia. The West's Quiet Support Can Help 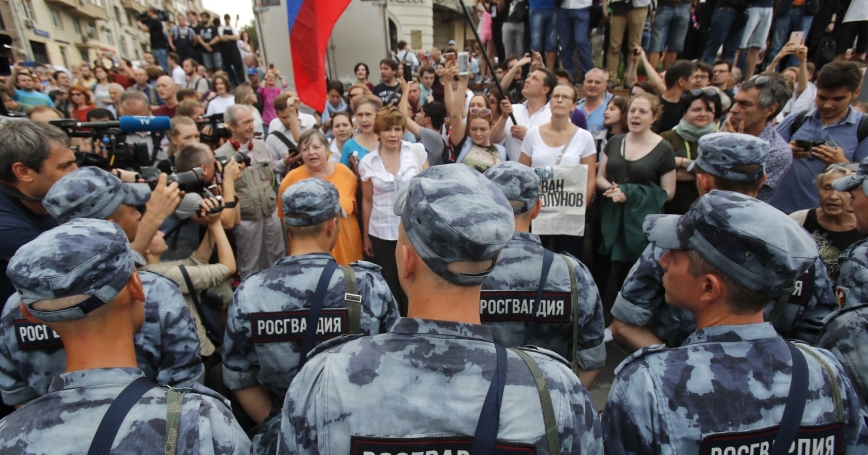 Despite worldwide pressures on democratic norms, the post-Soviet space is seeing more signs of political expression. Beyond the Baltics, which became democracies early on, Ukraine, Georgia and now Armenia are leading the way. Political unease, often driven by socio-economic and environmental concerns, is challenging lethargic and authoritarian regimes, including Russia. This change is organic and could benefit from quiet Western support.

In Russia, recent polls show public trust in President Vladimir Putin has declined to 31 percent, and 45 percent of Russians say their country is going in the wrong direction, a 12-year high. The popular tendency to defer to the center on political decisions also seems to be falling. These sentiments may be playing out in public protests, such as those across the country last year against raising pension ages, and last month in Yekaterinburg against plans to build a church in a beloved green space which led to its cancellation. Days ago some 7,000 people rallied in the Komi Republic against the “colonial politics” of creating of a landfill in nearby Archangelsk region for garbage from Moscow.

Over the weekend in a striking show of support for an investigative journalist arrested on drug charges that are widely seen as fabricated, three of Russia's most prominent newspapers ran the headline, “We are Ivan Golunov.” In a stunning and rare reversal, on June 11 the authorities dropped the charges, prompting protests demanding punishment for those responsible for detaining the journalist.

A significant democratic win came in April with a competitive presidential vote in Ukraine. Political outsider Volodymyr Zelensky leveraged unhappiness with the economy and corruption to trounce Petro Poroshenko.

Last year the Velvet revolution in Armenia ousted entrenched leaders and brought to power a reformist opposition, led by Nicole Pashinyan. His government is faced with delivering on promised reforms while not upsetting Armenia's security partner, Russia. Even in Alexander Lukashenko's Belarus, green civil society groups are organizing. In Kazakhstan citizens are raising their voices against a surprise move in March to rename the capital city after first President Nursultan Nazarbayev. Nazarbayev resigned as president in March, and a staged election on June 9 of a successor who lacks an independent political base brought thousands of protesters into the streets.

As countries still struggle to overcome an authoritarian Soviet legacy, what does the historical record show?

First, countries whose people see themselves as European have made the most democratic progress. Within 13 years of independence Estonia, Latvia, and Lithuania met exacting standards to join the European Union and NATO. Most Georgians and Ukrainians see themselves as European, and their countries are gradually developing as democracies and deepening ties with the West. This isn't to say there's something quintessentially European about desire for democracy, or vice versa. But the combined allure of European markets and current ideas and practices of accountable government is stimulating vital reforms.

Second, popular uprisings can help overcome stagnation. Georgia's Rose revolution in 2003 elevated to the presidency opposition leader Mikheil Saakashvili, who accelerated reforms and Georgia's path toward Europe before being undone by his own errors. The 2013-14 Maidan revolution led to a government in Kyiv that ably organized resistance to aggression, but voters have judged it did too little to improve living standards or stem corruption. The Velvet revolution in Armenia succeeded through mass mobilization and non-violent tactics. A popular uprising can also yield disappointing results, as with Ukraine's 2004 Orange revolution.

Third, Central Asian states and Azerbaijan, less immediately tied to the West, have lagged in political development. An exception is Kyrgyzstan, the only one to have had multiple political transitions through open, contested elections. Increased expression in Kazakhstan and a loosening of controls in Uzbekistan offer hope, but the outlook is clouded. Freedom House classifies all six Central Asian states except Kyrgyzstan as “Not Free (PDF),” a ranking shared also with Belarus and Russia.

Fourth, leaders may be more vulnerable if citizens are unhappy with living standards and corruption. Running on these themes, Zelensky beat Poroshenko, who missed the beat by campaigning on “Army, Faith, and Language.” The pension protests in Russia may have been propelled in part by the steady decline in personal incomes in recent years. In Armenia the new government seems aware of the need to improve people's lives; last February it unveiled a reform program to decrease poverty. Some observers are concerned, however, that Pashinyan is moving too slowly and not promoting reformists.

An incipient Eurasian “democratic spring” may not yet be on the horizon, but political awareness and civil society are gaining ground.

An incipient Eurasian “democratic spring” may not yet be on the horizon, but political awareness and civil society are gaining ground. Signs of grass roots popular activism and resistance to lethargic, corrupt leaders show that democratic and European ideas still hold substantial appeal. Yet, democratic progress is uneven, with no progress in a few countries and backward steps in Russia.

If policymakers opt to do so, the West could make a quiet contribution by continuing to help to fill information vacuums for those who face restricted media environments, and by offering training and support for nurturing civil society, conducting free and fair elections, and developing competitive politics.

Denis Corboy was director of the Caucasus Policy Institute at King's College London and EU ambassador to Georgia and Armenia. William Courtney is an adjunct senior fellow at the nonprofit, nonpartisan RAND Corporation and a former U.S. ambassador to Kazakhstan, Georgia, and a U.S.-Soviet commission to implement the Threshold Test Ban Treaty. Kenneth Yalowitz is a global fellow at the Wilson Center, former U.S. ambassador to Belarus and Georgia, and an adjunct professor at Georgetown University.

This commentary originally appeared on Newsweek on June 12, 2019. Commentary gives RAND researchers a platform to convey insights based on their professional expertise and often on their peer-reviewed research and analysis.