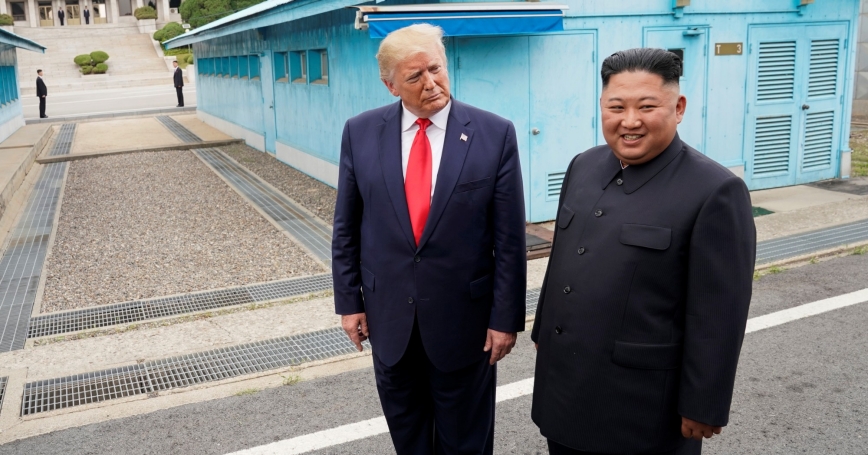 On Saturday Korea time, President Trump tweeted that he would be in South Korea over the weekend. “While there, if Chairman Kim of North Korea sees this, I would meet him at the Border/DMZ just to shake his hand and say Hello(?)!” Later, Trump said, “If he's there we'll meet for two minutes.”

Many pundits have concluded that this was political grandstanding. But they may be missing the significance of this act. In American culture, if I visit a place where a friend or relative lives, I will usually make every effort to at least go see that friend or relative and say a two-minute “hi.” So from a U.S. cultural perspective, President Trump was making it very clear that he considers Kim Jong Un to be a friend.

Remember that Article 1 of the June 12 Singapore Summit Agreement says that, “The United States and the DPRK commit to establish new U.S.–DPRK relations…” This form of last-minute visit just because the president was in the neighborhood is very much in the spirit of Article 1, and very different from past U.S.–North Korean leadership relationships. Trump was very clearly fulfilling a part of the Singapore Agreement. Presumably, he was hoping that Kim Jong Un would also fulfill something in the denuclearization part of that agreement. This may not be just a show—it could be very important.

Then, contrary to President Trump's initial two-minute concept, he met with Kim for almost an hour. While very little is known about the substance of that discussion, there reportedly was agreement for follow-on negotiations at the working level. Many analysts are very hopeful that this working-level negotiation could lead to another summit meeting and meaningful progress on denuclearization.

But it will be meaningful only if Kim decides to take action beyond just talking about denuclearization. Since he promised to denuclearize in early March 2018, Kim has taken some confidence-building measures, but he has not surrendered a single nuclear weapon, and he has apparently not even suspended production at a single nuclear weapon production facility. Instead, he has reportedly increased his nuclear stockpile over the last roughly 16 months. That is the opposite of denuclearization.

Working-level talks between the U.S. and North Korea will be meaningful only if Kim decides to take action beyond just talking about denuclearization.

Kim reportedly claims that his problem is with hardliners at home who are opposed to any form of denuclearization. But if that is true, why didn't he at least stop building more nuclear weapons? Indeed, Kim has had his Korean Workers' Party instruct the North Korean elites that there will be no denuclearization.

So the success of any potential working-level talks could depend upon whether or not Kim decides that he will actually take some denuclearization actions. Is he sincere about being willing to denuclearize? Kim has said many words about being prepared to denuclearize, but none of that is worth very much unless he decides to act consistently with his words.

In return, Trump could offer to work with the UN Security Council to allow for the opening of the Kaesong Industrial Complex—a major concession, and something U.S. ally South Korea very much wants. Any opening of the Kaesong Industrial Complex would have South Korean firms working with North Korean firms to arrange the manpower.

Kim has repeatedly also asked for a guarantee of regime survival. President Trump's staff has already assured Kim that the United States will not seek his overthrow, and the president may have given Kim a similar, personal assurance on Saturday.

But in reality, it appears that the major threat to the Kim family regime's survival comes from hardliners inside North Korea not from the United States. The United States cannot solve that problem for him.

This commentary originally appeared on The Hill on July 2, 2019. Commentary gives RAND researchers a platform to convey insights based on their professional expertise and often on their peer-reviewed research and analysis.