Russia's Strategy in the Black Sea: How NATO Can Up Its Game 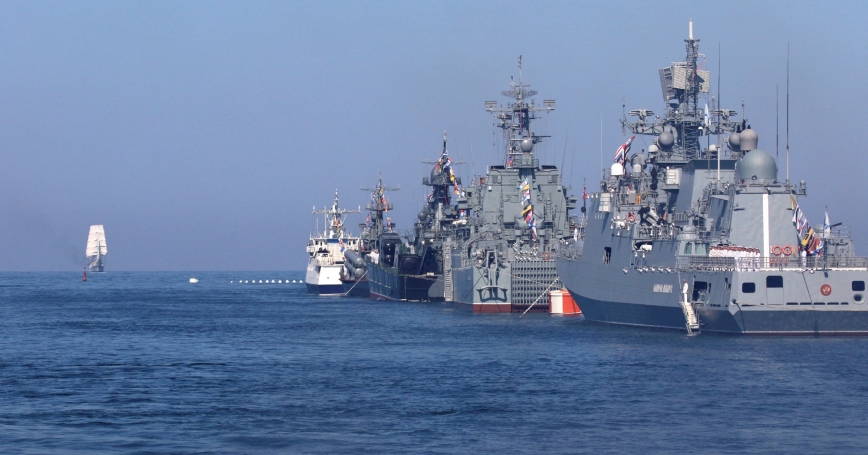 Russian warships and a sailing vessel take part in a rehearsal for the Navy Day parade in the Black Sea port of Sevastopol, Crimea, July 26, 2019

by Stephen J. Flanagan and Irina A. Chindea

The Black Sea region is a central locus of the competition between Russia and the West for the future of Europe. The region experienced two decades of simmering conflicts even before Moscow's illegal annexation of Crimea in 2014, and Russia has used military force against countries in the region four times since 2008. However, the region's security challenges have not received nearly as much attention from U.S. and European officials and analysts as northeastern Europe.

To gain a better understanding of Russian strategy and activities, the interests of NATO allies and partners, and possible elements of a Western strategy to protect those interests, RAND and the German Marshall Fund of the United States (GMF), in cooperation with the Aspen Institute of Romania, conducted a workshop in Bucharest in March 2019 with 24 experts and former officials from throughout the Black Sea region. The full proceedings of the workshop can be found here.

Participants agreed that the Black Sea region figures prominently in Russia's overarching goal to restore influence and control along its periphery. Russia is using informational, economic, energy, and clandestine instruments, tailored to conditions in each country, with goals of keeping neighbors in states of nonalignment or insecurity and open to Russian influences. Russia's occupation and militarization of Crimea, modernization of the Black Sea Fleet, and expanded forces in the Southern Military District have strengthened its ability to secure its vital southwestern flank from attack, dissuade and intimidate neighbors, and project power into the Eastern Mediterranean and the Levant. Moscow seeks to transform the Black Sea, along with the Sea of Azov, into virtual internal waterways, where Russia can have the kind of freedom of action it has achieved in the Caspian Sea. Resource constraints may limit achievement of this goal, but available and projected Russian forces are better able to advance its interests in the region.

While the Black Sea littoral countries want to protect themselves from Russian hostile interference and military intimidation, domestic political factors as well as the countries' membership in or level of association with the European Union and NATO influence the degree of overlap and divergence in their interests. Under the circumstances, it is difficult for Western countries to craft and implement a coherent, sustainable countervailing strategy.