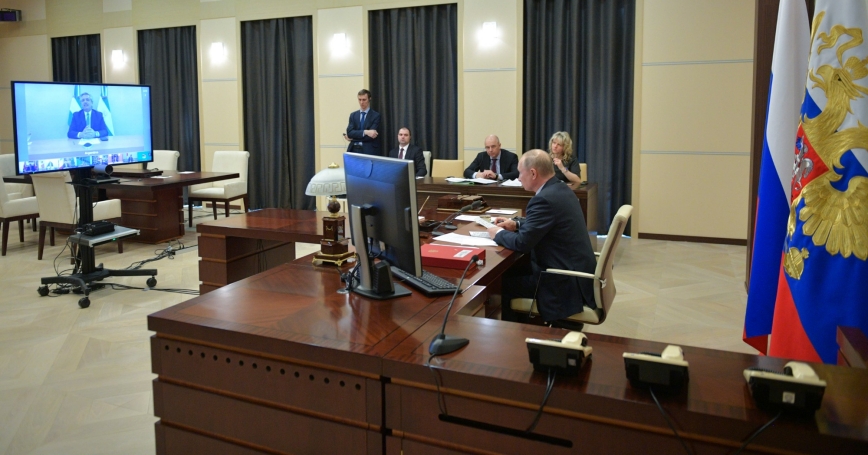 Russian President Vladimir Putin takes part in a video link, held by leaders from the Group of 20 to discuss the coronavirus pandemic and its economic impacts, at his residence outside Moscow, Russia, March 26, 2020

The G20 met in an extraordinary virtual summit March 26 to discuss the shared global challenge of COVID-19. The communiqué importantly pledged that G20 members would take necessary health measures, expand medical supplies manufacturing capacity, increase research and development funding for vaccines and medicines, and inject over $5 trillion into the global economy.

Cooperation among G20 members will prove critical to enabling the world to combat the disease and recover from the economic damage it is causing. The G20, chaired by Saudi Arabia, brings together the countries that can make a difference: China, the United States, major European countries, Russia, Australia, Brazil, Japan, South Korea, Turkey, and South Africa, among others. Communiqués will not be enough, however. Joint actions will be required.

Consistent with the communiqué provisions, here are five specific commitments and actions G20 countries could take in devising an effective response to an inherently worldwide threat. These actions could also be promoted to other countries and international organizations such as the Organisation for Economic Co-operation and Development, the United Nations, the World Health Organization (WHO), the International Monetary Fund, and the World Trade Organization.

First, G20 members could make an ironclad commitment not to impose tariffs or quantitative restrictions on imports of critical goods for fighting the pandemic, such as surgical masks, face shields, disposable gloves and gowns, ventilators, and parts and components for making such products. It was only on March 20 that the U.S. lifted its China trade war tariffs on such products. All other G20 nations could make similar commitments. Manufacturers the world over would likely invest in increased production of these critical products, in the context of a permanent trade barrier–free global market.

Cooperation among G20 members will prove critical to enabling the world to combat COVID-19 and recover from the economic damage it is causing.

Second, and just as importantly, G20 members could make a firm commitment not to impose export restrictions on such key pandemic-related commodities. Germany, South Korea, and Taiwan have restricted or banned commercial export contracts for masks and gloves, and perhaps other products. In the present circumstances, just as grain embargoes aggravate food scarcities and hunger, such export embargoes or restrictions interfere with life-saving exports. If export restrictions become accepted and common, they could lead to suboptimal distribution of such products globally, sharply increase international tension, and undermine cooperation against what is clearly a scourge that doesn't recognize boundaries.

But third, recognizing that G20 countries and others will want to take actions to make supplies of personal protective devices available to their citizens, G20 members should legitimize production-enhancing subsidies and other measures governments may wish to take to deal with shortfalls. G20 countries could agree to suspend temporarily any WTO subsidy or government procurement rules that might be counter to such emergency measures. As long as the result of the policies is to increase production and availability of life-saving products, and in the context of no import and export barriers, the global community would benefit indirectly.

Fourth, the longer-term solution for COVID-19 is to develop and deploy a vaccine to provide population immunity against the disease. Many researchers and pharmaceutical companies are working around the clock on a vaccine, and in the next year there may be one or more viable vaccines. G20 countries could anticipate such an outcome and take steps now to prevent international conflict over access to such vaccines and to maximize access to them at an affordable cost. That would mean committing now that COVID-19 vaccines, and evidence of their clinical trials and effectiveness, should be available worldwide to be manufactured under compulsory licensing terms. Companies or research centers that invest and find successful vaccine candidates should recover their costs and a reasonable return, but it is in no one's interest (including pharmaceutical companies) to see anything that can be characterized as “profiteering” from the crisis. And setting the licensing terms now could help ensure full cooperation among scientists and researchers.

Fifth and finally, G20 countries could initiate an effort to create a new, chip-enabled, and machine-readable immunization record. Many travelers now have dog-eared yellow International Certification of Vaccination cards as specified many years ago by the WHO, aimed mainly at yellow fever and smallpox. But to restart international (and maybe domestic) travel, countries will need a secure way to establish whether or not individuals have been vaccinated, or have been tested and found to have had COVID-19 (and thereby relevant antibodies). After 9/11 there have been dramatic improvements in identity documents. Work toward a COVID-19 vaccination status identity document could get underway right away.

International cooperation is easy to pledge, but these five initiatives could make a practical difference in the effort to save lives and restart economies. G20 countries could show the way for the rest of the world to cooperate on present challenges and prepare now for the public policy challenges that will be faced moving forward.

A version of this commentary originally appeared on The Wall Street Journal on March 29, 2020.