Defund the LAPD? Garcetti Budget Proposal Takes a Step in That Direction 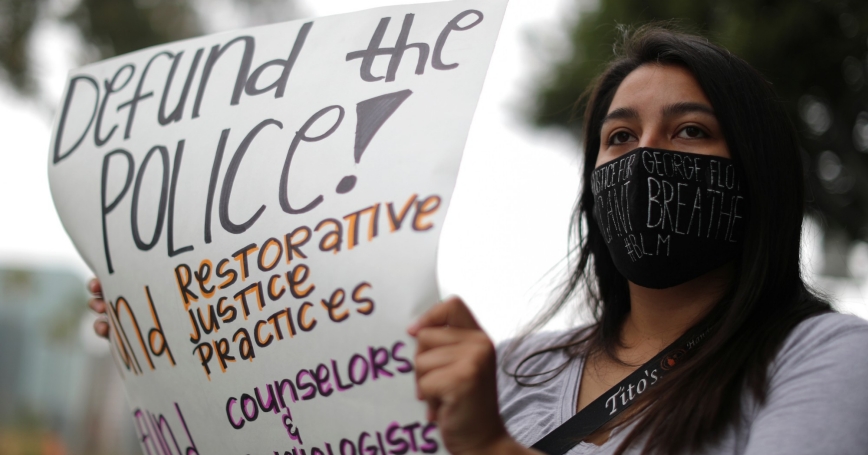 A woman holds a placard at a protest outside Los Angeles Unified School District headquarters, June 23, 2020

Research and community activists agree: Public safety can be improved by investing more public dollars in a social safety net, and less in policing and incarceration, here in Los Angeles.

Calls to “defund the police” (PDF) have grown common and urgent in the wake of police killings of George Floyd, Breonna Taylor, and numerous other Black Americans. The message is that police and other law enforcement institutions have been given extraordinary budgets and extraordinary responsibilities for solving all manner of social problems. Advocates like Angela Davis, Ruth Wilson Gilmore, and People's Budget LA have long asked Americans to imagine a future where such problems are instead addressed through care, support, and investment in communities.

The message has started to reach LA Mayor Eric Garcetti, who recently proposed (with City Council endorsement) to reallocate $150 million of the city's next budget from the LAPD to social supports, like job programs and health services, that can benefit Black people in the city. Of course, that reduction still represents a net increase from the current LAPD budget, and it doesn't address funding of jails and prisons, but it represents the type of funding change being called for.

Not only have advocates been calling for these changes—but careful analysis of the data backs them up. For example, a recent RAND study found more than half the mental health population of the LA County Jail were appropriate candidates for diversion into community-based clinical programs rather than incarceration. This shows how police, jails, and prisons have become a major “de facto” mental health treatment system in the United States. Another study (PDF) showed that Black Angelenos are overrepresented in the LA County Jail, yet on average they were just as good candidates for diversion.

Research and activists agree: Public safety in Los Angeles can be improved by investing more in a social safety net, and less in policing and incarceration.

The mayor's budget revisions may be an opportunity to begin moving beyond LA's long history of police violence and disenfranchisement to promote equal outcomes for our Black citizens. This will require consideration of two important points. First, the quality of the programs that receive reinvestment is critical. Second, this $150 million would likely not be the end of reinvestment, only the beginning.

Given these findings, Mayor Garcetti might consider partnering with the county and ODR to increase funding for effective services like the Supportive Housing program. LA County Jail has already been diverting many inmates out of custody due to concerns about spread of COVID-19, so diversion is clearly possible, and offering community-based supports is the logical next step. Yet the supports needed will certainly extend beyond a single program. For instance, in our ongoing work to evaluate ODR, we have learned how limited substance use disorder treatment is a huge problem in Los Angeles.

Which returns us to the second point: $150 million might hopefully prime the pump, but more funds will be needed. At nearly $2 billion dollars, the LAPD still represents by far the largest line item in Mayor Garcetti's proposed budget. There are many worthy departments, services, and programs in which funds could be reinvested—resulting in more healthy, productive citizens while decreasing crime.