Is North Korea Prepared to End the Korean War? 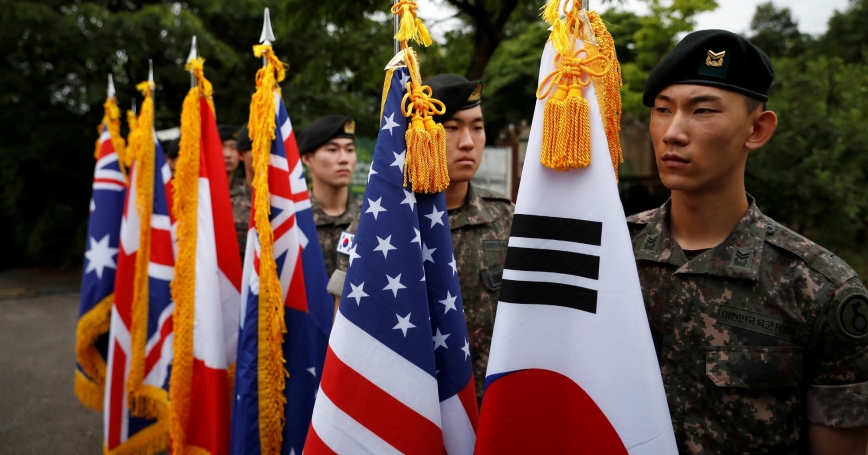 South Korean soldiers hold flags of countries that fought in the Korean War at a ceremony commemorating the 70th anniversary of the war, near the demilitarized zone separating the two Koreas, in Cheorwon, South Korea, June 25, 2020

The North Korean regime has been very clear that its two primary objectives are regime survival and Korean unification controlled by the North. The North Korean regime has reason to be worried about its survival, given its many failures in the last several years, to include the difficulties it is apparently facing in just feeding the people of Pyongyang now. The regime seems to perceive that it can overcome its third world, impoverished conditions if it can impose unification on the South, perhaps the only justification for the regime's building dozens of nuclear weapons.

But first, the North must help decouple the ROK/U.S. alliance. Without U.S. extended deterrence, the South could be vulnerable to North Korean nuclear coercion and attacks. While we seldom consider the Korean War ending with the North's original objective of victory, Kim Jong Un appears to be hoping to achieve that outcome. His insistence on the importance of unification has been a recurring theme in his New Year's addresses.

Despite Kim's dream of controlling the peninsula, a unification imposed by North Korean nuclear coercion or attack would be unlikely to really end the Korean War. Seeking dominance rather than unification, a North Korea in charge of all of Korea would probably use its hallmark brutality in purging ROK business, political, and military leaders, replacing them with North Koreans loyal to the Kim Family but so lacking in the knowledge and experience required to run South Korean business that they could instead destroy those businesses. The North's use of nuclear weapons would also probably lead to the imposition of substantial international trade sanctions, which when combined with North Korean mismanagement could gradually strangle even the ROK economy which is heavily export-oriented—a real trade war. The wealth of the South would not last long in such extreme circumstances, leaving the South Korean people impoverished as the North might expropriate their residual wealth. This is not a picture of peace.

Bruce Bennett is a senior defense analyst at the nonprofit, nonpartisan RAND Corporation and a professor at the Pardee RAND Graduate School. Soo Kim is a policy analyst at RAND.

This commentary originally appeared on The National Interest on June 29, 2020. Commentary gives RAND researchers a platform to convey insights based on their professional expertise and often on their peer-reviewed research and analysis.