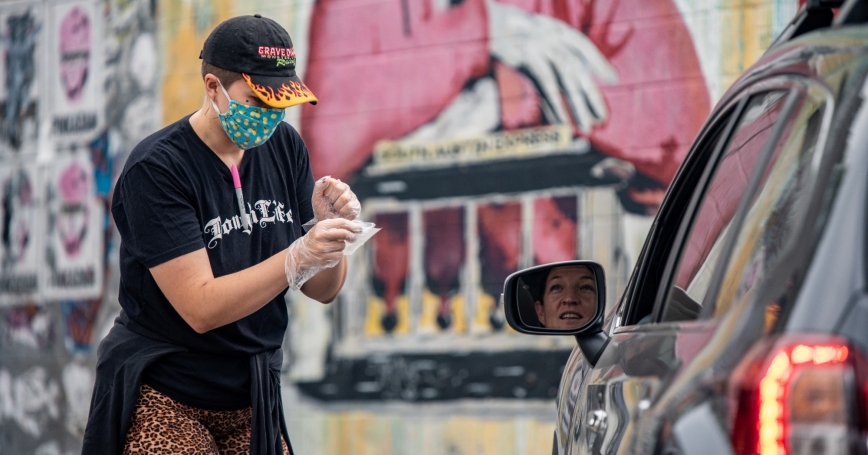 An employee of a pizza restaurant talks to a customer in Austin, Texas, June 28, 2020

Washing dishes, cleaning hotel rooms, flipping burgers, mowing lawns—not only do entry-level jobs with often no educational requirements provide income to young workers, these jobs also create opportunities for young workers to build an early, stable employment track record. This can be an important facet for career growth. Young workers construct an employment history with every job they hold and retain, as well as with every month unemployed. Favorable histories position them to move into higher-paying jobs, including in other industries.

Summer is typically a time when employment for young workers is at its highest, with an average increase of 10 percent in the number of young workers employed between the spring and the peak of summer. One of the many costs of the COVID-19 pandemic is lower employment rates, as business shutdowns (voluntary and government-mandated) and distancing requirements have decreased demand for workers. With around five million, or 25 percent, fewer employed young workers in April and May, summer may continue to see several million fewer young adults working than is typical. It is not just an issue of lost wages this summer—although that too is important—there is also the problem of the effect on their personal job history moving forward.

Even one year of disruption to their employment record can have unpredictable long-term effects (PDF) on their likelihood to be hired in the future for non-entry level jobs. In the best-case scenario, the pandemic might just delay career trajectories by several months, as future employers recognize the unique nature of the pandemic. On the other hand, unemployment rates may lead employers to seek more tenured workers than usual, as labor supplies will be fuller. Existing inequities in the labor market may also be aggravated. This makes it more likely that young workers from lower-income households will be at a disadvantage in the competition for increasingly scarce jobs this summer, compared to their peers in higher-income households. This inequity is playing out in real time. For young adults from households with annual family income at or above $25,000, the unemployment rate increased from 6.2 percent in February 2020 to 22.2 percent in May. For young adults from households with annual income below $25,000, the unemployment rate jumped from 13.9 percent in February to 34.6 percent. As restaurants, summer camps, hotels, and other businesses increase operations and hire new workers this summer, and new virtual jobs are created to substitute for in-person jobs, young workers from low-income households may continue to be less likely to be hired.

So what can be done? Young workers overall should continue to review the landscape of jobs available. Employers can think creatively about their ongoing entry-level hiring needs and how they recruit workers. To help employers who are thinking creatively about hiring, they will continue to need clear guidance from government agencies on public health in the workforce that helps to identify work in COVID-safe occupations and locations.

Additionally, while summer is already underway, it is not too late for the government to consider vigorous expansion of low-risk entry-level jobs in government, such as park clean-up and maintenance, public construction, outdoor camps, and online tutoring for young students. The government can in the process create specific reach-out programs to low—socioeconomic status communities and youth. Overall, the goal should be to avoid creating a generational lack of work experience that is concentrated on low-SES youth, which could have years of ramifications for livelihoods and economic inequality in the United States. Government and employers should be working together to increase availability and access to safe entry-level jobs during the pandemic.

Matthew Baird is an economist at the nonprofit, nonpartisan RAND Corporation, codirector of the Center for Causal Inference, and a professor at the Pardee RAND Graduate School.