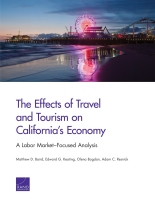 The Effects of Travel and Tourism on California's Economy

This research was undertaken within RAND Labor and Population.