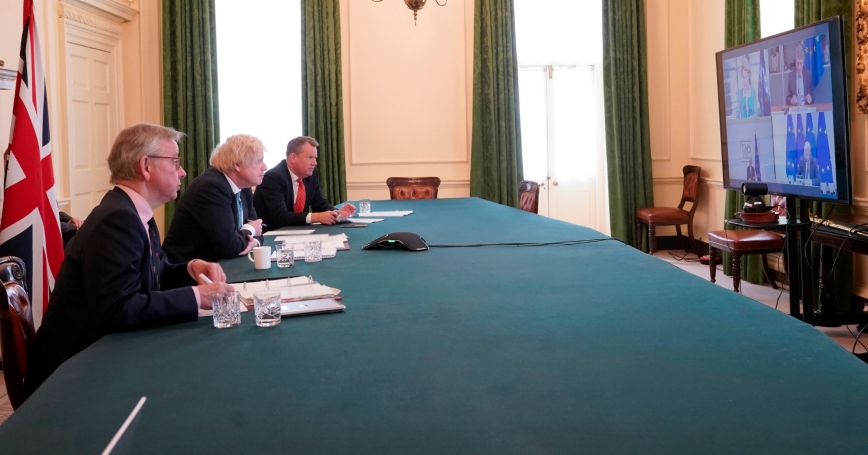 British Prime Minister Boris Johnson (center) speaks in a videoconference with the heads of the European Union in London, UK, June 15, 2020

Policymakers in the UK have been rightly focused on managing the severe COVID-19 pandemic with its tragic human costs and very significant disruption to economic life. However, in the background Brexit keeps bubbling away. Last month, the UK government ruled out an extension of the transition period that ends on December 31, 2020. Yet what may happen at the end of this year remains uncertain. Will there be a deal and if there is a deal what type of deal is likely to be in place?

Media reports suggest that negotiations are stuck, with neither the European Union (EU) nor the UK willing to make substantial concessions. The EU wants to safeguard the integrity of the single market. It is principally seeking level playing-field arrangements, concerned that the UK will undercut its environmental and labour standards and not abide by current state aid rules. It would also like access to UK coastal waters for fishing.

The UK, in the meanwhile, does not want arrangements that tie it into EU rules and regulations and seeks sovereign control of its waters. The UK government is also cautious about any arrangements that would involve monitoring by or involvement of the European Court of Justice, a concern of the 'Vote Leave' campaign.

The prize on the table is tariff-free trade in goods. This is by itself a compromise as it does not replicate the current arrangements that the UK has as a member state. For instance, it does not include trade in services—the EU accounts for the majority of the UK's services exports—and non-tariff barriers such as regulations or quotas. Both are often more substantial hurdles to trade than tariffs.

Losing EU membership would make the UK economically worse off in any likely scenario. This economic loss cannot be overcome by trading more with other parts of the world, one of the arguments used for leaving the EU.

Analysis by RAND Europe and the RAND Corporation shows that losing EU membership would make the UK economically worse off in any likely scenario. This economic loss cannot be overcome by trading more with other parts of the world, one of the arguments used for leaving the EU. So there is a price to be paid. But the question is, how steep will that price be?

In the absence of a deal by the year's end, it is likely that tariffs will be placed on EU-UK trade after the transition period with 'more' complicated border clearance procedures between the EU and the UK and also in the Irish Sea, given that Northern Ireland will remain in the Single Market as agreed in the Withdrawal Agreement. Tariffs are expensive and having a trade border in the Irish Sea raises uncomfortable questions about the union between the four nations in the United Kingdom.

A deal for tariff-free trade is clearly in the interests of both parties and despite the current stalemate, a deal is still the most likely outcome. EU negotiators have recently shown some flexibility around what they are seeking in terms of fishing access to UK waters, and the UK may be willing to accept that if it diverges from EU standards the EU could reimpose some tariffs on the products concerned. The sides may not be as far from each other as supposed.

However, the decision to make a deal could come down to the wire. The UK government's decision to rule out an extension of the transition period reduces any flexibility that negotiators may have had. It is likely that the UK wants to end a divisive period brought on by the referendum and reduce the uncertainty to business and society caused by Brexit.

By the end of 2020, UK GDP could be 0.17 percentage points less than if the UK had not voted to leave the European Union.

Reducing uncertainty makes sense. A further study by RAND shows the substantial cost of trade policy uncertainty to the UK economy. By the end of 2020, the study shows that UK GDP could be 0.17 percentage points less than if the UK had not voted to leave the EU. This may be an argument for establishing the new EU-UK relationship quickly to allow business and society to move on.

Any deal agreed by the end of the year is likely to be a basic trade agreement, however, likely requiring more years of bilateral negotiations to sort out other aspects of the relationship. At the end of the road, the UK-EU partnership may not be dissimilar to the relationship between the EU and Switzerland, which constantly evolves with new bilateral agreements (though the EU has been clear it would rather have a comprehensive deal such as it has with Norway). But it is likely that one way or another uncertainty will remain a feature of the EU-UK trading relationship for some time to come.

Our analysis—and that of others (PDF)—shows that leaving the EU has had an overall negative economic impact on the UK economy and that there are additional economic costs associated with the uncertainty surrounding the new relationship. Deal or no-deal, the UK economy is suffering from uncertainty in the short-term and may suffer from higher barriers to trade in the long-term.