Domestic Terrorism and the U.S. Elections 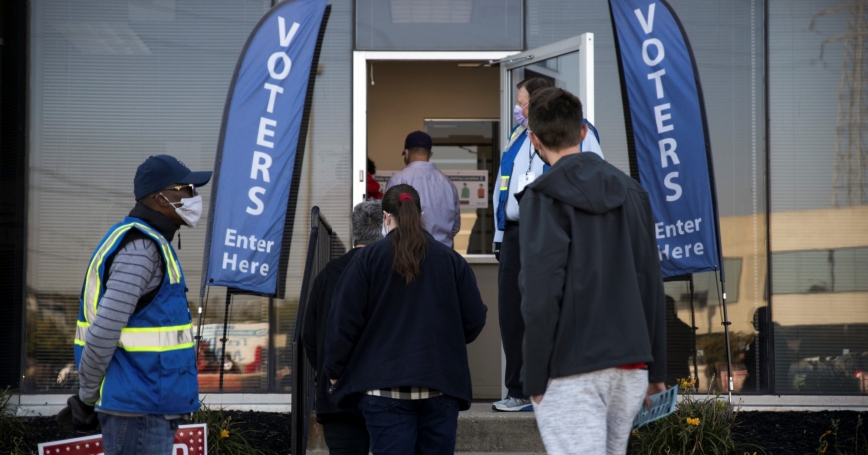 People line up to cast their ballots for the upcoming presidential election as early voting begins in Cincinnati, Ohio, October 6, 2020

The country is deeply divided. The political system is polarized. Bizarre conspiracy theories have entered mainstream political discourse. There seem to be messaging efforts designed to delegitimize next month's elections. The president refuses to say that he will abide by the results. One official talked on social media about buying ammunition and preparing for violence. Some pundits are warning of civil war. The nation's anxiety is palpable and understandable.

Older Americans have a slight advantage in avoiding alarm. They personally recall the turbulent late '60s and early '70s with the country at war abroad and at war with itself at home. It was a violent period that witnessed lynchings, church bombings, open defiance of the federal government, assassinations, riots, the unprecedented resignation of a president, political conventions under siege, and an openly segregationist political campaign aimed at throwing the election into the House of Representatives, where its proponents could determine the next president. It is curiously reassuring to recall that we have been here before—and come through it.

American institutions held then, but can they do so again now? What are the prospects for domestic terrorism in the context of U.S. elections?

The honest answer is that we don't know what will happen. However, we can examine the range of possibilities and make some educated guesses. This will not enable us to predict the future, but it may help us keep our cool.

Strife over measures to slow the spread of COVID-19 and racism in America might illustrate what kind of threats and violence we could see with the forthcoming elections.

A tranquil election is of course unlikely. There have been continuous nationwide protests over racism and police conduct since May. While most have been peaceful, there have been some violent confrontations, assaults on federal property, and looting. Extremists at both ends of the political spectrum have sought to provoke violence. Exhausted, apprehensive, and angry police have on occasion overreacted. It is hard to imagine that this turmoil will suddenly end on Election Day.

Strife over measures to slow the spread of COVID-19 and racism in America might illustrate what kind of threats and violence we could see with the forthcoming elections. These include mass protests that could sometimes involve violence, counter protests, and confrontations with police; vandalism and arson; standoffs and sieges; armed intimidation; aggravated assaults; death threats against public officials; and a number of shootings, including several deadly ambushes of police.

Early voting has already begun. Disturbances could arise from attempts to intimidate voters or interfere with the voting process. The president retweeted a message from a far-right network branding the ongoing protests against racism as part of an attempted coup. He has stated his belief that a loss in November could only come about as a result of election fraud and has warned of a “rigged election,” urging his supporters to go into the polls and watch “very carefully.” If they are thrown out, he said, it is because “bad things happen.”

His more ardent followers may infer encouragement to confront and confound his political foes, especially at polling places. Poll watchers are permitted, but state laws vary as to who is eligible, registration and identification requirements, and numbers at each polling place.

Angry protests could erupt if it appears that a significant number of voters are being denied the right to cast their ballot.

Misunderstandings could lead to angry confrontations and long lines that succeed only in complicating and slowing the electoral process. Some states worry about the visible presence of armed groups at polling places but lack laws to prohibit them. Bomb threats at polling stations are not unusual. And angry protests could erupt if it appears that a significant number of voters are being denied the right to cast their ballot.

Election Day to the Inauguration

Objectives, tactics, and targets may shift in the months between Election Day and inauguration. Some might perceive the expected delays in counting absentee and mail-in ballots as evidence of efforts to overturn results. These disputes would have to be adjudicated in the courts, ultimately by the Supreme Court. But courtrooms might not be the only battlegrounds.

We could see massive demonstrations to show political strength for their candidate and to warn authorities what could happen if they defy what demonstrators on one side or the other believe to be popular will. There could be efforts to impede the counting or recounting of ballots, perhaps even armed takeovers of facilities where ballots are being tallied or stored, arson to destroy “fraudulent ballots,” bombs and bomb threats, and threats to election officials and judges. Death threats have already been made against health officials and political leaders during the pandemic. So with political foes portraying each other as evil and dangerous, it is not difficult to imagine that there might be attempts to assassinate political leaders.

Any violence that might occur that would be associated with the elections could have a long tail. Organized terrorist campaigns could emerge, but if so, this would likely take place over a longer period of time. Following the turbulent 1960s, a number of tiny groups on the far left as well as other actors carried out bombing campaigns that lasted years. It's not impossible that the 2020s could turn out to be a turbulent decade.

At Least Initially, Political Violence Is Likely to Be Unorganized

Violent extremists represent a tiny fraction of the population, although they command disproportionate attention in the news media. Hate is an attitude that does not require central management. Online exhortation has replaced the need for clandestine recruiting. Few of the planned attacks can be attributed to an organized group.

That may be changing. Months of confrontation tends to radicalize participants. It leads to the coalescence of more violence-prone elements. It generates secret communications networks and underground organization. It attracts thugs who may displace more cautious leaders.

Spreading violence could also indicate a contagion effect rather than a campaign. Given the current environment, the media would likely tend to report any dramatic act of violence through a political lens. This could produce a contagion effect where it is not ideology or exhortation that unites the perpetrators, but imitation. One violent act could inspire another.

“Terrorism” Is a Term Best Avoided

To address such violent acts, new domestic terrorism statutes and new designations of terrorist groups are not needed and could be counterproductive. Ample criminal statutes exist. Many of those who carry out terrorist attacks are prosecuted for routine crimes—murder, aggravated assault, conspiracy.

FBI officials have emphasized that in dealing with domestic threats, they investigate individuals based upon their potential for violence, not groups. This does not mean that they do not legitimately collect intelligence on all potential sources of violent crime—it reflects caution borne of experience. Authorities have learned to tread carefully in dealing with domestic political violence. Prosecutors also generally prefer to prosecute ordinary crime, without getting into possible political motives.

New domestic terrorism statutes and new designations of terrorist groups are not needed and could be counterproductive.

America's deadliest domestic terrorist, Timothy McVeigh, who in 1995 blew up the federal building in Oklahoma City, was convicted in federal court of eight counts of murdering federal officials, a charge which carried the death penalty. McVeigh was also charged in state court with 168 counts of capital murder.

Meanwhile, decades of experience have taught American extremists the utility of “leaderless resistance”—an invention of right-wing extremists that other groups have adopted. Leaderless resistance encourages individuals or autonomous small cells to engage in acts of violence independent of any central command or support. The strategy was adopted to protect leadership and the extremist enterprise against infiltration and prosecution. Extremist communicators encouraging such actions have learned how to stay just inside the law.

Who wins the election may be less important than how obvious the victory and how soon we know it. The biggest factor may be whether the loser concedes. The balance of power in the House of Representatives and Senate will also affect attitudes. A clean sweep could end up heightening despair among the outs.

As mentioned, tactics could run the gamut, from mob violence to premeditated attacks. While bombings were the signature tactic of extremist groups in the 1970s, when the United States saw 50 to 60 terrorist bombings a year, commercial explosives have become harder to obtain, and recent domestic bombings involve more primitive homemade concoctions.

Firearms are the deadliest weapons in today's political violence. Reflecting their political views, right-wing extremists appear to be the most heavily armed, but guns are readily available to everyone. Armed politically motivated attacks tend to fall into two categories—mass shootings and assassinations.

The deadliest terrorist attacks in the United States over the past 20 years have been mass shootings, such as Fort Hood in 2009, San Bernardino in 2015, and the Orlando nightclub in 2016, all carried out by homegrown jihadi terrorists. Far-right extremists carried out the 2019 El Paso shooting and the 2015 church shooting in Charleston, S.C. In 2017, a left-wing extremist opened fire on Republican members of Congress playing baseball. According to a recent study, in this period far-right extremists carried out attacks causing 335 deaths, while those by far-left extremists caused 22 deaths.

The 1960s saw the assassinations of John F. Kennedy, Martin Luther King, Robert F. Kennedy, and Malcolm X. Gerald Ford and George Wallace were targeted by assassins in the 1970s, as was Ronald Reagan in 1981. There have been other shootings of members of Congress and judges. The motives are not always clear, and in many cases the assailants were mentally ill rather than politically motivated.

Politically motivated death threats against government officials appear to be increasing. Whether this presages an upward trend in actual assassinations we cannot say, but being a politician could become a more dangerous job.

Targets reflect ideological orientation. Far-left extremists have tended to attack symbols of “capitalist exploitation” and “oppressive” institutions. Targets of far-right extremists have tended to be racial and ethnic minorities, dark-skinned immigrants, Jews, Muslims, and those they believe promote minority interests. Some far-right extremists see the federal government itself as controlled by enemies determined to destroy them—the narrative that drove the Oklahoma City bombing.

Predictably, There Will Be Unpredictable Events

The COVID-19 pandemic has already roiled the elections, even more so now that it has infected President Trump. No one knows what will happen next. Fewer sources of information are accepted as credible across the politically polarized divide. A sinister explanation can be perceived as lying behind every development. Under these fraught circumstances, even a minor event can have far-reaching repercussions. And violence can escalate rapidly from such events, as we've seen in the Balkans in the 1990s and during the 2011 Arab Spring.

The future of the country depends more on the good sense of its people than of its political leadership. Regardless of political differences, most Americans are tired of the political pandemonium and want to get on with their lives, especially in the shadow of COVID-19 and its devastating economic consequences.

In this, today's citizens are not unlike their counterparts in the 1960s. It is heartening to think that, in the end, those Americans managed to steady the course of our nation through the hard work of democracy, not destabilize it through the easy path of violence.

Brian Michael Jenkins is a senior adviser to the president of the nonpartisan, nonprofit RAND Corporation, where he began researching terrorism in 1972.