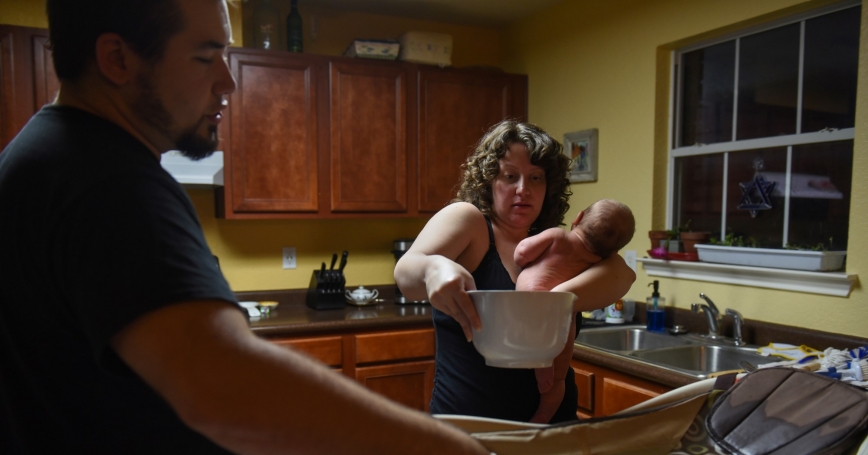 Lauren Hoffmann, who had to return to work when her son Micah was a few weeks old due to lack of paid family leave, in San Antonio, Texas, February 6, 2019

by Melanie A. Zaber and Kathryn A. Edwards

There's always a tension in families between working and caregiving. Two-parent households usually manage it by specializing. One—most often a mother—disengages from working in small ways. She works slightly fewer hours. She takes a less demanding but more flexible job. She delays seeking a promotion. Yet those tactics weren't enough in 2020: As the infrastructure that supports working parents collapsed, many stopped working altogether.

Since the COVID-19 recession started in February, almost 3 million women have left the labor force. Now, with vaccines in sight, the question is: Will they go back to work? This is an important question for the economy as a whole. Labor force participation and economic growth go hand in hand. There are several policies—none of which are in widespread use in the United States—that could help.

If policymakers are looking for ground to gain on labor force participation, paid family leave (a short period of paid time off after the birth of a child or illness of a family member) is step one. The United States is the only OECD country (PDF) that does not offer entitlement to paid leave on a national basis. (The Family and Medical Leave Act offers job protection to many workers, but not paid leave.) Caregiving poses a substantial financial strain (PDF) on families. Rather than encouraging workers to drop out, research shows that paid leave actually seems to encourage new mothers to return to the workforce.

Women are more likely to work, and work full-time, when there is affordable childcare available and nearby. Women's labor force participation is highly sensitive to commute times and day care drop-off adds minutes each way. If high-quality childcare were to be made as available as the community library, grocery store, or elementary school, policymakers could ensure that this is not a barrier, and that working parents wouldn't be forced to choose a more local but lower-quality option. As an investment in labor force participation, a network of subsidized childcare has the potential to have large effects.

As an investment in labor force participation, a network of subsidized childcare has the potential to have large effects.

Likewise, school days that end in the early afternoon have resulted in an estimated 1 million mothers of elementary school children having left the workforce (PDF) compared with those whose children are older. A longer school day, through increased instructional time or expanded aftercare options, could increase labor force participation and attachment (PDF) among mothers and decrease the gender pay gap.

Parents also need more predictability in their own work scheduling. Shifts that are erratically scheduled and changed with little notice leave parents scrambling to secure childcare, sometimes having to choose informal care arrangements (PDF) with generally lower quality. Some U.S. cities already have taken the initiative on this front with so-called “right to request” or “fair workweek” laws requiring employers to consider shift requests. Such laws currently protect close to 2 million workers.

Policies that make it easier for parents (and thus mothers) to work benefit more than just their families.

Policies that make it easier for parents (and thus mothers) to work benefit more than just their families. For employers, onsite, dependable childcare reduces employee absenteeism and increases productivity (PDF). Fair workweek laws make it more feasible to hold a job while enrolled in college (PDF). Pro-parent policies also could increase the currently declining birthrate in the United States. France, which employs three of these policies—a longer school day (PDF) for students ages 3 to 11, paid parental leave (for biological and adoptive parents), and a neighborhood childcare system (albeit oversubscribed) for those not yet school-age—has been experiencing a baby boom. In contrast, the United States has declining fertility rates and slow population growth—and a pandemic baby bust is expected to drive that down until the economy recovers, with implications for enabling long-run growth.

Once this pandemic is over, the pace and potential of economic recovery will rest on the shoulders of how many people work. This recession was unprecedented in many ways, but one of the problems it exposed—how drastically the trade-off between work and caregiving decreases labor force participation—is one that public policy has every capability of addressing.

Melanie A. Zaber is an associate economist at the nonprofit, nonpartisan RAND Corporation. Kathryn A. Edwards is an economist at RAND and a professor at the Pardee RAND Graduate School.