The Battle of Capitol Hill 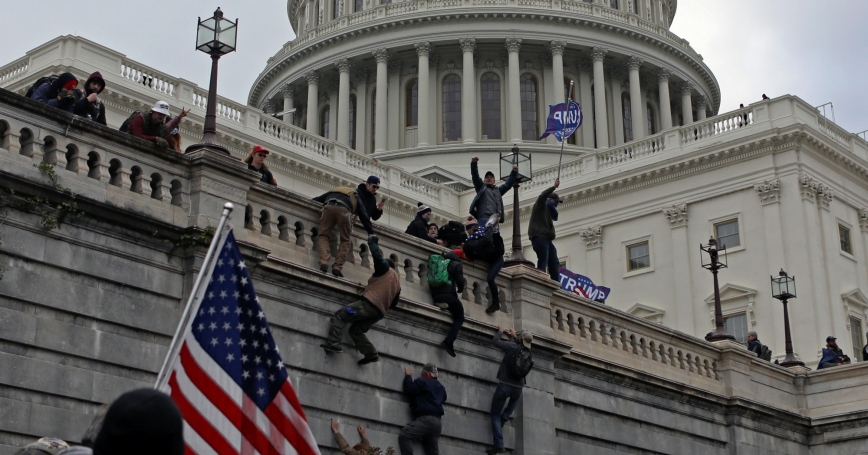 Supporters of the outgoing president, Donald Trump, climb a wall during a mob assault on the U.S. Capitol Building in Washington, D.C., January 6, 2021

What happened in Washington Wednesday—a mob assault on the Capitol while electoral votes were being officially accepted—was a predictable possibility. Democracy held, but security failed, spectacularly.

We need to be better prepared for future acts of political violence. This will not end on Inauguration Day.

Although there are disturbing reports and photos of an officer taking a selfie with members of the crowd, or standing by while inadequate security barriers were breached, the Capitol Police were clearly outnumbered. No reinforcements arrived until long after the mob poured into the building. Security and the response appeared improvised.

It could have been a massacre. For weeks, anonymous internet users have talked about smuggling guns into the District of Columbia, an observation that had been publicized in the news media. When the security barriers were breached, no one knew whether some of the attackers were carrying concealed weapons. Had even a few been armed and determined to kill, it would have turned the congressional chambers into a killing field. Instead of trashing offices, the intruders could have taken elected officials hostage; it was only in October that the FBI thwarted a plot by right-wing extremists to hold the governor of Michigan hostage.

We need to be better prepared for future acts of political violence. This will not end on Inauguration Day.

The failure of planning is incomprehensible. It is not just that Washington has been seized by massive protests all year. The Capitol has been a target many times in the past. In 1954, Puerto Rican separatists opened fire from the gallery of the House of Representatives, wounding five members of Congress. There have been several bombings. In 1998, an armed individual broke through security at the Capitol and two Capitol police were killed. The Capitol Building was the probable fourth target of the 9/11 hijackers whose plane crashed in Pennsylvania and a terrorist attack on the building has been a worry ever since.

Formalizing the constitutionally mandated electoral count was identified as the last opportunity to change the outcome of the November election. Groups with histories of violence were openly gathering in the nation's capital. No one thought the Capitol Building might be a target?

There was a thin security perimeter outside the building, but apparently no pre-established security perimeters inside, apart from a few officers. No hallways were blocked. Once inside, intruders wandered the building freely. A credenza was pushed in front of the doors into the congressional chamber while members hid behind desks.

The Capitol Police has 2,300 officers and an annual budget of $460 million. There are other federal agencies in Washington that can provide additional resources. The fact that both the FBI and the Secret Service called on their personnel to assist is more evidence of an improvised response.

January 6 is now a day to be remembered on the calendar of violent resistance to the federal government. Emerging from Wednesday's debacle are diehards whose fantasies of a stolen election are still being fueled. They could now be emboldened by their successful confrontation: They won the battle of Capitol Hill. A continuing deep sense of injury coupled with an unrealistic assessment of their own power is always a bad combination.

Defiance is not easily put back in the box. Wednesday's events may cause some previously inflammatory political leaders to sober up, but to the self-appointed patriots striding triumphantly through the Capitol hallways, any weak denunciations by such politicians may only feed their sense of betrayal and harden their resolve.

We have entered a new era. The nation could see massive demonstrations to show continued political opposition to President-elect Biden. January 20 could see a “counter-inauguration.” February's State of the Union address could also entice extremists to take action when the nation is watching.

But I worry less about mobs in Washington than I do about terrorist plots by diehards after the inauguration. Death threats have become common against health officials and political leaders during the coronavirus pandemic. A plot to kidnap a governor has been revealed and foiled. It is not difficult to imagine death threats, attempted assassinations of political leaders, and other acts of terrorism.

The 2020s could turn out to be a turbulent decade.

Brian Michael Jenkins is a senior adviser to the president of nonpartisan, nonprofit RAND Corporation, and directs the National Transportation Security Center at the Mineta Transportation Institute. He began researching terrorism for RAND in 1972.

This commentary originally appeared on The Hill on January 9, 2021. Commentary gives RAND researchers a platform to convey insights based on their professional expertise and often on their peer-reviewed research and analysis.