Equal, Rapid Access to Vaccines Is More Important Than Ever as New COVID-19 Variants Emerge 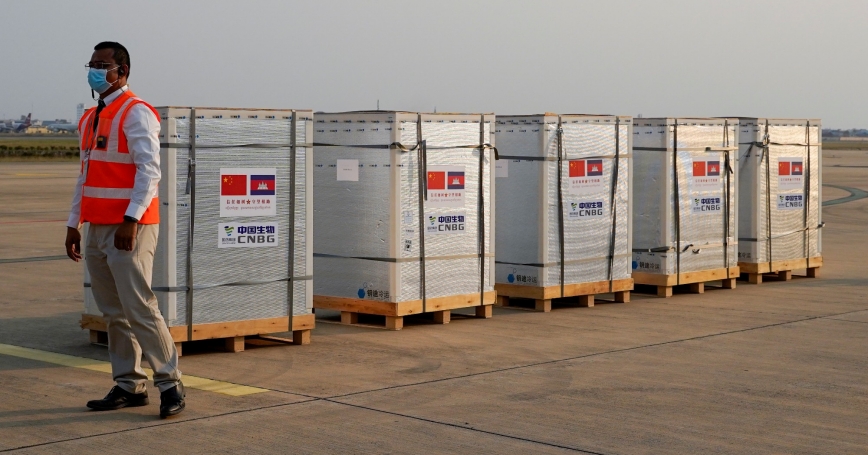 A worker stands next to the shipment of 600,000 doses COVID-19 vaccines donated by China at the Phnom Penh International Airport, in Phnom Penh, Cambodia, February 7, 2021

The approval of various COVID-19 vaccines seems like a game changer in the course of the pandemic. The vaccines offer hope that vulnerable populations can be better protected and that people's social and economic lives can perhaps return to normal, or at least closer to it.

However, the virus is not static. New variants of the SARS-CoV-2 virus are emerging frequently. Just as dangerous to human health, these variants tend to be more transmissible than the original. Variants have emerged in the UK, South Africa, South America, and North America, and recent evidence around the new Novavax vaccine suggests that it is highly effective against the British variant but less so against the South African.

If some vaccines are likely to be less effective as new variants arise, it makes the argument for the rapid and global distribution of effective vaccines even stronger. Any delays to worldwide vaccine access will only prolong the pandemic. If some countries only get access to a vaccine by 2024, as some estimates suggest, then the virus could rage in some populations and may mutate to an extent that it renders the existing vaccines less effective or, in the worst-case scenario, ineffective.

If some vaccines are likely to be less effective as new variants arise, it makes the argument for the rapid and global distribution of effective vaccines even stronger.

However, high-income governments are already stockpiling vaccines to ensure that they can vaccinate their populations now, and in the immediate future, including those people in low-risk groups. And if new or updated vaccines are required to mitigate against new variants of the virus, the stockpiling may continue.

As well as prolonging the pandemic, this 'vaccine nationalism' could lead to preventable deaths if vulnerable people in certain countries can only access vaccines after those at low risk in other countries. There is clear, moral reasoning for making effective vaccines available across the globe to ensure that those people who are most at risk are inoculated.

High-income countries could get back nearly $5 for every $1 spent on supplying vaccines to low-income nations.

In contrast, fostering the multinational cooperation and coordination required to make vaccines available across the globe could save money. A recent RAND Europe report showed an inherent economic benefit. The report argues that high-income countries could get back nearly $5 for every $1 spent on supplying vaccines to low-income nations.

Without strengthened international collaboration on this front, the pandemic is likely to be prolonged globally, tragically increasing the number of deaths and long-term ill, and reducing global economic output. The cost of this lost output is far more significant than the cost of making vaccines available globally. There may be no getting back to normal until everyone can do so.

Marco Hafner is a senior economist and Christian van Stolk is executive vice president at RAND Europe. They co-authored “COVID-19 and the cost of vaccine nationalism.”