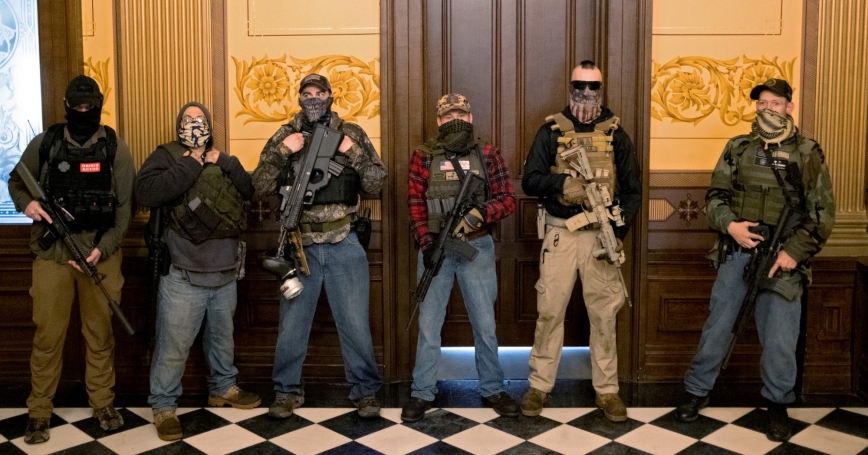 Members of a militia group who were charged in a plot to kidnap Michigan Governor Gretchen Whitmer, in the state capitol building, in Lansing, Michigan, April 30, 2020

As the Biden administration considers options to respond to the growing threat of violent domestic extremism demonstrated during the January 6 attack on the U.S. Capitol, several key issues are emerging.

Recent proposals have focused on how best to label groups like those that participated in the attack. But this does not address the underlying causes of the extremism that drove the violence. Congress has understandably been hesitant to enact a statutory framework to allow for the designation of domestic terrorist organizations or for the prosecution of domestic terrorism due to a variety of constitutional and law enforcement concerns. Although the FBI and Department of Justice (DOJ) continue to build and prosecute cases against individuals responsible for the attack on the Capitol, comprehensive solutions that could prevent further incidents have not been well developed. Unaddressed political, economic, and social grievances could leave open the possibility of similar attacks.

A national strategy might first examine existing federal and state tools for facilitating dialogue between extremist groups and authorities to foster positive outcomes before violence occurs.

A national strategy to address these obstacles might first examine existing federal and state tools for facilitating dialogue between extremist groups and authorities to foster positive outcomes before violence occurs. As part of its strategy to combat foreign terrorism, the Department of State funds a variety of international programs to counter violent extremism by providing “off-ramps” to would-be extremists.

For example, the 2021 National Defense Authorization Act “mandates that the State Department develop a strategy for countering white identity terrorism globally.” Similarly, Congress could further enhance domestic government-funded opportunities, such as the Department of Homeland Security's Targeted Violence and Terrorism Prevention Grant Program, to specifically counter white nationalism. Such programs could focus on engagement with disaffected individuals and groups, and counter political narratives advocating violence. This could provide the level of in-person interaction needed to fully understand homegrown extremism and devise effective solutions to combat it.

Additionally, and as Rep. Jackie Speier (D-Calif.) recently proposed, the United States could mandate social media checks for U.S. government security clearance applicants and holders. While this effort would be limited to reducing the risk posed by extremist individuals in gaining access to national security information, any wider government monitoring of extremist-related social media activity could raise a variety of constitutional and ethical challenges. The 1976 Church Committee found that a variety of government practices targeting domestic groups “undermined the constitutional rights of citizens.” Additionally, the Privacy Act prohibits the federal government from maintaining records describing how any individual exercises their First Amendment rights, which would include capturing social media posts.

The storming of the U.S. Capitol on January 6 may invite renewed focus on the tradeoffs between officially designating groups of U.S. citizens as domestic terrorists for law enforcement purposes and protecting the constitutional liberties of privacy and assembly that are fundamental to American society.

It is not clear that an official designation of domestic extremists as terrorists would confer additional benefits that would outweigh potential risks to U.S. civil liberties. Rather, it could exacerbate existing group tensions and grievances. Alternatively, a combined government effort that facilitates mitigation strategies to preempt violence by hate groups, while also actively stemming the flow of online disinformation, may be a good first step in reducing homegrown extremism.

David Stebbins is a senior policy analyst focusing on national security issues at the nonprofit, nonpartisan RAND Corporation. Douglas Ligor is a senior behavioral/social scientist at RAND. Formerly, he was a deputy chief of the Northeast Law Division for the United States Citizenship and Immigration Services, Department of Homeland Security.

This commentary originally appeared on The Hill on March 1, 2021. Commentary gives RAND researchers a platform to convey insights based on their professional expertise and often on their peer-reviewed research and analysis.