Sanctions Targeting Russia's Defense Sector: Will They Influence Its Behavior? 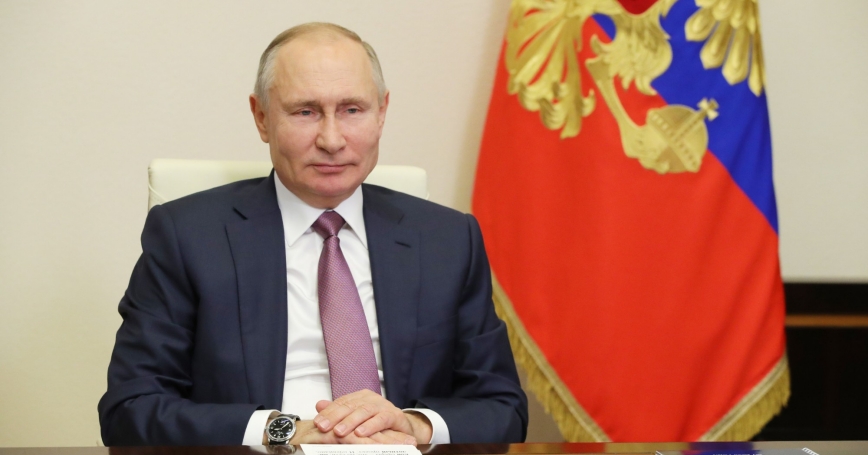 Russia's President Vladimir Putin during a videoconference meeting at the Novo-Ogaryovo residence in Moscow, Russia, December 24, 2020

In response to recent Russian cyber espionage, interference in U.S. elections, and the poisoning of opposition leader Alexei Navalny, President Biden announced a new round of sanctions and expulsions of Russian officials. The question is, will these sanctions hurt Russia's defense industry enough to curb the Kremlin's behavior?

The United States added 32 entities to the sanctioned entities list of more than 700 Russian individuals, companies, and entities already subject to sanctions. These include sanctions passed following Russia's 2014 military takeover of Crimea and aggression in Southeastern Ukraine and 2016 legislation aimed at discouraging countries from purchasing Russian advance conventional weapons through the Countering America's Adversaries Through Sanctions Act. While President Biden indicated that he did not seek an escalatory cycle of actions against Moscow, he has been much more forceful than his predecessor in calling out the Russian government for its malign interference in other states.

There are few indications that the cumulative effect of U.S. and EU sanctions, expulsions of diplomats and suspected intelligence offices, and financial restrictions are causing Putin to be more cautious. After mobilizing more than 100,000 forces at its border with Ukraine, Russia has pulled back some of the forces, though some of its equipment remains threateningly close to Ukrainian territory. Putin's participation in the Biden-sponsored climate summit and the potential summit between the two leaders in June are also signs that Putin may be tempering his approach to the new American administration. But the Kremlin leader's track record does not suggest he will back down and chart a more responsible course.

Putin's track record does not suggest he will back down and chart a more responsible course.

Ever since Russia's military aggression in Crimea and Southeastern Ukraine, Putin's regime has sought ways to mitigate Western economic pressures. The restrictions on Russia's ability to import critical system components and high-performance machine tools will, over time, have a noteworthy impact on Russia's high-technology manufacturing sector. To lessen the impact of sanctions on its manufacturing industry, Russia launched a program of import substitution in key industrial sectors, but it has struggled to achieve its intended goals. One example is Russia's continued struggle to replace key system components such as engines and composite material for aircraft wings, which Ukrainian and Western manufacturers previously supplied. This has led to development delays with both military aircraft, such as Russia's proclaimed Su-57 fifth-generation fighter and civil aircraft such as Russia's MC-21. Russian Security Council Secretary Nikolai Patrushev also acknowledged last year that the Russian defense industry “is still dependent on foreign technologies.”

Though Russia has increasingly turned to China for components, these materials have not been able to match the quality of the items that Russia previously imported from Ukraine or U.S.-aligned countries such as Germany and Japan. Over time these problems may have an impact on the quality and endurance of Russian advanced conventional weapons, which serve as Russia's only internationally recognized finished export good.

Aside from oil and gas exports, Russia's main export is its advanced conventional weaponry. But even though it is aggressively marketing, negotiating to sell, and selling weapons abroad, arms exports are not generating as much revenue as they did in the past. In a recent Stockholm International Peace Research Institute (SIPRI) report (PDF), Russia's arms exports in the last four years (2016–2020) declined by 22 percent in comparison to the previous four years (2011–2015). U.S. diplomatic interventions backed up with the prospect of sanctions have also led to a chilling effect with Russian arms sales, with a number of countries such as Indonesia and Morocco considering alternative systems to meet their security needs. Though this effort has not halted Russian arms sales, the decline in export sales raises the cost the Russian military will have to pay for its planned military modernization because the production economies of scale will not be so advantageous. Higher unit costs will create even greater financial strain on Russia's defense industry, which despite several efforts by the government to write off financial debt, continues to struggle to be profitable.

Russia has taken other measures to aid its arms sales abroad. For example, it has sought to adapt to sanctions by completing sales transactions in national currencies rather than the U.S. dollar or accepting commodities like palm oil for payment. It has also started to limit information about sales to shield currently non-sanctioned Russian companies from notice. These approaches have had limited success, but they demonstrate that Russia is not immune to international pressure. At a certain point, workarounds may become more costly than the benefits of Russian global bravado.

Three years ago, Congress passed legislation that aims to discourage countries from purchasing Russian advanced conventional weapons as yet another approach to curb Russian malign behavior. While the U.S. threat of sanctioning countries that purchase Russian weapons has caused some countries to think twice about buying Russian weapons, it has also created problems in some U.S. bilateral relations. In diplomatic engagements with other countries, the United States could emphasize how congressionally-mandated sanctions are designed to highlight Russian malign behavior in the international system and are not designed to punish third-party countries. When countries pass on purchasing Russian weaponry because of its past behavior, they reduce Russia's ability to use these transactions as a means of extending its influence around the globe and deny it funding for its malign activities.

By not purchasing Russian weapons, countries can signal to Moscow that its malign interference in the affairs of other states has a cost.

By not purchasing Russian weapons, countries can signal to Moscow that its malign interference in the affairs of other states has a cost. In lieu of Russian weaponry, countries may need alternatives to meet their security needs. There are many arms-producing nations that could provide alternatives to Russian systems. But weaponry should not be the sole alternative. Multilateral diplomatic approaches might also be considered and promoted as a means to reduce the risk of inter-state conflict. As countries continue to struggle with the health and economic damage resulting from the COVID-19 pandemic, they may need to allocate much of their national treasure to domestic needs. Advanced conventional weapons are luxury items amidst a pandemic that many national leaderships need to consider carefully.

Though it seems that sanctions directed against Russia's defense industry have had notable effects, Russia's continued behavior may not foreshadow an adjustment in its international behavior. In a variety of ways, the United States and allied partners may need to remind Putin and the oligarchs that support him that there is a cost to Russia's malign activity in the international system.

John V. Parachini is a senior international defense researcher and Ryan Bauer is a defense analyst at the nonprofit, nonpartisan RAND Corporation.

This commentary originally appeared on RealClearDefense on May 20, 2021. Commentary gives RAND researchers a platform to convey insights based on their professional expertise and often on their peer-reviewed research and analysis.