The Biden-Moon Meetings: Much Ado About Something? 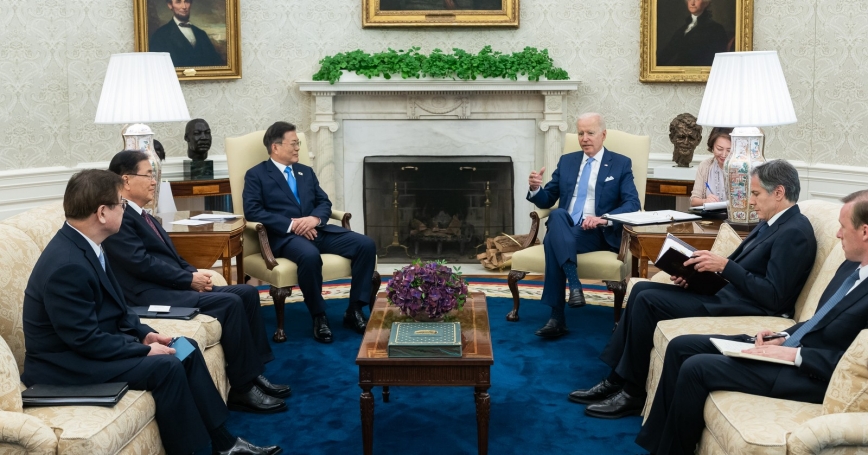 U.S. President Joe Biden meets with South Korean President Moon Jae-in in the Oval Office in the White House in Washington, D.C., May 21, 2021

The recent inaugural summit meeting between President Joe Biden and South Korean President Moon Jae-in elicited a wide range of opinion about its value. With diplomacy-first progressives in power simultaneously in both nations for the first time in two decades, even subtle gains may be significant.

Those impressed by the summit found its comprehensiveness striking and suggestive of deep coordination across multiple issues—the latter marking a sharp change from President Trump's summits with President Moon, which focused primarily on the situation in the Korean Peninsula.

The only significant issue for President Moon—moving the needle on relations with North Korea—may have been addressed with the appointment by Biden of a seasoned diplomat, Sung Kim, as his special envoy on North Korea. The summit yielded a joint statement that committed the United States to diplomacy that builds on earlier dialogues, and encouragement of continued inter-Korean dialogue—a possible win for Moon, as it will help him restart meetings with North Korean President Kim Jong-un. In addition, the United States agreed to terminate the missile guidelines that earlier gave it a significant measure of control over South Korea's missile capability. There was also agreement to transfer wartime operational control to the ROK army based on meeting conditions—although this was no different from the status quo.

The summit yielded a joint statement that committed the United States to diplomacy that builds on earlier dialogues, and encouragement of continued inter-Korean dialogue.

The gains for the United States were more subtle. Biden's primary task is to restore the credibility of American foreign policy that he believes was damaged by Trump's unilateralism. By making real, though low-cost, concessions to the ROK, he showed his belief in bilateralism. At the same time, he did not make any statement regarding relaxing sanctions on North Korea, which would have been a more significant accommodation to Moon's interests.

Why, then, are there so many skeptics? Some criticisms are aimed at a perhaps unduly soft approach to the DPRK. While the Moon-Trump summit's joint statement stated that “the two leaders expressed deep concern about the well-being of the DPRK's people, particularly in light of the egregious human rights violations and abuses committed against them by the government,” the Biden-Moon statement is milder, only stating that “we agree to work together to improve the human rights situation in the DPRK and commit to continue facilitating the provision of humanitarian aid to the neediest North Koreans.”

The Biden-Moon joint statement also arguably includes issues that do not appear to be central to the relations between the two countries—quite unlike the Moon-Trump communiqué that was sharply focused on what mattered at the time. For example, echoing the joint statement of the Quad leaders two months earlier, the Biden-Moon joint statement states, in the context of the Indo-Pacific, “the United States and the ROK reaffirm support for ASEAN (the Association of Southeast Asian Nations) centrality and the ASEAN-led regional architecture.” ASEAN has not put itself forward as a champion of the U.S. vision of the Indo-Pacific (which envisages competition with China), but has instead insisted that its Indo-Pacific outlook is based on “dialogue and cooperation, instead of rivalry.”

Similarly, the joint statement proposes cooperation on vaccines between the two countries to support world supply based on American know-how and Korean production capacity (again, this echoed the Quad meeting, but with India as the designated provider of production capacity). However, this seems destined to be as much a non-starter here as for the Quad, given Korea's substantial failure (just like India's) to meet even its domestic vaccination needs.

But perhaps one can overlook these apparent weaknesses in the cause of a greater gain: the joint statement clearly establishes the primacy of diplomacy over confrontation. In recent years, the relationship between the United States and South Korea has been dominated by defense issues. This was driven not just by the situation in North Korea but also by America and South Korea's preferred response. This led to the repeated failure of diplomatic initiatives such as the Six Party Talks of 2003–2008. It resulted in the increased and dangerous militarization of the situation in the Korean Peninsula. The Biden-Moon summit may have lent hope to the cause of diplomacy.

Rafiq Dossani is a senior economist at the nonprofit, nonpartisan RAND Corporation and director of the RAND Center for Asia Pacific Policy. He is the author of “Engagement with North Korea.”