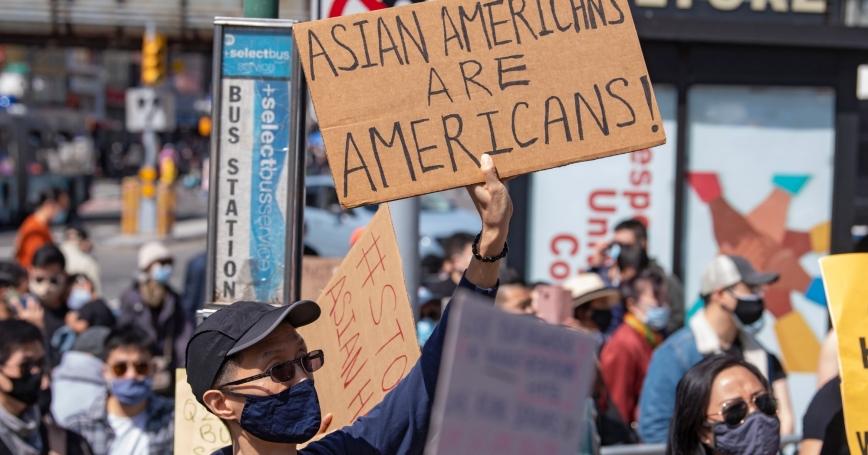 A man takes part in a National Day of Action rally in the neighborhood of Flushing in New York City, March 27, 2021

Jennifer Bouey had a warning for the members of Congress sitting in front of her. It was March 2020. Schools were closing, streets were emptying, and she was testifying about what the nation could expect from COVID-19. It wouldn't just be an epidemic of disease, she predicted. An epidemic of discrimination would soon follow.

It has. Anti-Asian hate crimes increased by nearly 150 percent (PDF) in major American cities in 2020, goaded by political rhetoric that sought to focus the coronavirus conversation on China. One anti-hate group counted nearly 4,000 incidents targeting people of Asian descent in the year following Bouey's warning. A survey in April found that one-third of Asian adults in America fear being threatened or physically attacked.

Bouey is a senior policy researcher at RAND and holds the Tang Chair in China Policy Studies. She teamed up with associate behavioral and social scientist Lu Dong to examine how Asian American and Pacific Islander (AAPI) communities are responding to the surge in hate, and how research can help.

As part of a series of conversations about ongoing projects in RAND's growing portfolio of high-quality research on racial equity policy, Bouey and Dong discussed with RAND president and CEO Michael D. Rich the rise in anti-Asian hate, the need for better data and information, and the importance of listening to Asian American communities.

Michael D. Rich: What made you want to pursue this research?

Lu Dong: The Atlanta shootings that left eight people dead, six of them Asian women, brought a national spotlight to this issue of anti-Asian hate in March 2021. But for many people in Asian American communities, it wasn't a surprise. We knew anti-Asian attacks had been escalating during the pandemic, but also that there were long-standing problems with hate and discrimination, and that the pandemic was just a trigger.

We need better data, because otherwise AAPI communities get grouped together, and specific subgroups get missed.

Jennifer Bouey: I've lived in this country for more than 25 years and have witnessed waves of anti-Asian sentiment. This time, the discrimination against Asians feels very different, just the intensity of it. We all have heard about friends or family members, if not ourselves, being under attack. Anti-Asian racism has deep roots, but many of those systemic issues have not been well studied. It's unfortunate that COVID-19 and the recent tensions between the United States and China have brought this racism to the surface, but we also see this as a triggering event to review some of those systemic issues and see how policy can address them.

Rich: What questions do you hope to answer?

Dong: Asian Americans and Pacific Islanders are the fastest-growing group of immigrants in the United States, and there is so little data, so little understanding of the heterogeneity of those communities. All AAPI communities tend to get grouped together as one monolith, and that makes it hard to understand how specific groups are affected. Our idea was to listen to these communities, to start establishing relationships and ask them what data would be helpful for them.

Our focus is on how these groups are countering anti-Asian racism, but the questions we're asking are more general. We're interested in data that could track the health and well-being, economic condition, and vulnerabilities of specific AAPI communities. For example, Filipino Americans have a very high mortality rate for COVID-19—why is that? We need better data, because otherwise AAPI communities get grouped together, and specific subgroups get missed.

Rich: What's unique about RAND's approach to this issue?

Bouey: On our team alone, we have an epidemiologist, two psychologists, and a physician scientist. That kind of multi-discipline collaboration is very much needed in this type of research, and it's such a routine for RAND.

On our team, we have an epidemiologist, two psychologists, and a physician scientist. That kind of multi-discipline collaboration is very much needed in this type of research.

But RAND also is unique as a research institute because of its willingness to support timely and underfunded projects like this. The traditional funding sources for health and social well-being research are often very behind, and there's been surprisingly little applied to AAPI communities. RAND's philanthropic funding allows us to step forward and say, What are the real questions we want to answer? As you know well, Michael, philanthropic funding is what enabled you to launch investigations into gun policy and the phenomenon of “Truth Decay” in American public life, areas where there's historically been little grant funding to support original research. I see this as one of those same bright moments.

Rich: What does success look like for this project?

Bouey: Success would be learning from these communities, having them trust us, so we can have a fruitful partnership and do good research that impacts policy. This is really an area that RAND can build more capacity in—and should, given how fast AAPI communities are growing. This is the right time, and the right thing for RAND to do.

Dong: We would love this to be the first step toward establishing relationships with community partners and launching research programs in collaboration with them. Immigrant communities, especially, often have no voice at the national level. They're invisible, and that plays into the “model minority” myth, that Asian Americans just do their work and don't complain. One way to tackle that is with research that can empower people by providing them with the best possible evidence. RAND has the experience to inform policy at the national level. Through this kind of community-based participatory research, it can help communities build capacity and develop evidence they can use, too.