China and Pakistan See Eye to Eye on the Taliban—Almost 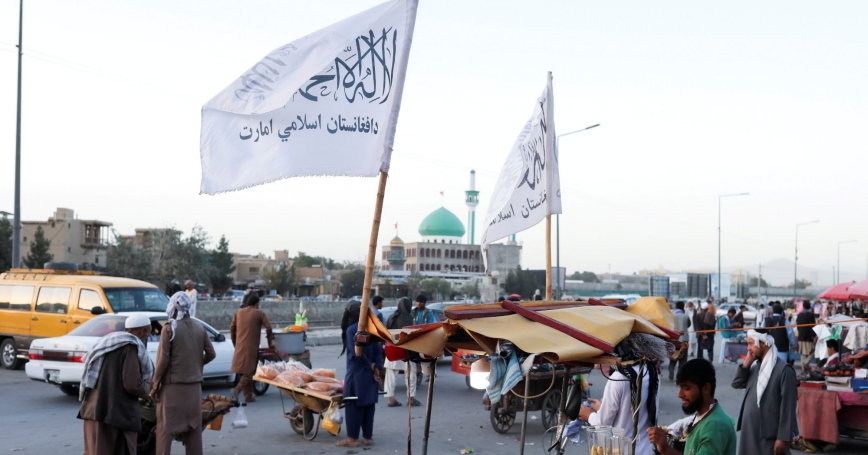 Taliban flags are seen on a street in Kabul, Afghanistan, September 16, 2021

As the dust settles on the Taliban's reconquest of Afghanistan, regional neighbors are adjusting their policies to take the new geostrategic reality into account. Among these countries are the self-proclaimed “iron brothers”—China and Pakistan. The good news for Beijing and Islamabad is that their respective policies on Taliban-run Afghanistan broadly align. But one particularly touchy and important area of policy—countering security threats from terrorists, separatists, and those labeled as such, especially by China—could become a notable sore point in an otherwise close Chinese-Pakistani relationship. In fact, if the Taliban abandon their much-repeated promise not to allow Afghanistan to serve as a platform for international terrorism once again, China and Pakistan's decades-long “all-weather partnership” will be tested more than at any time in its history. And it seems entirely plausible that the Taliban will change their mind on terrorism—or turn out unable to control it.

China and Pakistan have both welcomed the Taliban back to power. They will have a friendly partner in Afghanistan who can complicate decisionmaking for India, a mutual adversary. Since last summer, China and India have been engaged in a military standoff over their disputed border in the Himalayas. Trust between Beijing and New Delhi is virtually nonexistent, and the last thing India needs is another front to worry about. The U.S.-supported former Afghan government was a good friend of India, whereas the Pakistan-supported Taliban—especially if they align with China as well—are likely to become India's adversaries or even bitter enemies.

A friendly China-Afghanistan relationship will also have significant implications for India's economic and security interests in Central Asia. In this region, China already dominates economically and is gradually replacing Russia—a long-standing Indian partner—militarily there as well. Around 2016, Beijing unofficially established a base in Tajikistan, a neighbor of Afghanistan that has been a key security partner for India. China's presence in Tajikistan is designed to conduct its version of counterterrorism activities, i.e., preventing ethnic Uyghurs organized in the East Turkistan Islamic Movement from destabilizing China's Xinjiang region from across the border. In addition, through the multilateral Shanghai Cooperation Organization (SCO), coled by China and Russia, Beijing has increasingly solidified its security ties with Central Asian countries to New Delhi's detriment. At last week's SCO summit, Chinese President Xi Jinping urged the other members to guide Afghanistan, an observer in the group, to a smooth political transition. Pakistan, another member, argued that Afghanistan cannot be “controlled from outside”—in a clear shot not only at the United States but also India, which Islamabad believed was too close to the former Afghan government. It will be interesting to see if Beijing eventually lobbies to elevate Taliban-ruled Afghanistan to full membership. Although India has joined the SCO as well, China clearly has the inside track on engaging with Central Asian nations, and this gap is set to only widen.

Countering security threats from terrorists, separatists, and those labeled as such could become a notable sore point in an otherwise close Chinese-Pakistani relationship.

For Pakistan, the Taliban's return to Afghanistan offers strategic depth against India. Islamabad's Islamist extremist and terrorist proxies—including not only the Taliban but also the Haqqani network, Jaish-e-Mohammed, Lashkar-e-Taiba, and other groups—are likely to expand and bolster their capabilities in Afghanistan and potentially launch attacks outside the country. To be sure, a senior Haqqani official working with the Taliban has offered “positive” relations with India. However, the Taliban have also expressed their intent to “raise [their] voice” to support Muslims in India's Jammu and Kashmir region, parts of which are claimed by Pakistan. Meanwhile, Lashkar-e-Taiba has conducted horrendous terrorist attacks against India, including the 2008 coordinated assault and bombings of historic locations across Mumbai and the 2019 attack on Indian troops at Pulwama in Jammu and Kashmir. Following the fall of Kabul last month, Jaish-e-Mohammed representatives reportedly met with the Taliban to solicit their assistance for operations in Jammu and Kashmir. Even if terrorist forces do not coalesce against India in Afghanistan, New Delhi would still, at minimum, face a less-than-cooperative and probably hostile new government under the Taliban that is aligned and supported by its archrival Pakistan.

A second area of policy alignment between China and Pakistan is on enhancing infrastructure and economic connections between each other and Afghanistan. Beijing's massive infrastructure and investment program, the Belt and Road Initiative (BRI), has as its flagship project the China-Pakistan Economic Corridor (CPEC)—a combination of road, highway, rail, and energy projects in Pakistan. Prior to the Taliban takeover, the rumor was that Beijing sought to leverage BRI in Afghanistan to connect Kabul to Peshawar in northwestern Pakistan. Of course, Beijing's plans for Afghanistan are much more expansive than simply enhancing connectivity. Ideally, if the security situation eventually allows, Beijing would like to extract natural resources from Afghanistan, particularly rare-earth elements and other minerals locked within the country's mountains, which could be worth nearly $1 trillion, according to a 2014 report. In early September, Beijing provided an initial $31 million in economic assistance as a down payment of sorts to the group.

Islamabad, meanwhile, was thrilled that the Taliban this month noted their desire to join the Chinese-Pakistani corridor. Pakistani Interior Minister Sheikh Rashid Ahmed said in response that the Taliban statement was “encouraging” and “good.” He underscored that “Pakistan is proud of its friendship with China, and if the Taliban hold similar views, then it is really good.” During the third round of China-Pakistan strategic dialogue on July 24, both sides agreed to “develop and extend the CPEC” and “promote regional connectivity,” suggesting that China and Pakistan share high hopes for the corridor's expansion.

China and Pakistan certainly share much in common on Afghanistan policy. However, one major potential trouble spot is on counterterrorism. Pakistan wants to remain friendly with the Taliban, which it has supported for decades, in order to have a faithful proxy across its border. Another reason Islamabad might be reluctant to anger the group is that its Pakistani counterpart (and probable ally), Tehrik-i-Taliban Pakistan (TTP), is an internal security threat for Pakistan. Indeed, TTP attacks in Pakistan have surged since the Afghan Taliban's victory. Perhaps in a sign of things to come, Islamabad in July was initially reluctant to blame terrorism for a suicide attack on buses carrying Chinese workers to BRI projects.

In other words, Islamabad's selective pursuit of some terrorists and their enablers and not others may misalign with Beijing's relentless pursuit of all terrorists who seek to harm Chinese economic interests in Pakistan and separatists who could destabilize Xinjiang. Beijing is particularly concerned that the East Turkistan Islamic Movement could potentially receive endorsement and support from the Taliban and other Islamist extremist groups. In its most recent signal on the issue through state-run media, Beijing indicated that the Taliban would have to commit to no training, no fundraising, and no recruitment centers for terrorists within Afghanistan—where the definition of “terrorist” will no doubt be Beijing's. Beijing welcomed the Taliban's earlier statement that while it would promote Muslim rights around the world, it would also not “interfere in China's internal affairs.”

Beijing and Islamabad share a long history of cooperation and clearly have much in common on Afghanistan. Both are poised to benefit strategically from the Taliban's success.

But a breach of this pledge, a continued uptick in TTP attacks on Chinese interests in Pakistan, or additional assistance to groups in Xinjiang would likely result in China significantly turning up the heat on Pakistan to use its leverage on the Taliban to manage the problem. Indeed, at the last strategic dialogue between the nations, both sides agreed “to build a strengthened version of counterterrorism and security cooperation framework.” Depending on an evaluation of its own national security interests at the time, however, Islamabad may not be inclined to support every Chinese counterterrorism request.

Beijing is also concerned that the Taliban will continue to turn to illicit narcotics trafficking in the region, which they used as a source of financing the first time they ruled and when they were an insurgency. This time around, it is unclear whether Islamabad and Beijing will differ on this issue. Beijing could unilaterally make narcotics dealing less relevant to the Taliban by financing them. Beijing's $31 million in economic assistance to the Taliban is probably aimed in part at achieving this objective. A Pakistani decision not to back Chinese counternarcotics efforts would strain bilateral ties.

Beijing and Islamabad share a long history of cooperation and clearly have much in common on Afghanistan. Both are poised to benefit strategically from the Taliban's success. Any emerging tensions on the counterterrorism question are likely to be managed as China and Pakistan prioritize their relationship, not least for geostrategic regions related to India, their common foe. But the Taliban's resurrection almost certainly will add some stress to an otherwise positive and productive bilateral partnership.

This commentary originally appeared on Foreign Policy on September 20, 2021. Commentary gives RAND researchers a platform to convey insights based on their professional expertise and often on their peer-reviewed research and analysis.