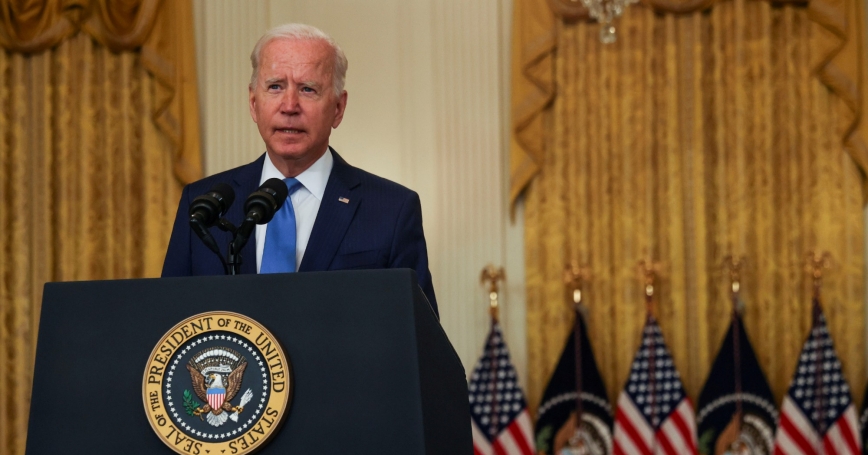 After the messy withdrawal from Afghanistan, President Biden may be ready to turn his attention to a more uplifting event on his calendar: a “summit for democracy.” But drawing up any guest lists can be fraught, especially when it's the leader of the free world deciding who makes the cut.

Among post-Soviet states, Biden is likely to show off democracy's best side by inviting the thriving Baltic countries. But he might also invite four mid-tier countries: Armenia, Georgia, Moldova, and Ukraine—imperfect democracies all. By both praising and nudging this latter set, Biden could give his agenda more meaning.

In announcing the virtual summit to be held December 9–10, Biden talked about a need to demonstrate that democracies “can deliver by improving the lives of their own people and addressing the greatest problems facing the wider world.” In that sentence, he implied the two main criteria for invitees.

The first implies higher levels of democratic and economic development.

In this area the Baltics—Estonia, Latvia and Lithuania—are best-in-class among post-Soviet states. They are ranked as “free” by the influential American nonprofit Freedom House, which annually measures 25 indicators of political rights and civil liberties for every nation. All three are members of the European Union and NATO. In 2020, their average GDP per capita by purchasing power parity was $36,386, about the same as Spain and higher than for Central Europe.

The four mid-tier states have made progress, but still face obstacles. Freedom House ranks the mid-tiers as “partially free,” and their average per capita GDP is $13,552.

Biden's second criterion highlights the importance of helping to meet transnational challenges in such areas as climate change, public health, corruption, and security.

In the socioeconomic domain, the Baltics do better in two of three areas. COVID-19 vaccination rates in the Baltics average 42 percent, versus 7 percent in the mid-tier. Transparency International's Corruption Perceptions Index shows the Baltics to be good performers, with an average rank of 31 from the top. Less so for the mid-tier. Armenia and Georgia average 53, but Moldova and Ukraine much lower with an average of 116. In per capita carbon emissions the Baltics fare less well. Estonia is an outlier at 17.0 tons, while Latvia and Lithuania average 4.4 tons; the mid-tiers, with their weaker economies, average only 2.74 tons.

In the security domain also, the Baltics are stronger. Despite Russian intimidation, they preserve their territorial integrity. As members of NATO, they contribute to and benefit from its security posture. The mid-tiers face graver challenges. Russian troops occupy parts of Georgia, Moldova, and Ukraine. Armenia, however, prefers a Russian military presence. Russian peacekeepers have been brought in to stabilize the Armenia-Azerbaijan border after a war last year.

“Not free” rankings by Freedom House could rule out summit invitations for Azerbaijan, Belarus, Russia, and the Central Asian countries.

The biggest stumbling block to summit invitations for mid-tiers could be uneven progress in democracy-building.

The biggest stumbling block to summit invitations for mid-tiers could be uneven progress in democracy-building.

Recently Georgia has fallen back. The OSCE (PDF) says parliamentary elections last October were “competitive” but lamented “pervasive allegations of pressure on voters.” On July 31, the United States said it was “deeply disturbed” by the Georgian Dream-led government's withdrawal from a compromise political accord brokered by the European Union.

Ukrainian civil society (PDF) is healthy and democracy is holding its own. But the country's progress is impeded by rampant corruption, aborted reforms, and Russia's simmering war in the east.

Armenia was making democratic gains, but last summer's war with Azerbaijan has slowed them. Prime Minister Nikol Pashinyan was recently reelected by a surprise margin despite presiding over the military debacle. His government depends even more on Russia to balance against better-armed Azerbaijan and its powerful ally Turkey, whose military aid was a major factor in the outcome of the border war.

Moldova has suffered from years of teetering between pro-Western and pro-Russian rule. It now has a pro-democratic and Europe-oriented president, Maia Sandu, and a supportive parliament. Russia seems somewhat uneasy but might work with the new government if its security interests are not threatened.

These considerations suggest that Biden might not find it easy to draw performance distinctions between the mid-tiers. He might best invite all four. This may not have notable downsides, and he could show that the United States values countries that are struggling as they improve. Not inviting the mid-tier states could cause them angst and send an unhelpful signal to Moscow.

Invitations to the mid-tiers might be coupled with cautions that the United States and the West expect continued progress in return for their support. Even as we in the United States will do well to recognize our shortcomings, we can nudge post-Soviet states to do more to achieve their democratic potential.

This commentary originally appeared on The Hill on September 19, 2021. Commentary gives RAND researchers a platform to convey insights based on their professional expertise and often on their peer-reviewed research and analysis.