Is the Fight for $15 Going to Cost Low-Wage Workers Their Health Insurance? 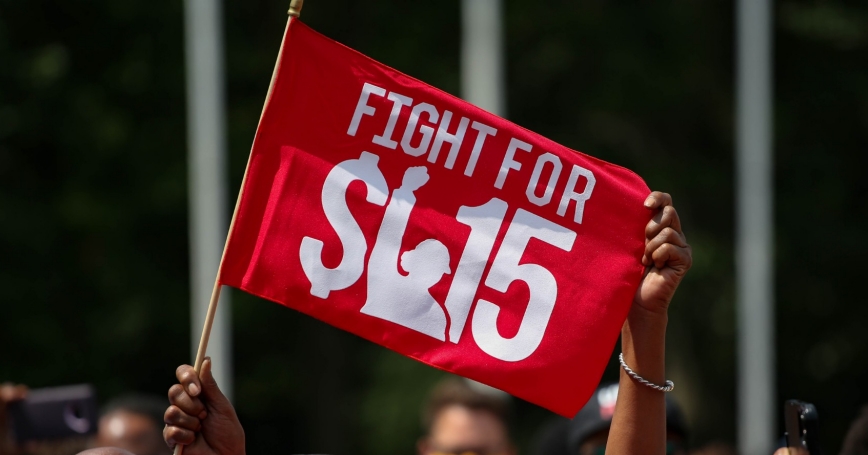 If you're a low-wage worker, of course you want the government to mandate a raise in your wage. Who doesn't want more money for putting in the same hours on the job? But there's a reason the minimum wage campaign “fight for $15” isn't a “fight for $50.” Workers understand that if a raise is too big or sudden, there can be consequences: layoffs, reduced hours, or finding your job replaced by a robot.

Losing health insurance benefits is another potential fallout. In a new paper, we analyzed state and federal minimum wage changes occurring over more than a decade. We found that, for every $1 increase in the minimum wage, low-wage workers and their families became 1 percentage point less likely to have job-based insurance coverage.

This push-pull of wages and insurance could have big implications in the years ahead. Nearly half of states hiked their minimum wage in 2021. Many are on a multi-year track of increases as envisioned by the “fight for $15” campaign. Some states have indexed the minimum wage to the cost of living. Others, including California, Florida, Massachusetts, and Illinois, are phasing in yearly raises to get to $15 an hour.

The ripple effects of raising the minimum wage are still a puzzle despite years of study. The most dire consequences—widespread layoffs and business closures—don't often materialize. Rigorous recent estimates point toward employment effects near zero. When payroll costs increase, however, businesses have many options short of layoffs or shutting down. One is to trim employee benefits. As any business owner knows, health insurance is the most costly (PDF) of these. In private industry, it accounts for over 8 percent of an average worker's total compensation, so it's an attractive target for cost-cutting.

For every $1 increase in the minimum wage, low-wage workers and their families became 1 percentage point less likely to have job-based insurance coverage.

To see if that was what was happening, we used data from the Census Bureau's Current Population Survey to study every state or federal minimum wage increase from 2004 to 2015 and its effect on who had what kind of insurance. Specifically, we looked at workers under age 65 with incomes below 300 percent of the poverty line ($40,394 for an individual in 2020) and their dependents, also under age 65. This gave us a sample of roughly 750,000 people nationwide over 12 years. We also took into account different state Medicaid policies and changes produced by the Affordable Care Act (ACA).

Here's an illustration of what our estimates mean. In 2015, 23 states and the District of Columbia raised their minimum wage. Some raises were tiny: $0.12 in Florida, $0.13 in New Jersey, $0.15 in Missouri. Others were large: $1 in Massachusetts, Minnesota, Alaska, Maryland, Rhode Island, and Washington, D.C. Our estimates imply that those minimum wage increases cost 102,000 people—out of 31.5 million low-income workers and dependents in those states—job-based health insurance.

Our findings are quite different than those in earlier research, which often reported (PDF) no impact of minimum wage on insurance, or only among a limited set of employers. We think there are three explanations for the change. First, our study covered a period with many state and federal minimum wage increases, which could have made it easier to detect an impact on health insurance. Second, health care costs (PDF) have risen substantially for private industry, from $1.53 per hour in 2004 to $2.60 per hour in 2019. That means reducing insurance benefits has a bigger payoff to employers. Third, the Affordable Care Act may have made job-based insurance less valuable to low-wage workers if they gained access to Medicaid or ACA subsidies. That dynamic could make it easier for firms to cut back coverage without risking an exodus of employees.

Finally, unlike previous studies, we considered insured dependents in addition to low-wage workers. That turned out to be important. It accounted for slightly more than half of the effect that we found.

It may be surprising to some that workers earning at or near the minimum wage get job-based health insurance, let alone coverage for their families. However, low-wage workers today aren't just teenagers in their first jobs. Many are caring for children and may be the sole breadwinner. Our data showed that nearly half (47 percent) of the 87 million individuals in low-income working families had employer coverage, either in their own name (22 percent) or as a dependent (25 percent).

Here's another interesting thing: Even though some people lost job-based insurance when minimum wages went up, they didn't necessarily become uninsured. In fact, our results suggest that coverage losses were offset by higher Medicaid enrollment. This finding was less robust than our main result, but the relationship between minimum wages and enrollment in public insurance programs warrants closer examination.

If policymakers want to raise the minimum wage, they need to consider whether workers have alternative sources of insurance coverage.

The critical implication, to us, is that if policymakers want to raise the minimum wage, they need to consider whether workers have alternative sources of insurance coverage. At the federal level, that might mean extending the ACA subsidies that were temporarily enhanced under the American Rescue Plan. At the state level, this might mean expanding Medicaid eligibility, especially in states that didn't do so under the Affordable Care Act.

Our study is also part of a growing body of research exploring the minimum wage's less-expected ramifications. Other scholars have linked increases to better infant health, improved mental health, and reduced suicide rates. All this should remind policymakers to look beyond standard labor market outcomes and take into account other effects of this important policy—whether for good or for ill.

This commentary originally appeared on Newsweek on October 11, 2021. Commentary gives RAND researchers a platform to convey insights based on their professional expertise and often on their peer-reviewed research and analysis.