The Great Resignation: American Workers Suffering a Crisis of Meaning 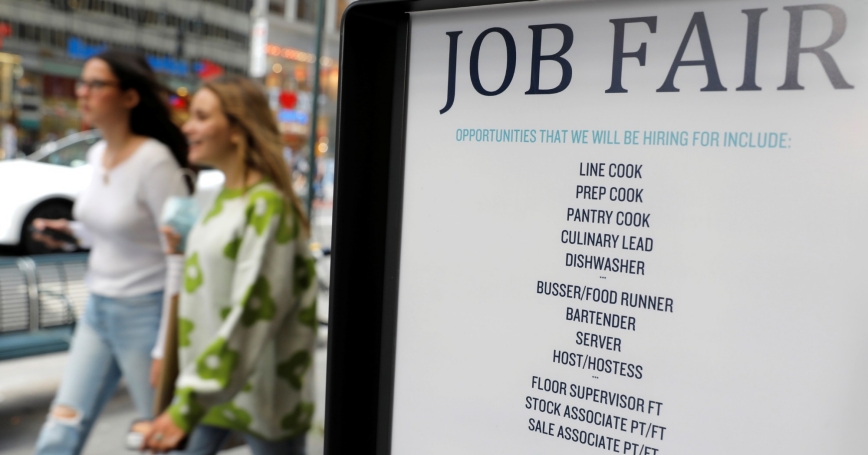 Signage for a job fair is seen on 5th Avenue after the release of the jobs report in New York City, September 3, 2021

Americans are quitting their jobs in record numbers. This phenomenon has been dubbed the Great Resignation and created significant shortages of workers for businesses. To understand and address this issue, attention might need to be paid to noneconomic factors in addition to economic ones.

There are more U.S. job openings available today than ever, nearly 11 million, exceeding the 8.4 million unemployed, and dwarfing new hires. Not only are the unemployed not filling these positions, but workers are also quitting their current jobs. This is not just an epidemic among the highly skilled who could afford to do this; sectors employing lower-skilled workers such as construction and leisure and hospitality are also not immune.

A number of plausible explanations have been put forth for this unusual roadblock to post–COVID-19 U.S. economic recovery: the Delta variant has made workers cautious; the jobs are not where the workers geographically are; the unemployed do not have the skills for available jobs; wages are low; and, generous stimulus checks and extended unemployment benefits have given workers the luxury of waiting for jobs to their liking (though ending these benefits appears to have had little effect).

A recent Gallup poll points to another possibility. A higher percentage of workers than ever, nearly three-quarters, are disengaged with their jobs. Many feel burned out, especially women. And many have indicated that the pandemic has made them reassess their priorities in life and seek more of the elusive work-life balance even if it might mean cutting down on consumption.

Many workers have indicated that the pandemic has made them reassess their priorities in life and seek more of the elusive work-life balance even if it might mean cutting down on consumption.

While work has been viewed as providing meaning, the debate over how much to work, leaving enough time for other meaningful activities, is hardly new. Anthropologists have long quarreled with economists that the problem of scarcity, which underpins much of economic inquiry, is an artificial construct. They note ever-expanding wants of people creates scarcity. For instance, Marshall Sahlins wrote (PDF), a “good case can be made that hunters and gatherers work less than we do; and, rather than a continuous travail, the food quest is intermittent, leisure abundant…” The implication seems clear; cut down wants and people will have more time to pursue other meaningful activities.

In this, they echo philosopher Arthur Schopenhauer who a century earlier lamented the endless striving nature of the will—his conception of the inner essence of everything—since any “attainment soon begets satiety: the end was only apparent, possession takes away the charm; the wish, the need, presents itself under a new form…”

Economists are likely to respond that in a market democracy there is ample choice for many workers to choose where and how much they want to work (though the pressure for conformity could be as strong as market forces). They would not disagree that work can provide meaning and have studied the feeling of worthlessness caused by long unemployment spells.

And even the most basic economic models feature workers deciding how much of that scarcest of commodities—time—to allocate to and derive utility from nonmarket activities. Even if these models tend to be silent on the exact nature by which these activities can contribute to meaning and happiness, economics of happiness has become a flourishing subfield.

Countries and companies have not been oblivious to the debate on work hours, a critical component of the work-life balance that allows workers to derive meaning outside of work. Reduced work hours have been found to decrease stress and burnout, without affecting traditional economic measures such as productivity. Others have persuasively argued that the opposite of work, rest, not only gives meaning to life but also allows one to get more done.

If this debate is old, why might American workers be acting upon it only now? The pandemic has been a once-in-a-lifetime event that has shaken us out of our routines and motivated a reappraisal of many institutions and activities. With many external activities curtailed, American workers might have had the extra time to both savor and introspect on what matters most to them. The mathematician and philosopher Blaise Pascal saw this need for people to be relieved of diversions, “for then they would see themselves: They would reflect on what they are, whence they came, whither they go, and thus we cannot employ and divert them too much.”

In a market democracy, whatever their motivations, workers ultimately decide the nature and amount of work they want to pursue.

The Great Resignation is perhaps one of the reasons post-pandemic GDP growth in the second quarter was lower than expected. In this sense, suggesting that meaning could be derived from life-affirming activities other than work might seem retrograde or even un-American. But work, and the material well-being it brings, is not the sole means of the “pursuit of happiness” enshrined in the U.S. Declaration of Independence.

In a market democracy, whatever their motivations, workers ultimately decide the nature and amount of work they want to pursue, thereby determining the aggregate labor supply and economic outcomes. As this process unfolds, it might be prudent for business leaders and policymakers who are offering the carrot of sign-on bonuses and higher wages, and wielding the stick of curtailing benefits, respectively, to also make jobs more meaningful. And be cognizant that work by itself can go only so far in providing meaning to life.

The future of work may be here in more ways than one.

Krishna B. Kumar is director of international research at the nonprofit nonpartisan RAND Corporation, where he holds the distinguished chair in international economic policy. He has researched labor markets in several countries.