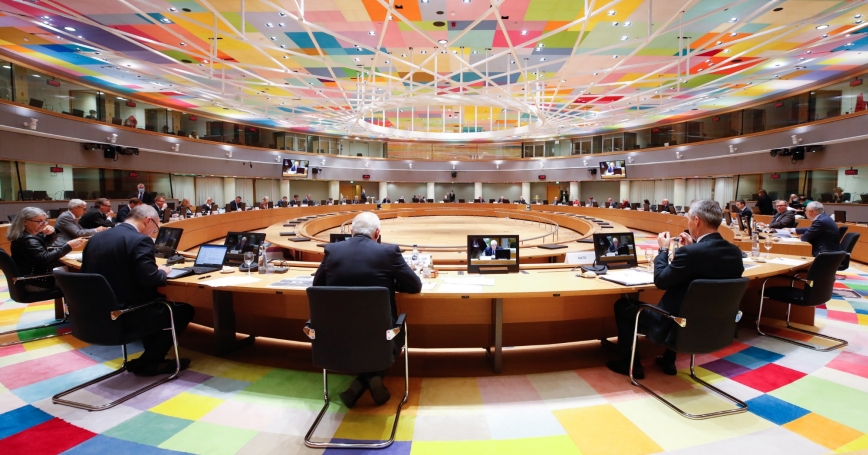 Photo by Mario Salerno/Council of the EU

Leaders of EU member states and institutions have recently renewed calls for Europe to assume a greater role and increased autonomy in transatlantic and global security and defence. Successive U.S. administrations have welcomed a larger European role in defence, and it has become a more urgent priority for the Biden administration as it rebalances its defence posture and security cooperation to the Indo-Pacific region. However, there is disagreement within and among EU member states on the scope and goals of strategic autonomy, as well as fears in Washington that it could undermine NATO cohesion and capabilities.

A new report by the RAND Corporation reached several conclusions about how Europe and the United States could work together to reduce misperceptions about strategic autonomy and chart an outcome that could enhance transatlantic solidarity and security.

First, EU leaders could seek agreement on what European strategic autonomy is and how it relates to other elements of European security and defence cooperation and how they want to engage in these areas with the United States and NATO. France, for example, supports the implementation of strategic autonomy at the supranational level and is also the most capable military power (and only nuclear power) in the EU following the departure of the UK. This concerns some states (PDF)—notably the Baltic states and Poland—who see the French-led European strategic autonomy as a potential competitor to the U.S.-led NATO, whom they had historically seen as their ultimate guarantor of security.

As long as EU member states' concepts for strategic autonomy continue to diverge and broaden in scope, ambiguity will hamper progress in its realisation.

As long as EU member states' concepts for strategic autonomy continue to diverge and broaden in scope, ambiguity will hamper progress in its realisation.

Second, Washington could adopt an unambiguously supportive approach to European strategic autonomy. Broad U.S. encouragement could be coupled with renewed calls for Europeans to allocate sufficient resources to EU defence integration initiatives and a continued emphasis on meeting NATO capability targets and regionalisation that can achieve greater burden sharing in practice.

Washington could also endorse outputs from the EU's Strategic Compass initiative which aims to identify and then bring about EU member state agreement on what joint EU goals and objectives should be in four areas—crisis management, resilience, capabilities, and partnerships—in order to operationalise the EU's strategic autonomy and clarify required capabilities. Furthermore, it could encourage the EU and its member states to seek a clear definition and manifestation of strategic autonomy that can be reflected in the forthcoming NATO Strategic Concept and accepted by external partners, particularly the United States and the United Kingdom.

Third, there may be a need for a sustained dialogue among EU and NATO member governments and institutions, on both strategic and working levels, to agree on a set of tasks and missions that Europe should be able to handle on its own, and those for which a strong European contribution to NATO is essential, as a first step in clearly delineating the responsibilities of NATO and of the EU.

Greater EU political cohesion and progress in producing defence capabilities may be vital prerequisites. Better integration of the defence industrial and capability-focused initiatives of the European Commission and European Defence Agency, as well as various minilateral defence groupings could produce more effective and interoperable European military forces for either EU or NATO missions. Relatedly, seeking to restore a constructive relationship with the UK in defence matters could enable the EU to benefit from its significant military capabilities and maintain an integrated European industrial base.

What European strategic autonomy in defence will look like may be shaped not only by internal efforts by the EU and its member states and U.S. policy, but also by wider geopolitical developments, particularly related to Russia and China.

There remain many contentious issues to be resolved, for example, the question of access to defence equipment markets and export restrictions. Yet, the potential overarching benefits of achieving European strategic autonomy in defence for the EU, NATO, and the United States would seem to merit sustained transatlantic dialogue and likely a supportive stance by current and successive U.S. administrations.

This commentary originally appeared on Encompass on November 18, 2021. Commentary gives RAND researchers a platform to convey insights based on their professional expertise and often on their peer-reviewed research and analysis.