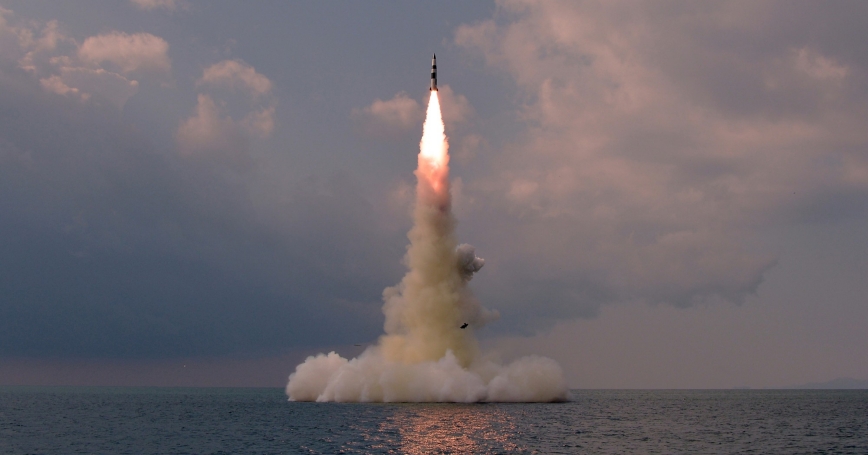 A new type of submarine-launched ballistic missile being launched in waters off the east coast of North Korea in a photo released by the North Korean Central News Agency on October 20, 2021

Nuclear talks between the United States and North Korea have hovered at a standstill since 2019, when then-President Donald Trump and Kim Jong-un walked away from the negotiating table in Hanoi with a “no-deal.” To date, there has been no contact between negotiators in Washington and Pyongyang aimed at resuscitating talks over the Kim regime's nuclear weapons program. And to the consternation of U.S. officials, Pyongyang has continued expanding its suite of missile delivery capabilities and appears to have restarted operations at its main nuclear facility, Yongbyon (PDF), to produce plutonium to build nuclear weapons. The Democratic People's Republic of Korea (DPRK) continues to accuse the United States of pursuing a hostile policy towards the Kim regime and even warned Washington of a response that could leave the country in a very grave situation.

This surely sounds foreboding. With the door to diplomacy seemingly closed and North Korea marching forward on weapons development and making threatening statements, what are the prospects for Pyongyang's denuclearization and peace on the Korean Peninsula?

Pyongyang's Nuclearization and Disinterest in Peace

Nuclear weapons are here to stay in North Korea. Earlier this year, Kim underscored the primacy of the DPRK's nuclear weapons program for the country's existence by describing it as its “strategic and predominant goal (PDF) in building our ideal powerful socialist state.” He also announced plans to further develop “ultra-modern tactical nuclear weapons,” including tactical rockets and ballistic missiles. True to its leader's word, Pyongyang demonstrated an array of new missile capabilities, including a hypersonic missile capable of carrying a nuclear warhead, a submarine-launched ballistic missile, and a cruise missile.

Nuclear weapons are here to stay in North Korea.

These developments reinforce North Korea's unbending position on preserving its nuclear weapons program, reflected in Kim's bottom-line offer to Trump at the Hanoi summit—shutting down fissile material production facilities at Yongbyon in exchange for Washington's sanctions relief. Not only would this have allowed Pyongyang to keep its nuclear weapons systems and facilities, the revenue generated from sanctions relief would have likely been funneled back into beefing up the very weapons programs the United States, South Korea, and the international community are trying to stop. Prospects for the Kim regime's denuclearization, therefore, are faint at best.

North Korea's intransigence on its nuclear weapons program has implications for the peace process on the Korean Peninsula. Kim's determination to use these weapons to endanger the security of its most proximate neighbor, South Korea, as well as the stability of the region and U.S. interests, jeopardizes progress for peace and tension-reduction with Washington, Seoul, and the international community. In addition to its nuclear and missile threats, the DPRK also resorts to conventional military provocations to pressure its neighbors.

Pyongyang's June 2020 demolition of the inter-Korean liaison office—a symbol of the development of inter-Korean cooperation and peace settlement—dashed Seoul's hopes of fostering inter-Korean cooperation. The DPRK has also violated the Inter-Korean Comprehensive Military Agreement on several occasions, including conducting artillery drills near the Northern Limit Line and firing gunshots at a South Korean guard post in the demilitarized zone. The DPRK, therefore, appears to not only resist efforts to improve relations with Seoul; in fact, it appears to go the extra mile to convey the message to the international community that it has little appetite for a peace process.

Where does Pyongyang's determination to nuclearize and its low appetite for peace leave the situation? The Biden administration continues to signal its willingness to meet with the North Koreans, anytime, anyplace, without conditions. At the same time, the United States appears to maintain its position on the North Korean nuclear weapons and missile threat, including the full implementation of U.N. Security Council resolutions and the goal of complete denuclearization of the Korean Peninsula. It also continues to back the continued presence and role of the U.S. Forces Korea in Seoul to prevent armed conflict on the Peninsula. Though the Biden administration's North Korea policy has not yet been fully articulated to the public, this suggests that Washington will maintain conditions for an actual agreement with the North Koreans, if and when the time for negotiations resurfaces.

South Korea's Moon Jae-in administration has been vigorously pressing for an end-of-war declaration with North Korea.

South Korea's Moon Jae-in administration, for its part, has been vigorously pressing for an end-of-war declaration with North Korea. Blue House officials seek to persuade both North Korea and the United States to support this proposal, on the grounds that the declaration could help build trust with the North Koreans and lead to a resumption of nuclear negotiations and a restart of the peace process. This proposal, however, has been met with challenges. North Korea has evaluated Moon's end-of-war declaration proposal as “an admirable idea,” but placed the condition that Seoul end its “hostile policy” towards Pyongyang—likely alluding to the U.S.–South Korea joint military exercises which, according to the Kim regime, are aimed at North Korea. Washington also appears wary of signing this accord in light of the DPRK's ongoing nuclear weapons development and missile provocations and the potential ramifications of an end-of-war declaration on the U.S.–South Korea alliance and regional security.

South Korea has recently sought China's support in its push for the end-of-war declaration. Beijing expressed willingness to back Seoul's bid on the grounds that the declaration could contribute to building peace and stability on the Korean Peninsula. Amid the United States' wary stance on the declaration and rising tensions between Washington and China, Seoul's bid to rally support from Beijing on this declaration may not only place the U.S.–South Korea alliance on tenuous footing and accentuate the divergence in the allies' positions on key bilateral concerns. It could also call into question the Moon administration's position between the United States and China in their competition for influence in the region.

It seems North Korea will continue to enhance its nuclear arsenal and missile technology and harbors the intent to use these weapons to endanger the peaceful interests of the United States, South Korea, and the region. This leaves the perennial question: how will Washington, Seoul, and the region respond to a growing North Korean nuclear threat?

This commentary originally appeared on Prospects and Perspectives on December 16, 2021. Commentary gives RAND researchers a platform to convey insights based on their professional expertise and often on their peer-reviewed research and analysis.