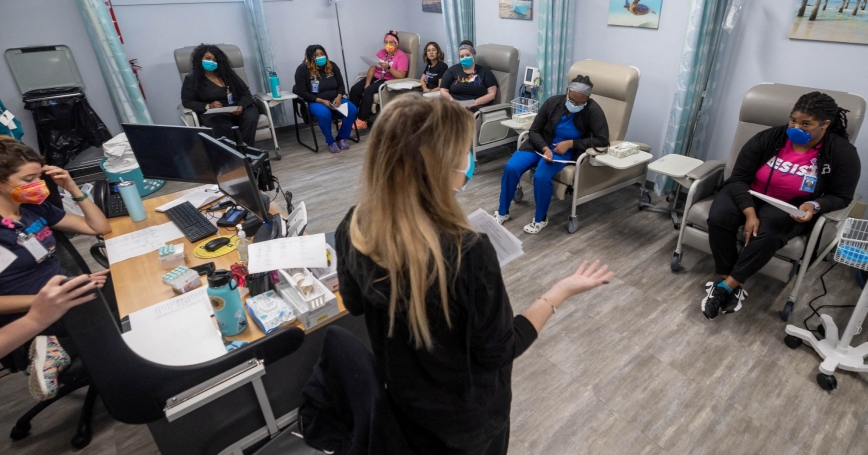 A Planned Parenthood clinic manager prepares her staff for the enactment of a 24-hour waiting period for abortions, Jacksonville, Florida, March 16, 2022

The U.S. Supreme Court's decision in Dobbs v. Jackson Women's Health Organization eliminating the constitutional right to abortion immediately created a chaotic information environment for patients and providers. Very quickly, individuals will need to understand a variety of regulations that may influence if, how, when, and where they can obtain an abortion—all of which may differ state to state. Is a woman allowed to end an ectopic pregnancy, for instance? Can a pregnant person who lives in a state where it's banned get a medication abortion? What is criminalized or subject to civil penalties by what state legislature?

As the abortion-rights fight moves to the states, the battle for information influence is sure to become more pitched. Providers and potential patients will need clear, trustworthy, up-to-date guidance—and to be protected from bad information.

Abortion is already a minefield of medical misinformation—and, in some cases, deliberate disinformation. For example, some public health departments list abortion resources on their websites—but knowingly or unknowingly link to deceptive organizations, such as crisis pregnancy centers. These antiabortion organizations mimic clinics, but provide limited, biased, or unscientific health information.

One study looked at 348 crisis pregnancy centers that had been included in state-provided abortion resource directories. The researchers found that 80 percent of them had at least one piece of misleading or false information on their websites. Most often they suggested abortion had some link to infertility, negative mental health outcomes, or breast cancer—all of which are untrue.

Abortion is already a minefield of medical misinformation—and in, some cases deliberate disinformation.

In some cases, it is state legislators who have pushed medical misinformation. In 1992's Planned Parenthood of Southeastern Pennsylvania v. Robert P. Casey, the governor of Pennsylvania, the Supreme Court allowed “Woman's Right to Know” laws, which require patients to be told or given details of fetal development. The court allowed this so long as it was “realistic” and “accurate scientific information.” But when researchers from Rutgers University had medical experts review the accuracy of these informed consent booklets from 23 states, they found that 31 percent of statements about fetal development in these materials were medically inaccurate.

Internet search algorithms also can be problematic, pointing users to fake clinics when they are looking for abortion providers. A recent study of Google search results in states with so-called “trigger laws” found that of 70 Google Maps search results, 26 led to the location of fake antiabortion clinics.

Four potential sets of stakeholders could choose to lead the charge on preventing abortion misinformation.

The first are states where the right to abortion is protected. Many of these states, including California, Massachusetts, and Connecticut, already have strategic plans to help ensure access to reproductive health care. Those plans include expanding who can provide abortion care to include nurses and midwives, and options to fund procedures.

But states could make combating misinformation part of their plans. For example, states could communicate clearly to out-of-state residents about how their laws may protect those crossing state lines to get an abortion.

Independent, data-driven organizations in the reproductive health space, like Power to Decide, could play a critical role. Some of these groups already track state and federal policies and support community education. But they will likely need more funding and other support to scale up their work and broadcast its availability.

Tech companies could play a vital role in safeguarding—or even aggregating—accurate information. Search engines and social media are where most people, but particularly young adults, initially seek out information. These companies could also choose to proactively monitor and remove false or misleading information around abortion, as they claim to around other false medical claims, like vaccination safety. It will also be important to protect the privacy of their users who may be seeking abortion information online.

Finally, large employers and health insurers could contribute to combating misinformation by being transparent about abortion benefits and coverage policies for employees. Is out-of-state travel for abortion services an explicit benefit, as some companies have just announced? What percentage of costs will insurers cover for an abortion procedure? This information should be easy for people to find.

Those efforts would collectively go a long way. But they may not reach the people who are most likely to be affected by the Dobbs v. Jackson decision. There will need to be significant efforts to think creatively and work collaboratively to deliver accurate information to younger people, people in rural areas, and people of color. The gross inequities in access that already exist are sure to get worse for them.

Abortion care and access to reproductive health writ large is entering a new stage in the United States. Misinformation has long been a tactic used by some who oppose abortion rights. Left unchecked, misinformation could become a major barrier to individuals trying to navigate their way to safe, legal, and quality reproductive care.

Julia Rollison is a senior policy researcher at the RAND Corporation. Her research focuses on pressing public health issues as well as health care access and quality, with emphasis on reproductive health and the health care workforce.

This commentary originally appeared on Route Fifty on July 5, 2022. Commentary gives RAND researchers a platform to convey insights based on their professional expertise and often on their peer-reviewed research and analysis.