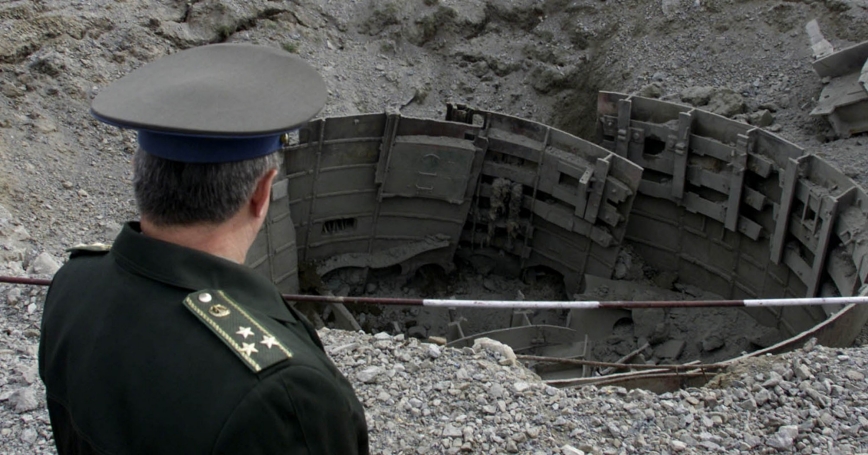 A Ukrainian army officer looks at a destroyed SS-24 missile silo near the town of Pervomaisk, Ukraine, October 30, 2001

After the collapse of the Soviet Union, nuclear weapons that had been staged in Warsaw Pact states, including Ukraine, were transferred to Russian territory. This was done as part of a straightforward deal: The former Soviet states would voluntarily adopt a nonnuclear status in exchange for security guarantees that they would not be threatened with nuclear weapons in the future.

In Ukraine's case, the transfer of custodianship of the nuclear weapons also was contingent upon the assurances of Russia, the United States, and the UK to Kyiv that its sovereignty and territorial integrity would be respected. Territorial integrity has been among Kyiv's main concerns, expressed repeatedly during the post–Cold War negotiations and afterward. These commitments were officially professed in the Budapest Memorandum on Security Assurances in 1994. As one of the signatories, Russia assumed an obligation to serve as a guarantor of Ukraine's sovereignty and territorial integrity.

Ukraine has abided by all its commitments not to pursue nuclear capabilities, but Russia violated the agreement by invading its western neighbor and threatening to use nuclear weapons against anyone who would intervene into its so-called “special military operation.”

Beyond the terrible human toll, by breaking its commitment, Russia seriously damaged the nuclear nonproliferation treaty structure in several ways, and may have taught other nations dangerous lessons when it comes to nuclear policy.

By breaking its commitment, Russia seriously damaged the nuclear nonproliferation treaty structure in several ways, and may have taught other nations dangerous lessons when it comes to nuclear policy.

First, the biggest nuclear state has invaded the state that officially gave up nuclear weapons. It might serve as a lesson on why countries should not give up these capabilities if they possess them. North Korea has already justified its nuclear weapons development by the experience of Iraq and Libya. These countries' regimes collapsed before they realized their nuclear ambitions. Despite the pressure, Kim's regime sees nuclear weapons as an insurance policy, which makes the country even more resistant to the efforts to denuclearize the Korean Peninsula.

The invasion can be treated as an even more vivid lesson by the states that neither have nuclear weapons arsenals nor are protected by the great powers' nuclear shield. Countries that have not pursued nuclear weapons may do so now to ensure no nuclear-armed state will ever invade (PDF) them. Iran has reached the breakout time, or the time required to enrich enough weapons-grade uranium to produce one nuclear weapon, which is an essential step in acquiring nuclear capabilities. Despite the tremendous pressure from the international community to return to the Joint Comprehensive Plan of Action, which curbed its nuclear capabilities, Iran is even more reluctant to give them up. Based on Ukraine's experience, this country may treat its nuclear status as a pathway to secure its position in the Middle East.

Second, it is one of those few times in history that a nuclear power practiced so-called “offensive deterrence,” when nuclear capabilities are used not to deter the enemy's attack on one's or allies' territories, but to support its own invasion of a sovereign state through the threat of nuclear weapons use. Russia's 2020 nuclear doctrine, highly debated even among Russian experts, allows for nuclear weapons use to prevent the escalation of an armed conflict and ensure favorable terms of conflict termination for Russia. The regime sends ambiguous messages with President Vladimir Putin calling nuclear war unacceptable, the foreign minister Lavrov saying that Russia does not plan to use nuclear weapons in Ukraine, but the state propagandists frequently and explicitly considering the nuclear escalation as an option.

Gradual and limited support of Western countries, especially in the first months of the war, has demonstrated that nuclear weapons carry strong coercive power.

Third, any state with a nuclear weapons program and offensive plans could be inspired by Russia's war on Ukraine. While not demonstrating expected military superiority in many domains and not being able to achieve its objectives, Moscow repeatedly reminded the West about its nuclear capabilities. Gradual and limited support of Western countries, especially in the first months of the war, has demonstrated that nuclear weapons carry strong coercive power. Nuclear capabilities can allow the state to use conventional aggression to maintain control of its sphere of influence, while any intervention by outsiders is deterred by the threat of nuclear escalation. China might attempt to find a way to use nuclear coercion and Russia's experience in a similar way to deal with the Taiwan issue.

Russia's war on Ukraine has created a dangerous precedent. A state that gave up its nuclear arsenal in exchange for security assurances has been attacked by a nuclear power that served as one of its security guarantors. Russia's ability to use the nuclear coercion to support its unprovoked aggression has become a negative showcase for potential proliferators, leading to a deadlock of previously existing nonproliferation practices. Getting Russia to withdraw its forces from Ukraine and once again pledge to respect Ukraine's sovereignty could be key to restoring the integrity of the nuclear nonproliferation regime—perhaps a distant goal at the moment, but a critical one for the stability of the world far beyond Ukraine's borders.

Polina Sinovets is the head of Odesa Center for Nonproliferation at the Odesa I.I. Mechnikov National University, where she is an associate professor of the International Relations Department, and is an affiliate professor at the University of Malta. John Parachini is a senior international and defense researcher at the nonprofit, nonpartisan RAND Corporation and a member of the Pardee RAND Graduate School faculty. Khrystyna Holynska is an assistant policy researcher at RAND, a Ph.D. student at the Pardee RAND Graduate School, and a visiting professor at the Kyiv School of Economics.

This commentary originally appeared on Breaking Defense on August 16, 2022. Commentary gives RAND researchers a platform to convey insights based on their professional expertise and often on their peer-reviewed research and analysis.