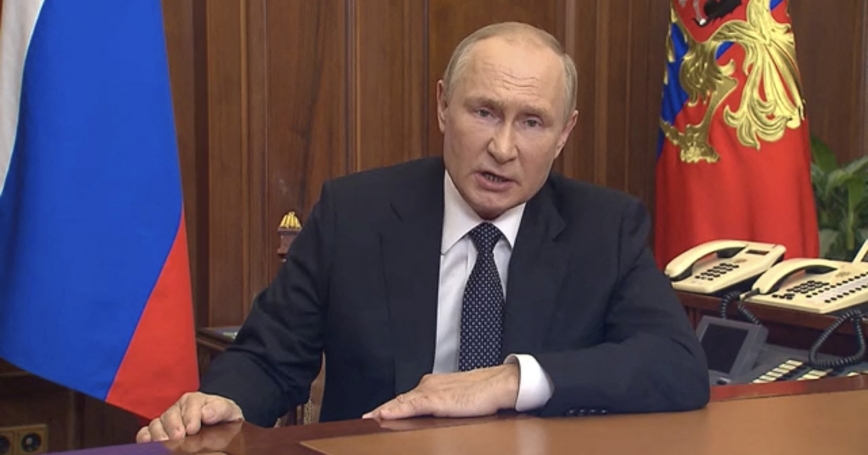 President Vladimir Putin of Russia appeared to double down today on his country's war effort in Ukraine, calling up hundreds of thousands of new troops, threatening Ukraine and the West, vowing to use “all the means at our disposal,” and pointing out that he is not bluffing.

Putin's remarks were met with condemnation from Western leaders and others. Here's what a few RAND experts had to say:

“The messaging … is clear. Putin is raising the stakes,” Samuel Charap, a senior political scientist at RAND, said in a tweet.

“When a leader has to say 'this is not a bluff,' he knows he has a credibility problem. I think it's fair to say that Russia has concluded its efforts to affect its adversaries' decisionmaking have failed. Their doctrine, FWIW, suggests upping the ante when that happens,” he added.

William Courtney, an adjunct senior fellow at RAND and former U.S. ambassador to Kazakhstan and Georgia agreed: “The Putin regime is raising the stakes and taking greater risks,” he said.

The Putin regime is raising the stakes and taking greater risks.

“The regime may be preparing to sustain or intensify combat, hoping to forestall Ukrainian advances. But mobilization could spark greater internal resistance—even regime change—to the extent a broader call-up is unpopular, battlefield losses persist, sanctions bite deeper into the economy, or elites or parts of the security sector sour on the regime or public unrest surges,” Courtney said.

Dara Massicot, a senior policy researcher at RAND, said in a series of tweets that Russia's mobilization is not likely to produce early benefits.

“Russia is muddling through. Its ad-hoc approach to replacing personnel and equipment risks overcommitting its remaining forces to missions it could struggle to bear,” she wrote. “Moscow has now ordered a mobilization which could unlock a lot of resources for them in a way its shadow/ad-hoc efforts cannot. Even if they did, it would probably take up to a year to see any benefit because their mobilization base has been dormant for so long.”

Earlier this week, prior to Putin's latest broadside, a group of RAND experts discussed the state of play in Ukraine during a media call.

Barry Pavel, vice president of the RAND National Security Research Division, said he expects the United States and the West to continue, and perhaps expand, the critical assistance they have been providing to Ukraine.

“I think the West is going to continue to do what it's been doing and, especially with the early success of the Ukrainian counteroffensive, I think that will continue. The only question is whether they dial it up in terms of more-capable equipment and more volume, if that's possible,” Pavel said.

He noted that the United States has been increasing its assistance to Ukraine, including providing more-sophisticated weaponry. “I do think the Biden administration is, over time and slowly, opening the spigot in terms of capabilities, and some of the things being considered, being provided now, were probably off the table before, early in the conflict. And so you're seeing an evolution of the pipeline,” he said.

Charap, meanwhile, predicted that some form of mobilization of new troops might be in the offing. Putin's announcement to mobilize some 300,000 reservists stopped short of a full mobilization, a move Charap said would “mark a fundamental transformation of the system.”

“A whole-of-country mobilization would dramatically transform Russia's political economy and risk the stability of the system in a way that nothing he's done so far has,” he said. “I do think they're going to continue to try to do these sort of soft mobilization things. But full mobilization is almost like a nuclear option in terms of domestic politics.”

Charap noted that Russian tactics changed somewhat in the wake of Ukrainian gains, with civilian infrastructure becoming a key target. This, he said, won't reverse the territorial gains by Ukraine in recent days.

“Immediately after the astonishing success of the counteroffensive, there was a switch to direct targeting of civilian infrastructure in a way that we hadn't seen before. It hasn't been particularly sustained, although it has continued,” he said. “The challenge is, you can do that all you like, but it's not going to reverse territorial losses.”

A whole-of-country mobilization would dramatically transform Russia's political economy and risk the stability of the system in a way that nothing Putin has done so far has.

Alyssa Demus, an associate international/defense researcher at RAND, said Ukraine's ground gains may be sustainable, but a range of factors could come into play to influence that.

“You know, it's hard to say at this point whether it's sustainable. I think it depends on a number of factors, the first being sort of the will of the Ukrainian military, which I think is incredibly strong at this moment. It also depends on the continued support from Western and NATO countries, not only in terms of providing military equipment and the type of support that we've seen so far, but also the will of the West and NATO countries to continue to essentially stand behind Ukraine,” she said.

Demus added that the changing U.S. political landscape is certainly part of the calculus.

“The U.S. Republicans and Democrats have been pretty united on their support to Ukraine. There are potential risks if that changes. And I know, for instance, that the Ukrainians are watching U.S. politics very closely,” she said.

“Evidence of Russian war crimes, and increasing evidence of mass graves, illegal targeting of civilian areas and infrastructure, torture, and sexual abuse point to the risks a renewed fight has for civilian populations if Russia's offensive is reinvigorated,” she said. “The West, and particularly NATO, should consider their next steps to protect human security in Ukraine, including critical civilian areas and civilian infrastructure, and the types of support needed from NATO allies to do so.”