A Moment of Strategic Clarity 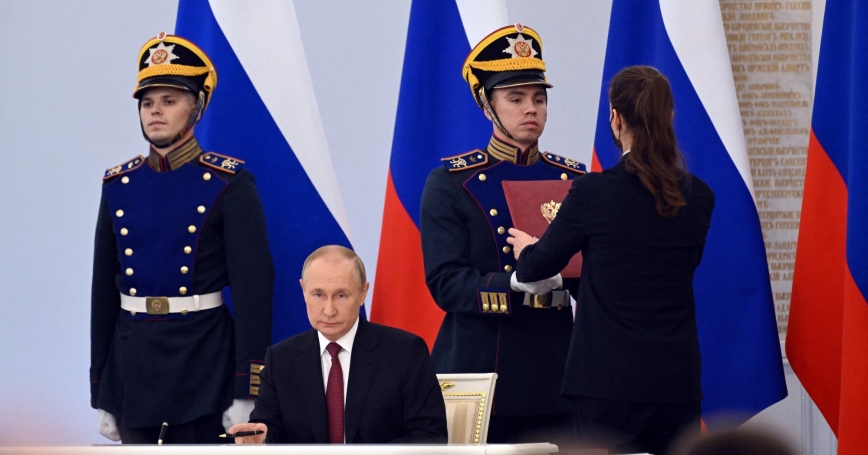 Photo by Grigory Sysoyev/Pool via Reuters

Russia's “partial mobilization” and its sham referendums to justify the annexation of four provinces in Eastern Ukraine create new sources of uncertainty about the future course of the war. Yet Russia's actions should also produce a rare moment of strategic clarity for Ukraine's partners: No viable path to negotiated peace remains, and any result short of Ukrainian victory will be, in the long run, a worse outcome for the rules-based international order.

On a macro level, much of the strategic debate around Ukraine since the start of the conflict has centered around three basic camps. The first—“back Ukraine until it wins”—was first adopted by the Biden administration and is now supported by a bipartisan majority in Congress, as well as a majority of the American public. While there have been ongoing debates over the past several months about the types of weapons Ukraine needs and the speed of their delivery, the messaging behind the overall support, along with the general approach—supplying Ukraine with the military wherewithal to withstand and repel the Russian invasion—has been constant. As has the desired end-state, which is the restoration of Ukrainian sovereignty.

On the opposite end of the spectrum is the “stay out” camp. Comprising an unusual coalition of “America First” nationalists, antiwar progressives, and—at one point—China hawks, this camp argues that U.S. national interests simply lie elsewhere. Ukraine's sovereignty, in their view, is not America's concern. Since Russia's invasion, this viewpoint has been largely pushed to the extremes of the political spectrum.

Any result short of Ukrainian victory will be, in the long run, a worse outcome for the rules-based international order.

The third, and more politically significant, alternative falls somewhere between the first two. This camp decries Russia's barbarity and lauds Ukrainians' bravery while, at same time, worrying about Russian escalation and, in particular, Russia's use of nuclear weapons. Members of this camp—from Henry Kissinger to the New York Times editorial board—have thus far struggled to find a diplomatic off-ramp leading to a negotiated peace in the name of “strategic prudence.” Even after everything that has happened over the past seven months of war, there are still voices calling on the United States to cut a deal.

Yet even before Russia's latest escalation, it was not clear that the “cut a deal” approach was ever viable. The primary proponents of such an approach were and remain people other than the Ukrainians themselves. Polling continues to suggest that Ukrainians overwhelmingly oppose any sort of territorial concessions. Russian polling, similarly, suggests support for fighting on—although like all opinion surveys in authoritarian countries, such data needs to be taken with a grain of salt, particularly now that Russia is suffering major reverses on the battlefield and the broader mobilization makes it harder for many Russians to sit the war out. But even if Russian public support for the conflict is softening, the Kremlin has remained as hardline as ever.

Now, with the Russian mobilization and declared annexation, whatever prospects there were for a negotiated peace seem to have all but vanished. On a practical level, Russia's annexation not just of Donetsk and Luhansk, where Russia has supported an insurgency since 2014, but also more recently occupied provinces of Kherson and Zaporizhzhia severely limit the geographic contours of any potential deal. By annexing large swaths of Ukraine, Russia has functionally limited its ability to negotiate over boundaries, unless it wants to trade away what it now claims to be parts of Russia. Russia can offer Ukraine a cessation of hostilities, but that's about it. And since Ukraine has ruled out any territorial concessions to Russia, and is unlikely to trust any Russian promise of nonaggression, any future negotiations are likely to be stillborn.

Russia's mobilization has also constrained the remaining political space for a deal. By losing the facade of “special military operation” and declaring the first mobilization since the Second World War, Russian President Vladimir Putin has invested massive personal political capital in his invasion's success. Ukrainian President Volodymyr Zelensky has an equally large reputational stake in repelling Russian forces. Furthermore, with mounting evidence of Russian war crimes, and Russia intent only on doubling down on its aggression, there is little reason to believe that any Ukrainian leader could, at this or any point in the future, cut a deal.

Even if a deal were plausible, it is no longer clear that it would be in the strategic interest of the United States and Ukraine's other partners to push for one. The tide of international public opinion is clearly turning against Russia. Far from granting it legitimacy, Russia's sham referendums in occupied Ukraine have been so brazen that even Russia's nominal allies have rejected them. India has lambasted Russia's actions, China has voiced its concerns, and even reclusive North Korea felt the need to deny that it is selling weapons to Russia. Should Russia continue to dig in and make good on its nuclear threats, it would only deepen its isolation.

Moreover, even if negotiated peace freezes the conflict in Ukraine temporarily, there is no guarantee that the conflict stays frozen in the long run. Other “frozen” conflicts have reignited and continue to fuel ongoing instability. Russia's initial invasion of Ukraine in 2014, perhaps, offers the best example. While violence tamped down after a few months and world attention shifted elsewhere, the war itself never ended and eventually boiled over in an even more violent form.

If a negotiated peace proves illusory in the end, then cutting a deal merely gives Russia time to regroup and press on at a later date. While Russia has lost thousands of vehicles, and tens of thousands of service members, the Russian military will, in time, rebuild. When it does, the Russian conventional threat would return, especially if Russia emerges from the conflict aggrieved and out for revenge.

And pushing for a bargain now does nothing to forestall Russian nuclear use over the long term. Sure, if Ukraine and its partners accede to Russia's demands, then Russia may, for the moment, have little reason to push the button. But that does not prevent Russia from upping its demands at a later date, once it faces a more favorable geopolitical environment. Unless the United States and its allies want to turn the other cheek to Russian nuclear blackmail over the long haul, striking a deal now would seem to do very little.

Unless the United States and its allies want to turn the other cheek to Russian nuclear blackmail over the long haul, striking a deal now would seem to do very little.

Russia's actions have, above all, ensured that the Russia-Ukraine war is no longer just about Ukraine, Ukrainian democracy, or where the borders in Eastern Europe should lie. Indeed, the threat is far greater. Now, the war is about whether the United States and its allies want to live in a world where nations are able to annex territory by force, then compel submission with the threat of nuclear annihilation. That message—should it be legitimized—will echo around the world, throughout conflict zones in Asia, the Middle East, and beyond.

Ultimately, the United States and its partners seem to have just two options in Ukraine: They can ensure that Ukraine triumphs, or that it accepts the consequences of defeat. There appears to be no middle path, no grand political bargain, no easy out. And even if such a deal could be struck, the peace likely would prove short-lived and potentially set back stability in Ukraine and beyond. Russia's mobilization, annexation, and nuclear threats mean that Ukraine and its backers could face dark times ahead. The only thing scarier might be rushing for an early exit.

Raphael S. Cohen is director of the Strategy and Doctrine Program, RAND Project AIR FORCE and Gian Gentile is deputy director of the RAND Army Research Division at the nonprofit, nonpartisan RAND Corporation.

This commentary originally appeared on Lawfare on October 2, 2022. Commentary gives RAND researchers a platform to convey insights based on their professional expertise and often on their peer-reviewed research and analysis.