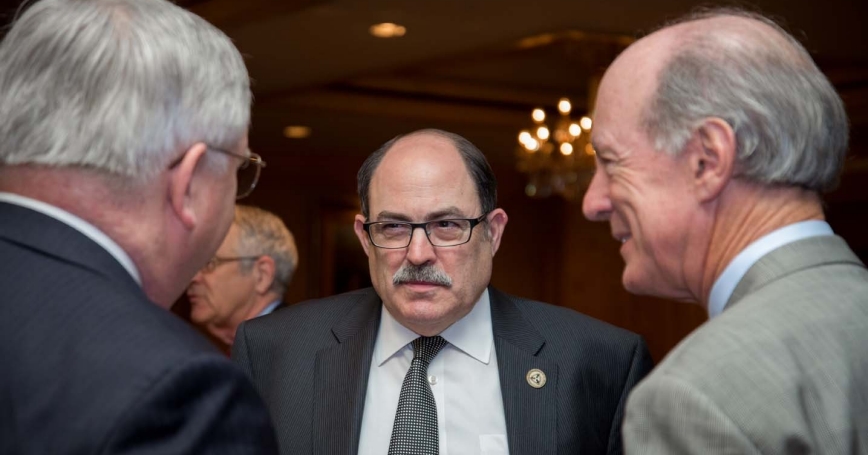 Dave Johnson at the 2014 RAND International Programs board meeting in Washington, D.C., June 2014

On October 30th, Dr. David E. Johnson, Col U.S. Army (retired), a principal researcher at RAND and a leading intellectual in the field of national defense and military history, passed away following a long illness. Dave was known as someone who called the shots as he saw them. His deep knowledge of military history provided a perspective to analyze problems and make sound policy recommendations that were valued by the senior decisionmakers in the Army and elsewhere. As Christine E. Wormuth, Secretary of the Army, told us, “Dave was a friend, a mentor, a caring and generous colleague to so many of us, and was unafraid to speak truth to power.” As Wormuth also recalled, Dave's love for the Army was evident throughout his basement study, which, “was covered floor to ceiling with books, paraphernalia, paintings, models, and figurines all having to do with the Army throughout history.”

A native of Texas, Dave graduated from Trinity University in San Antonio, Texas, in 1972 with a B.A. in history. Upon graduation, he received a Regular commission in the Army, serving in the Infantry, Quartermaster, and Field Artillery branches. As a field artillery officer, he commanded the 2nd Battalion, 11th Field Artillery in the 25th Infantry Division in Hawaii. While in the Army, Dave obtained a Ph.D. (1990) in history from Duke University; he also graduated from the Industrial College of the Armed Forces in 1994. His Ph.D. dissertation formed the basis of a highly successful military history book, Fast Tanks and Heavy Bombers, Innovation in the U.S. Army 1917–1945, published by Cornell University Press in 1998. Brian Linn, a professor of military history at Texas A&M, recalled “reading “Fast Tanks and Heavy Bombers“ for the first time and knowing that I wanted to follow a similar path. When I finally met Dave at the 2015 AUSA convention, after listening to him speak about military affairs, I understood how he was able to write such a brilliant book.”This book was but one of a very long list of articles and book-length works that Dave produced at RAND over the years.

In 1997, after a 24-year career, Dave retired from the Army. The next year, he joined the nonprofit RAND Corporation, in its Northern Virginia office, where he went on to play major roles in countless high-level projects, mostly for the Army, but also for the Office of the Secretary of Defense and the Air Force. Dave had leading roles in literally dozens of research projects, many of which involved examining the nature of future military operations and the future strategic environment. In these projects, Dave was the individual others often turned to. Col Ric Schulz, U.S. Army (ret) recalled meeting Dave in 2019, when Schulz was beginning work on the J7 Joint Warfighting Concept. “Dave immediately demonstrated an intellectual savvy that enabled the team to navigate operationally and politically challenging issues,” Schulz told us, adding that Dave's “counsel was always on the mark.”

Dave had leading roles in literally dozens of research projects, many of which involved examining the nature of future military operations and the future strategic environment. In these projects, Dave was the individual others often turned to.

LTC Michael B. Kim, Commander, 2-70 Armor, echoed what Schulz told us about Dave's knowledge and steadfastness, which never wavered, all the way up to the very end. Kim asked Dave to address the leaders of the 2-70 AR Thunder Battalion, 2ABCT, 1ID, to brief them on his observations in Ukraine before the Battalion's EUCOM deployment, at the end of this year. “I was not aware that Dr. Johnson was hospitalized the week prior to the presentation, and when I found out, I attempted to cancel the session,” Kim told us. Dave would not hear of it. “Dr. Johnson adamantly refused [to cancel] and stated that he would present from his hospital bed.” And sure enough, “on the morning of October 25th, 2022, Dr. Johnson briefed the Thunder Battalion on his observations in Ukraine, and his wisdom on combined arms warfare. His legacy as a warfighter, teacher, and mentor, will live on through the many that he influenced during his career,” Kim said.

Dave was, indeed, a teacher: from his hospital bed, within RAND and the Army, and from 2010 to 2020, as an adjunct professor at Georgetown University's Security Studies Program, where he taught courses in Grand Strategy. He was also an adjunct scholar, beginning in 2016, at the Modern War Institute at the U.S. Military Academy at West Point, where he continued teaching Grand Strategy, as well as the challenges of military innovation. As our colleague Mark Hvizda told us, “Dave's uncanny ability in the classroom [was] to pierce through complex subjects and ask the simple, direct questions that others struggled to articulate.” These questions, Hvizda went on, often paired sharp insights “with a sharper humor” and “refreshing humility.”

Over the years, one of Dave's most noteworthy traits was his strong desire to mentor junior staff and subordinates. Whether it was Army officers—from lieutenants to colonels—his students at Georgetown and West Point, or new staff at RAND, Dave took an interest, and devoted considerable time and effort to help. Dr. Nadia Schadlow, a senior fellow at the Hudson Institute, recalled how “Dave always read my essays, commented on them, and was a great source of encouragement and wisdom. He was a true intellect—someone who later in his career remained interested in the work of others.” And, Schadlow added, “he remained creative until the very end of his life—which means he was an optimist at heart. Dave—HR McMaster, U.S. Army (ret), former U.S. National Security Advisor told us—“was an empathetic, wise mentor to me and countless others. He would drop everything when someone needed assistance with a project, or just the sound advice that Dave always provided.” Our colleague Raphael Cohen put it simply: “When Dave spoke, people listened.”

Dave was also an avid reader who loved to travel, and always appreciated living in the Washington, D.C., area—particularly for all the Civil War battlefields within striking distance. Gettysburg was his favorite and, as is usually the case with military historians, he relished the opportunity to analyze the decisions made amid battle and debate various “what ifs” that might have changed the course of history. For those fortunate enough to visit Dave's home, it was always a great treat to see his huge collection of military models, prints, and memorabilia.

Dave's contributions to the U.S. military and the nation put him in a league of his own. His policy recommendations, writings, and the effect he had on the many people he mentored will stand as his legacy for many years to come.

Gen Charlie Flynn, Commanding General, U.S. Army Pacific, recalled the friendship he formed with Dave during his command of U.S. Army Pacific. “Dave set the tone for deep thinking and discussion. He was selfless with his work, producing great reflective pieces on our national security that require our candid introspection. He understood the value of Theater Armies, the significance of the Asia Pacific, and the importance of strategic communications to the range of audiences that senior leaders must influence. His frankness was refreshing, and it spurred a level of open discussion that we critically need.”

Dave Johnson will be greatly missed. Gen Christopher G. Cavoli, commander U.S. European Command noted that there is “no real way to explain the weight of Dave's loss. Dave was a relentlessly critical thinker. He made everyone around him think better. He woke up every day thinking about how to make the Army better.” His contributions to the U.S. military and the nation put him in a league of his own. His policy recommendations, writings, and the effect he had on the many people he mentored will stand as his legacy for many years to come. As General Cavoli rightly observed, “Dave made each of us better. We will miss him.”