Synthetic Opioids Are an Everything Problem

Fatal drug overdoses—primarily from illegally manufactured synthetic opioids—have increased sharply in recent years. And they're not slowing down. Potent and dangerous synthetic opioids affect a wide range of policy areas and require a comprehensive response. It's time to meet this everything problem where it is: everywhere.

Arnold Alier has been a paramedic since 1987. The past two years put a strain on first responders that he had never seen in all his time rushing from emergency to emergency.

“We had the pandemic with COVID, and then we had this shadow that kept following us the entire time,” he said.

That phantom stalking Alier—and paramedics across the United States—was an ever-growing number of overdoses from opioids. In recent years, the numbers of overdoses from illegally manufactured synthetic opioids has jumped.

As a leader at the South Carolina Department of Health and Environmental Control, Alier is working to stem this rising tide of deaths. He uses deidentified data from emergency medical services to zero in on overdose hotspots. It's part of a state program that helps first responders better target vulnerable areas. Alier continued to track the increasing fatalities from opioid-related overdoses even as he shifted gears to help paramedics and emergency medical technicians respond to a once-in-a-century pandemic. 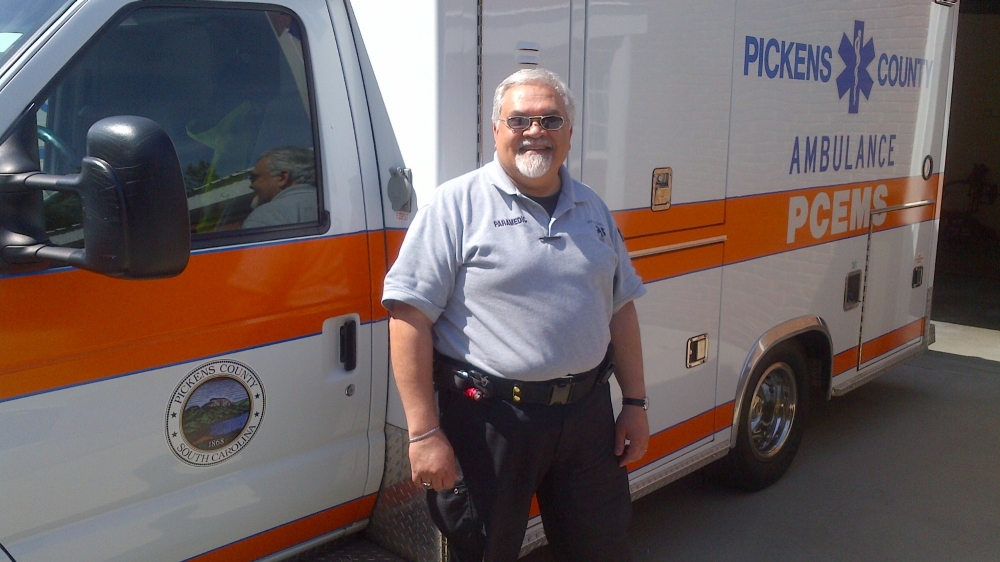 Arnold Alier stands outside of an ambulance in Pickens County, South Carolina, in 2013.

“Despite all our efforts, the numbers continue to increase,” said Alier. “It especially got worse during the pandemic, just like we have seen nationwide.”

Between June 2020 and May 2021, more than 100,000 Americans died from a drug overdose. This is more than twice the number of deaths from motor vehicle accidents or gun violence in that same period. About two-thirds of those fatal overdoses involved illegally produced synthetic opioids. The main culprit is fentanyl, which is easy to produce, highly potent, and—when used outside of health care settings—potentially deadly.

“More people have died from overdoses in this country in the last two decades than the combined number of Americans who have died in combat operations in every war America has taken part in,” said David Luckey, a senior international and defense researcher at RAND. “If that's not a reason to bring people together to come up with ideas on how to resolve this problem, I don't know what is.”

Luckey and Bryce Pardo, policy researcher and an associate director of the RAND Drug Policy Research Center, were given an opportunity to do just that by serving on the staff of the Commission on Combating Synthetic Opioid Trafficking. The commission was created by Congress to examine the threat of synthetic opioids and devise a strategic approach to countering the illegal flow of these drugs into the United States. 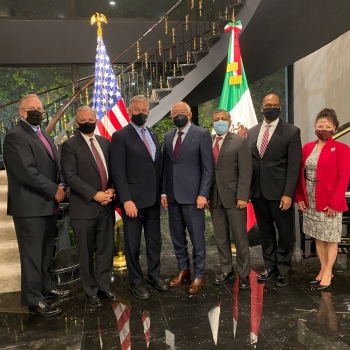 U.S. Ambassador to Mexico Ken Salazar, center right, with members of the Commission on Combating Synthetic Opioid Trafficking during a visit to Mexico in November 2021.

The commission, a bipartisan group of senators and representatives, executive branch members, and subject-matter experts, released its final report after conducting scores of interviews, receiving dozens of briefings, and analyzing data on drug use and supply. The Homeland Security Operational Analysis Center, operated by RAND, supported the commission with research and analysis.

In a letter in the commission's final report, co-chairs Senator Tom Cotton and Congressman David Trone emphasized the need for new ways to decrease demand for synthetic opioids and reduce overdose deaths.

“These alarming statistics are more than just numbers on a page; they represent devastating losses to families and communities, including personal losses to members of this very commission,” wrote Cotton and Trone.

Whether measured in lives or in dollars, the effect of America's overdose crisis “should shock everyone,” the commission's report reads. “It is unacceptable.”

The properties of some synthetic opioids make them ideal for illegal suppliers. And the sudden shift toward illegally manufactured fentanyl in recent years has contributed to deadly results among those who use drugs.

Unlike heroin, which comes from poppy fields that need time and space to mature for harvest, synthetic opioids can be made quickly, indoors, and with chemicals that can be easy to acquire.

“You only need one guy and access to precursor chemicals to manufacture it in a couple days. So, from a production standpoint, fentanyl is much, much, much cheaper, and it's easier to conceal,” said Pardo. “The dealers and traffickers are seeing the economic benefits of moving away from heroin and toward fentanyl. This is likely to set us up for a long-term transition toward fentanyl.”

Many synthetic opioids are also much more potent than heroin and other drugs. As little as one or two milligrams of fentanyl can be enough to achieve the same effect as 30 to 50 milligrams of heroin.

Roughly 170 Americans die each day from overdoses involving synthetic opioids. Many were not seeking out illicit fentanyl, at least not initially. Because fentanyl is easy to make, suppliers are now lacing it into heroin and other substances and pressing fentanyl into counterfeit pills designed to look like prescription opioids and other brand-name drugs.

“It's always been risky to buy drugs from street sellers. But today's supply is so much more deadly given that fentanyl is showing up in all sorts of drugs,” said Pardo.

Synthetic opioids are a national security problem and a homeland security problem; most enter the United States through Mexico, and China supplies a large portion of the necessary precursor chemicals. They're also a cybercrime problem, or at a minimum a regulatory issue, since the chemicals and the synthetic opioids themselves are advertised and sold online. And of course, with medical professionals like Alier doing their part to curb fatal overdoses, synthetic opioids are clearly a public health problem and a health system problem.

At the end of the day, it may be best to think of synthetic opioids as an everything problem—one that touches all policy domains and requires a comprehensive response.

It may be best to think of synthetic opioids as an everything problem—one that touches all policy domains and requires a comprehensive response.

“I look at it like a math equation. There's the supply side and the demand side. You need to take action on both to get to some resolution,” said Luckey. “You can't look at one without the other, and you need to look at the problem holistically and make every effort on both supply reduction and on demand reduction.”

The commission came up with 78 recommendations across five pillars for how to address the crisis from both sides of this supply-and-demand equation. These range from cracking down on money laundering by the criminal organizations that manufacture and smuggle synthetic opioids to exploring harm-reduction efforts that aim to mitigate the damage associated with substance use. The recommendations also include actions that could, if enacted, yield comprehensive and sustainable results, such as elevating the director of the Office of National Drug Control Policy to a cabinet-level position and enhancing the research and analysis of ongoing drug market trends.

The report serves as a road map, but policymakers in the executive and legislative branches will need to act on the recommendations to move the country forward. The commission's co-chairs and members understand the urgency and importance of this task and are rallying for a whole-of-nation response.

“It's time to come together, from all levels of government and both sides of the aisle, to address this epidemic and put an end to it once and for all,” Congressman Trone said.

This article is based on the final report of the Commission on Combating Synthetic Opioid Trafficking. The Commission was supported in its research, analysis, and report writing by the Homeland Security Operational Analysis Center (HSOAC), a federally funded research and development center operated by the RAND Corporation on behalf of the Department of Homeland Security.