The Resilience of Military Families 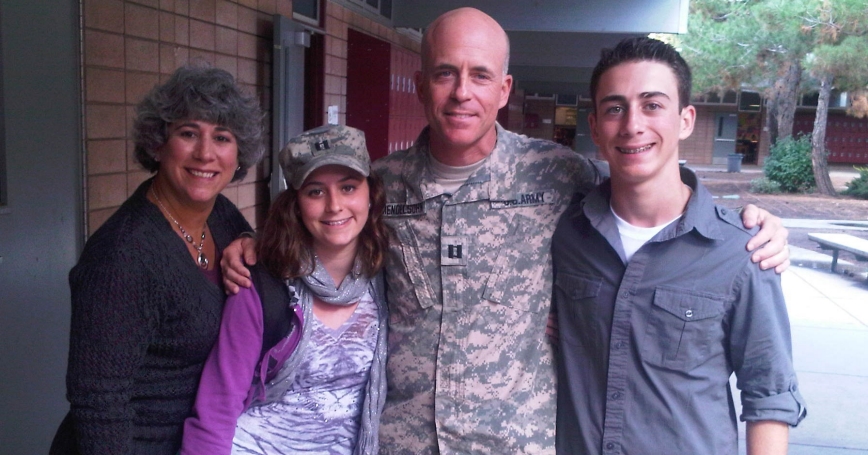 Debra Mendelsohn (left) poses with her husband, Bill (center), and their two children, Emelie and Doug, in November 2010

Photo courtesy of the Mendelsohn family

Debra Mendelsohn knows the midnight fear of having a loved one in danger, the juggle of raising two kids alone, the heartbreaking frustration of a bad Skype connection.

Hers is a military family, one that has held together through three deployments that could have stretched it to breaking—but didn't. She has come to trust what a pivotal RAND study recently found to be true: For the most part, military families get through it.

The study confirmed what prior research has found, that the deployment of a spouse and parent can shake a family to its core—but then it went a step further and found something unexpected. By several measures of family health and function, most of the study participants eased back to something approaching their pre-deployment baselines in the months after the homecoming.

“The families serve, too, but that doesn't mean we're broken,” said Mendelsohn, a protective hug of a mother whose husband, Bill, most recently deployed in 2010 to southern Iraq in command of an Army logistics unit. “We're just changed. It's part of the fabric of our family.”

The RAND study was unprecedented in scope, a three-year effort to answer a question made raw by years of combat in Iraq and Afghanistan: How do families cope when a loved one is sent to war? It was given such high priority inside RAND that around 30 researchers contributed to it.

The study was unprecedented in scope, a three-year effort to answer a question made raw by years of combat.

Service members and their families reliably name deployments as the most stressful experience the military throws at them. Studies have attributed higher suicide rates, divorce, and childhood behavioral problems to the strain of deployments. Yet no one had followed a large sample of military families before, during, and after a deployment to see what was happening.

RAND researchers tracked nearly 3,000 military families over three years, some of whom deployed and some of whom did not. That allowed the researchers to compare outcomes and see where deployments had an impact over and above the everyday strains of military life.

They found plenty of examples. Service members experienced more depression while they were away; their spouses experienced more anxiety and the stress of single parenting. Their children were more likely to exhibit emotional or behavioral problems that only got worse with longer deployments.

But another pattern began to emerge as the researchers followed the families into the fragile months after the homecoming. Again and again, they saw dramatic changes in family function during the deployment itself, but then a slow but steady return to pre-deployment baselines. By the end of that reintegration period—around eight months, on average—family relationships and well-being had generally returned to pre-deployment levels.

There were exceptions. Teenagers reported a letdown in the relationship when a deployed parent came home. Parents reported greater concern for the emotional well-being of their children, even long after a deployment.

Husbands and wives reported a significant drop in marital satisfaction over the course of the deployment cycle—but so did couples that did not experience a deployment. That was somewhat to be expected, the researchers noted: Declining satisfaction is one of the most reliable findings in any study of married couples over time, deployed or not.

But on outcomes ranging from parenting stress to spousal depression to teenage anxiety, the study highlighted what the researchers called the remarkable resilience of military families.

“We thought, no, for sure these families have to be worse off. That's what all the [research] literature says, that deployment is bad,” said Sarah O. Meadows, a senior sociologist at RAND who helped lead the study and recently briefed the White House on its findings. “But there is something about the families in our study that allows them to cope. At the end of the day, they seem to be all right.” 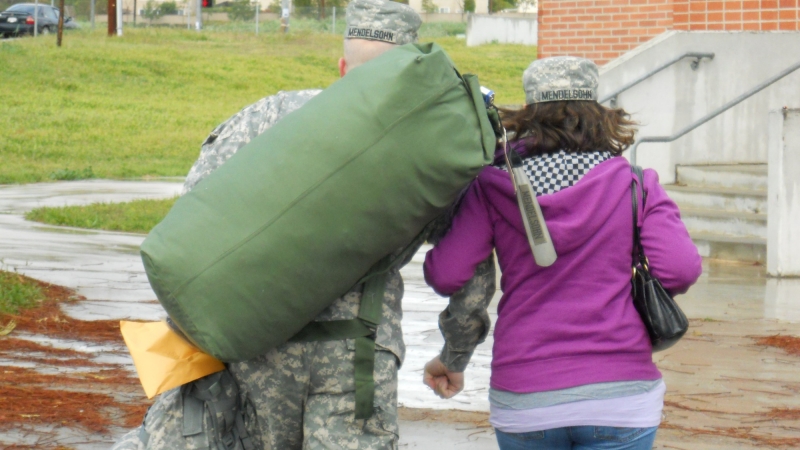 Bill Mendelsohn (left) walks alongside his daughter, Emelie, in November 2010

Photo courtesy of the Mendelsohn family

The Weight of Trauma

The researchers are quick to point out that the study was a product of its time. The families that participated were almost all veterans of at least one previous deployment. They were surveyed from 2012 until 2015, well past the bloodiest years of the wars in Iraq and Afghanistan, and a time when the pace of deployments had slowed.

Nonetheless, some of the service members in the study did experience the trauma of combat, physical injuries, or psychological shocks during their deployments. Those different kinds of trauma, the study found, weighed on families in different ways. Psychological trauma, for example, was associated with higher rates of marital aggression, while combat seemed to strain relationships between parents and teens.

In fact, those traumatic experiences—rather than the separation itself—might better explain the negative family outcomes so long associated with deployments, the researchers wrote. Those findings could help the military better anticipate which families might need more support after a deployment, even in the absence of PTSD or other clinical warning signs.

“It's the constant grind of the stress and the pressure that really adds up over time,” said Karen Ruedisueli, a deputy director of government relations at the National Military Family Association. Her husband is currently in Afghanistan with the Army, his fourth combat deployment. The last one, in 2010, was so dangerous that two officers from another unit were killed before their deployment had even officially started.

“I was sleeping with my fists clenched to the point that my arms were sore,” Ruedisueli said. “Has it brought us to our knees? No, but it most certainly has an effect.” 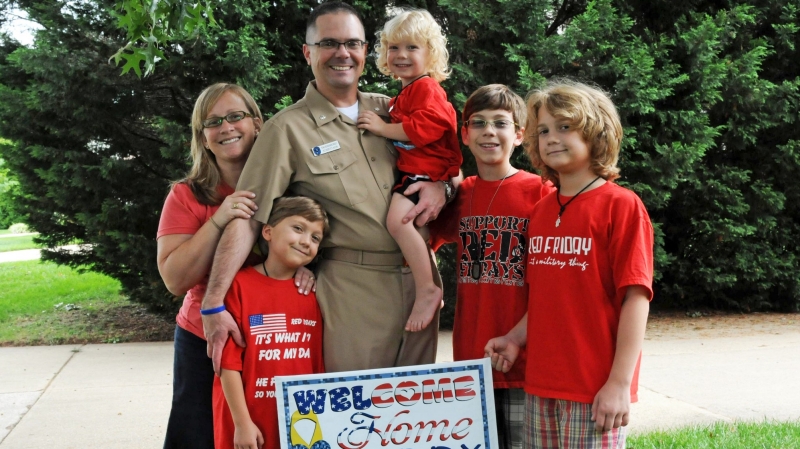 Erin Henderschedt (left) poses with her four sons and husband, Tom, while he was home on leave in 2011

Experiences like that underscore another central finding of the RAND study, the make-or-break importance of that period of family reintegration immediately following a deployment. The study highlighted a greater need for programs to ease families through that transition—to get more support to those leaving the military with mental-health issues, for example, and to shore up parent-teen relationships.

Erin Henderschedt has been through the deployment experience seven times. She documents the life of a Navy spouse and mother of four on her blog, The Deployment Diatribes. She compares family life during a deployment to riding a unicycle while juggling, and said it doesn't get much easier when the deployment ends.

“The cameras go away. And it can take months for everything to settle down.”

“You see the YouTube videos, the news clips, when service members come home,” she said from her home in East Asia, where her family is now stationed. “It's great, it's a fantastic moment. But then the cameras go away. And it can take months for everything to settle down.”

For Debra Mendelsohn, 18 months, to be exact, before her husband, Bill, turned to her on a coffee date and said, “You know, I finally feel like we're back.” He had to get used to the constant hum of chatter in a house with two teenagers after his tour in southern Iraq; she had to remember to introduce them as “our children” again, not just “my children.”

She didn't know that he had seen actual combat during his deployment until she picked him up at the airport and saw the combat badge under his jacket. She slugged him in the arm. But later, she realized it was an emblem not just of what he had survived, but of what they all had: “I felt,” she says now, “like we earned our own version of a combat badge, back home.”

This essay was also published in the Huffington Post on June 28, 2016.