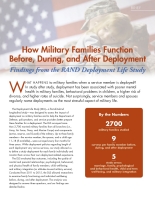 How Military Families Respond Before, During and After Deployment 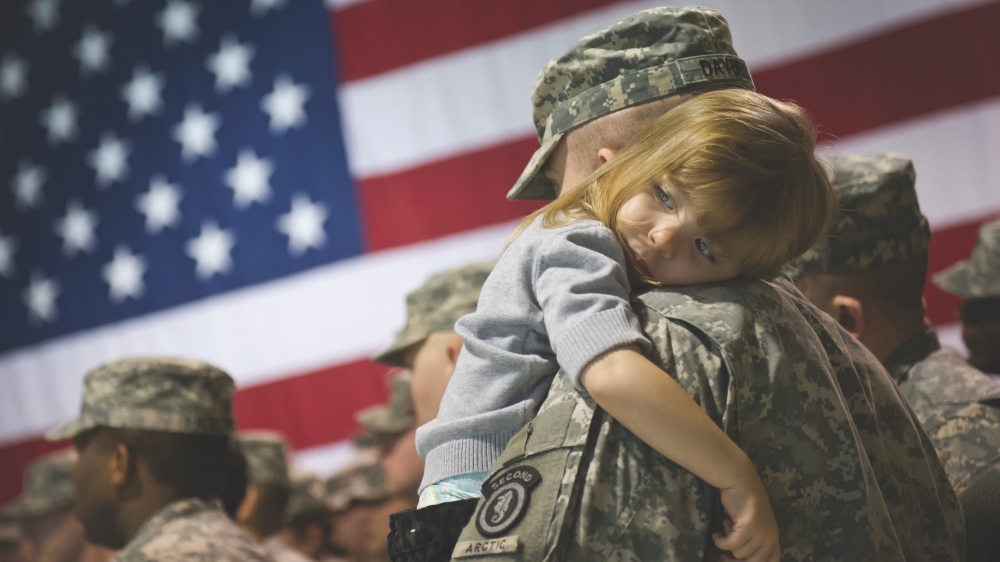 What happens to military families when a service member is deployed?

In study after study, deployment has been associated with poorer mental health in military families, behavioral problems in children, a higher risk of divorce, and higher rates of suicide. Not surprisingly, service members and spouses regularly name deployments as the most stressful aspect of military life.

surveys per family member before, during, and after deployment

The Deployment Life Study (DLS) — a first-of-its-kind longitudinal study — was designed to assess the impact of deployment on military families and to help the Department of Defense, policymakers, and service providers better prepare these families for a deployment. The DLS surveyed more than 2,700 married military families from all branches (i.e., Army, Air Force, Navy, and Marine Corps) and components (active, reserve, and Guard) of the military. Up to three family members — the service member, the spouse, and a child age 11–18 (if available) — were surveyed every four months for three years. While deployment policies regarding length of each deployment vary across services, our study allowed us to define a study deployment for each family individually and monitor them across their own deployment-related experience.

The DLS evaluated key outcomes, including the quality of marital and parental relationships; psychological, behavioral, and physical health of family members; child well-being; and military integration (or attitudes toward military service). Conducted from 2011 to 2015, the DLS allowed researchers to examine family functioning and individual well-being before, during, and after deployment. The analysis was designed to answer three questions, and our findings are detailed below.

1. What happens to military families over the course of a deployment cycle?

The most common theme was that military families are resilient. Despite the challenges they experienced before and during a service member's deployment, family relationships and other outcomes generally returned to previous levels once the service member came home.

Family relationships and other outcomes generally returned to previous levels once the service member came home.

During deployment, outcomes changed — some for the better (physical and psychological aggression between partners declined, service members reported a better family environment, higher parenting satisfaction, and less binge drinking) and some for the worse (increased depressive symptoms among service members and spouses, increased posttraumatic stress disorder and anxiety symptoms among spouses, elevated psychological symptoms in children). In some cases, service members and spouses had opposite reactions to deployment. For example, while service members as a group rated their experiences as a parent higher during deployment, spouses reported less satisfaction with being a parent during the same time period.

When service members returned home, most of these changes reversed: By the end of the reintegration phase, family relationships and well-being had generally returned to pre-deployment levels. An exception was observed among teen participants, who reported significantly lower-quality relationships with the deployed parent when the parent came home.

2. How do post-deployment outcomes differ between families that did and did not experience deployment?

Not all service members in the study actually deployed. By comparing the outcomes of families that experienced deployment to those of well-matched families that did not, the analyses attempted to identify the causal effect of deployment on family well-being. The results of these analyses were striking and unambiguous: Across a wide range of variables, there was little difference between the two groups by the end of the study.

The analyses found that preparation for deployment and communication during deployment were critical factors.

The exceptions were teens and children. In families that experienced a deployment, spouses reported more child difficulties (specifically, emotional conduct and peer problems) at the end of the study than their peers whose spouses did not deploy. Interestingly, this concern applied only to children younger than 11, not to teenagers. Neither teens' parents nor the youths themselves reported behavioral difficulties. But teens did report worse family cohesion and lower relationship quality with the non-deployed parent than did their peers in non-deployed families.

3. How well do characteristics of families and the deployment explain which families are doing better or worse when the service member returns?

The analyses found that preparation and communication were critical factors. For example, the more service members and spouses reported preparing for deployment (developing an emergency financial plan or buying life insurance), the higher their parenting satisfaction after deployment. The more frequently that spouses reported communicating with their partners during deployment, and the more satisfied spouses were with the amount of communication, the higher their marital satisfaction when the service member returned.

Across a wide range of variables, there was little difference between families that experienced deployment and those that didn't by the end of the study.

In addition, couples who left the military after deployment (and during the three years they were in the DLS) reported lower marital satisfaction and increased psychological symptoms by the end of the study. There was no way to determine whether these activities directly affect family functioning or whether more or less resilient families simply engage in different behaviors around deployments. These associations emerged even after controlling for family characteristics at the time of study enrollment, consistent with the view that the behaviors themselves influence family well-being.

The study's findings also suggested that service members' exposure to traumatic events during deployment, rather than separation from family itself, brought about any negative effects associated with being deployed. However, the relationship between traumatic experiences and post-deployment outcomes was complex.

Some outcomes differed depending on the type of trauma that the service member experienced during deployment.

Injury to the service member

Exchanging fire with the enemy

Witnessing or vicarious exposure to trauma

Implications for Improving the Well-being of Military Families

The current findings led RAND researchers to make a number of recommendations for improving the well-being of military families.

The DLS provides a robust data set that should enable further exploration of the issues and challenges that military families face. For examples, these data can be used to help understand the predictors of separation from the military, further explore the relationship between communication and deployment related effects, and assess the effect of frequent moves on military family outcomes.

The findings also highlight several areas where changes to current research strategies could result in improved data — both in terms of timeliness and quality — for making policy decisions that will help military families.

Although extremely valuable because of its analytical rigor and unprecedented scope, the DLS does have a few limitations. First, the survey was conducted during a period when operational tempo among U.S. troops was decreasing, combat zones were less volatile, and deployments were less dangerous compared with the years immediately prior. Second, most married service members eligible for the study had previously deployed by the time recruitment for DLS began. This means that families vulnerable to the most negative consequences from deployments may have left the military or divorced before the study began. The impact on first-time deployers may be very different from our findings about families with more experience in deployment. Finally, the study's focus was on families in married households, both with and without children, so the findings cannot be extended to single-parent household families or single service members.