Are America's Overseas Security Commitments Worth It? 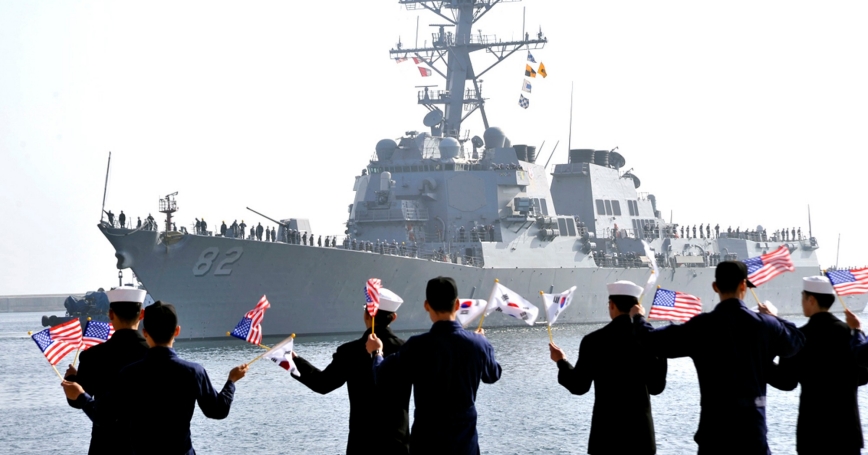 Photo by Republic of Korea Navy via Reuters

A growing debate has called into question the international security commitments of the United States, and whether their economic value outweighs their costs. RAND researchers used new data and advanced economic techniques to measure the returns on those commitments. Their analysis suggests the magnitude of those benefits could be substantial.

On a crisp January day in 1949, President Harry Truman stood before an inauguration crowd still recovering from want and war and envisioned a “world fabric of international security and growing prosperity.”

That idea, that America has an economic interest in promoting a stable and secure world order, has helped guide nearly seven decades of U.S. foreign policy. But a growing debate over America's role in the world has called into question that basic assumption. Are America's international security commitments really worth the cost?

Researchers at RAND used decades of economic data and new numbers on U.S. troops and treaties to test that question. They found strong evidence that the economic value of those overseas commitments likely exceeds their costs by billions of dollars every year.

“We wanted to know, Is this a good investment for the United States?” said Daniel Egel, an economist at RAND and lead author of the study. “Are these overseas commitments really benefiting the U.S. economy?”

On any given day, the United States has nearly a quarter of a million soldiers, sailors, airmen, and marines serving overseas, from Afghanistan to Zambia. It has treaties and other security agreements in effect with nearly three-quarters of the countries in the world, some of them dating to the days of steamships and mounted cavalry.

Ever since the Truman era, many political scientists have argued that the stability provided by those troops and treaties helps anchor world trade, to the great benefit of the U.S. economy. But pinning a dollar figure on the economic returns of those overseas commitments has proven surprisingly difficult.

A growing school of thought, the “retrenchment school,” now argues that those commitments are too expensive, the returns too uncertain. Some of its leading academic voices have called for cutting back American commitments by as much as 80 percent, pulling troops out of Europe, the Middle East, Africa, and Asia.

The debate has grown from a question of political theory to a focus of international politics. Given the stakes, researchers at RAND set out to produce one of the most rigorous estimates to date of the costs and benefits—“a necessary precursor to an informed debate,” according to Egel.

The researchers started by building an entirely new database of thousands of U.S. treaties and security agreements, an effort that took six months. They also obtained 50 years of data on overseas troop assignments.

They then merged those data sets with U.S. and global trade numbers. They tracked changes in the number and nature of U.S. security commitments between 1955 and 2004, and then matched them to any subsequent bumps or dips in the trade numbers.

They found clear evidence that those overseas commitments do indeed strengthen trade between America and other countries, likely worth tens of billions of dollars every year. In fact, they estimated that doubling the number of treaties could expand U.S. trade, especially imports, by 34 percent. Doubling troop numbers would increase trade by up to 15 percent.

Those U.S. security commitments also appear to boost overall world trade, the study found: Countries with U.S. commitments trade more with each other than they would otherwise. But the study found mixed evidence on whether those commitments lower the costs of international trade, and no real evidence that they change the likelihood or severity of conflict in other countries.

“Even just a statement to another nation that we agree to be friendly and peaceful—even that can have an impact” on trade, said Jennifer Kavanagh, a political scientist at RAND who worked on the project. “That was the real question: What is the effect of this broader definition of U.S. presence?”

The retrenchment school has estimated that its proposed 80 percent cut to U.S. commitments would yield economic savings that could amount to around $126 billion a year. The RAND researchers found that even a smaller 50 percent cut would cost the U.S. economy as much as $490 billion in lost wages and profits.

These estimates may be, if anything, conservative.

The study provides a solid foundation for debating the value of America's overseas commitments, the researchers wrote, but it's not likely to be the final word. For one thing, it did not capture the possible long-term economic benefits of freeing up money from overseas commitments and investing it elsewhere. But it also only looked at direct effects on trade, not on foreign investments or other international capital flows—meaning that its estimates may be, if anything, conservative.

Those limitations, however, are not likely to change the study's bottom-line conclusion, the researchers wrote. A wholesale cutback of overseas commitments would almost certainly cost the United States more than it saves, perhaps by as much as 3-to-1.

“Policymakers who reduce these commitments would face not only the immediate problems of how and where to make the reductions,” the researchers concluded, “but also the future problems of a poorer United States.”