Today, there is intensifying debate over the resources devoted by the United States to its overseas commitments, with important voices calling for wholesale and unprecedented retrenchment in the face of mounting fiscal pressures. Using advanced econometric techniques and new data on overseas security commitments, RAND researchers explore whether and to what extent the United States derives economic benefits from its overseas security commitments. 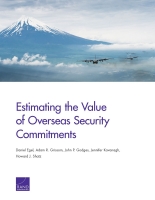 Since the 1940s, U.S. international leadership has been justified, in part, by claims of a positive relationship between global stability and domestic prosperity. However, the economic returns from U.S. overseas security commitments have proved extraordinarily difficult to measure. Some policymakers and academics now support reducing or eliminating such commitments, especially in this era of mounting fiscal pressures.

RAND researchers use advanced econometric techniques and new data on U.S. overseas security commitments to explore whether and to what extent the United States derives economic benefits from these commitments. The analysis finds that the commitments have positive and statistically significant effects on both U.S. bilateral trade and non-U.S. global bilateral trade. The authors find mixed evidence of the effects on trade costs and no evidence of any effects on civil conflict, either for better or for worse.

The authors estimate that a 50-percent retrenchment in U.S. overseas security commitments could reduce U.S. bilateral trade in goods and services annually by as much as $577 billion — or 18 percent — excluding trade with Canada and Mexico. Based on conservative assumptions, the resulting annual decline in U.S. gross domestic product (GDP) would be $490 billion (in 2015 U.S. dollars). Others suggest that the GDP benefits of an 80-percent retrenchment could reach $139 billion, but that is less than one-third of the estimated economic losses from just a 50-percent retrenchment. U.S. policymakers should carefully weigh the potential losses against the potential gains when considering large-scale retrenchments of U.S. overseas security commitments.

Our Analysis Indicates That U.S. Overseas Security Commitments Offer Economic Benefits, and That the Magnitude of These Benefits May Be Very Large